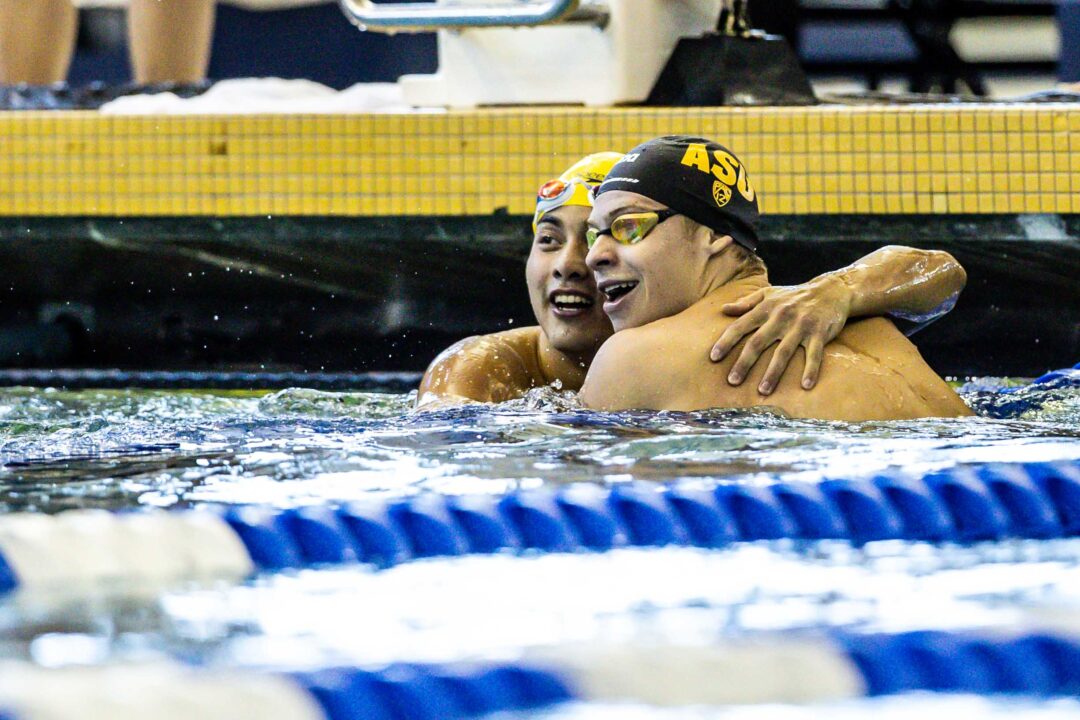 Destin Lasco and Leon Marchand will battle head-to-head in tonight's 200 IM after swimming two of the four-fastest times ever in this morning's prelims. Archive photo via Jack Spitser/Spitser Photography

If tonight’s finals from men’s NCAAs are anything like the first two sessions, we’re in store for some extraordinary performances.

Both relays last night featured new U.S. Open and NCAA records, and that momentum carried forward into this morning’s prelims as we some blistering times come in the 500 free, 200 IM and 50 free.

Tonight, things could get crazy.

500 Free: The Fastest Man Ever, The Defending Champ, & The Freshman

Smith, who set the all-time record of 4:06.32 at the 2020 SECs and then matched it at last year’s conference championships, was a tenth shy of Magahey in 4:08.07, and appears to have changed things up and saved everything for NCAAs this season.

Magahey sits second in 4:09.22, with his freshman teammate Matt Sates leading the pack in 4:08.73. Sates’ time makes him the second-fastest freshman ever (trailing only Magahey) and the eighth-fastest performer overall, giving tonight’s final three of the eight-fastest swimmers in history.

Both Sates and Magahey have shown an ability to build their way through this distance, both notably negative-splitting the race this morning.

Smith has traditionally been more aggressive in the 500, out in 2:02.1 at the halfway mark when he first broke the U.S. Open Record and then 2:00.8 when he matched it last year. At the 2021 NCAAs, when he fell to Magahey, he was much more conservative (2:04.2) opening up and it ended up costing him.

Tonight, look for Smith to get out fast (he led the field this morning with a 2:02.6 opening 250) and Sates and Magahey try and run him down over the closing yards.

We also can’t overlook freshman Luke Hobson, a member of the Texas Longhorns who have been absolutely on fire so far at the championships. Hobson came into the meet ranked second in the country behind Sates at 4:09.72, and had a solid prelim performance in 4:10.38.

Joining Sates and Magahey sub-4:10 this morning was Smith’s Gator teammate Alfonso Mestre, who figures to be another player tonight after going 4:09.74 in the heats.

Then, in the prelims, we saw California sophomore Destin Lasco (1:38.71) and Arizona State freshman Leon Marchand (1:38.83) both join that elite club, becoming the third and fourth-fastest performers in history with more to come in tonight’s final.

Lasco engineered a big time drop last season to place third in the event as a freshman, clocking 1:40.01 to trail Casas and Cal’s Hugo Gonzalez.

This season, Lasco came into NCAAs ranked seventh with his time of 1:41.53 from the Minnesota Invitational, and has clearly hit his taper after that 1:38.7 performance.

The odds-on favorite to win the 200 back, Lasco was notably significantly slower than Marchand (24.31) and third-place qualifier Carson Foster (24.42) on the backstroke leg this morning, splitting 25.17, but closed with blazing back-half splits of 27.99 on breast and 23.33 on free.

It will be interesting to see if Lasco puts more gas on the backstroke leg tonight, or if he bides his time again and saves a big push for the second half. Marchand was the fastest swimmer to the 100-yard turn in the prelims in 45.74, and Lasco was the second-slowest among ‘A’ finalists in 47.39. On the back-half, Lasco out-split the Frenchman 51.32 to 53.09.

And given that both men were within range of it in the prelims, it’s plausible we see Dressel’s all-time record of 1:38.13 fall tonight.

That swim from Foster is actually a massive best time, having previously been 1:40.99 last season, but he’s likely racing for third tonight after what Lasco and Marchand did.

Nine men cracked 19 this morning, led by Cal’s Bjorn Seeliger, who scorched a 18.45 after swimming the fastest 50 back time ever on last night’s 200 medley relay.

Between Seeliger, Tennessee’s Jordan Crooks and the Texas duo of Drew Kibler and Cameron Auchinachie, four of the nine-fastest swimmers in history will be racing in tonight’s final, with three of them swimming the times that put them there in the prelims.

Crooks, who matched Kibler in the heats in 18.60, was 18.53 at the SEC Championships in February to become the fastest freshman ever and sixth overall.

Seeliger and Virginia Tech’s Youssef Ramadan (fifth seed, 18.79) are the only two returning ‘A’ finalists from last season, as Auchinachie wasn’t competing for Denver, Kibler was racing the 500 and Crooks was still in high school.

Tonight’s race is fairly wide open, but Seeliger has to be the favorite after his prelim swim, and Auchinachie might be his biggest challenger after he threw down a mind-boggling 18.08 anchor leg on last night’s 200 medley relay.

Texas might have become the favorite given the performances of Kibler and Auchinachie, not to mention their entire roster is firing on all cylinders, while Virginia has also looked solid after setting the American Record in this event at ACCs. The Cavs had four men finished 21st or better in the 50 free heats, including Matt Brownstead (18.85) making the ‘A’ final, Matt King (19.08) making the consols and Connor Boyle (19.18) earning first alternate status.

NC State and Florida will also be factors, with the Wolfpack notably putting three men into the top-16 of the 50 free, including Nyls Korstanje in the ‘A’ final at 18.94. The Gators have Adam Chaney, Will Davis and Eric Friese all swimming well, too.

Brownstead took full advantage of open water on one side. Stayed under that wave & stuck the finish.

Curry was fantastic at the turn. That did it for him. Well done.

lasco and marchand … i ship them 😍

Coach Dave Durden and I met in an ice cream shop just outside of Berkeley about 6 months ago. I introduced myself and I told him I was a big fan of his. He showed me his plan for night 2 of NCAA championships. We looked over it for hours and I finally gave him the OK. I’ve never seen him since. Coach Durden, if you’re reading this, know that I respect you. And quite frankly, I love you. I’ll never forget what we had.

We need the Durden slipping on the deck GIF

GTech needs to re-tile that bulkhead

The whole pool could use a sprucing up to be honest. Chlorine is brutal in there, and the whole thing is yellow – not a great look.

No hurry. Their reference point is Bobby Dodd Stadium

Diving well was absolutely dark and lifeless.
Quite a drag for the prelims, for sure

And plenty of partial and blocked view seats. It reminds me of an old, vintage-era baseball park.