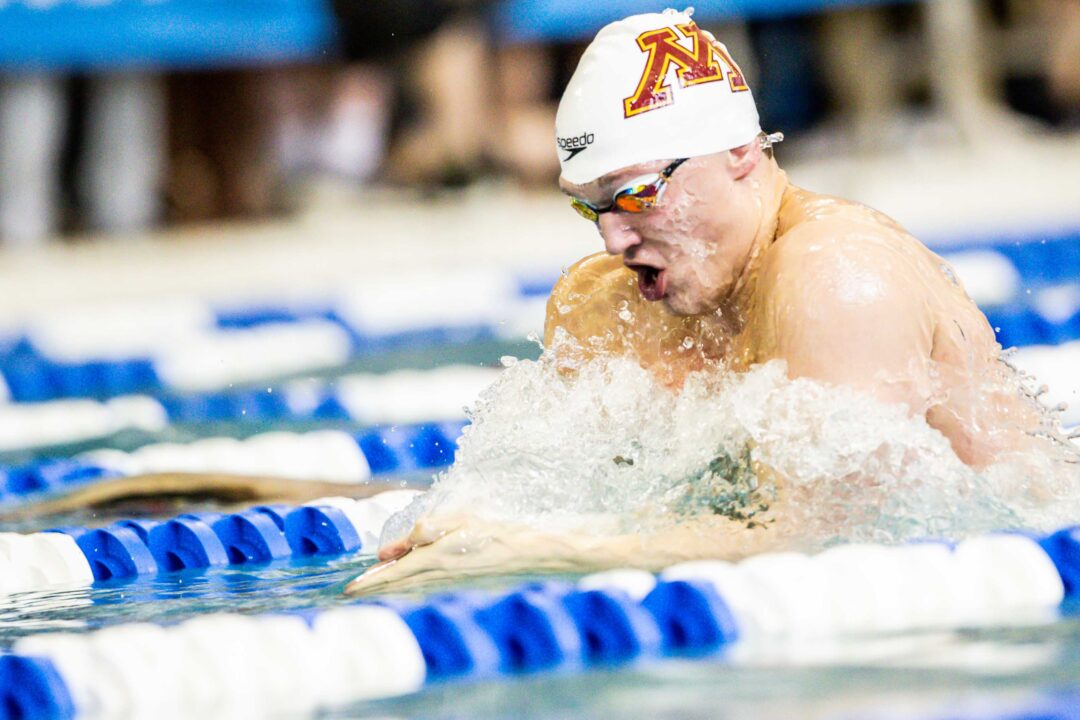 Things will continue to heat up on the penultimate night of finals from the 2022 Men’s NCAA Division I Championships in Atlanta, with some salivating showdowns on the docket and a tight team race that has seen the momentum swing into Cal’s favor over the last 24 hours.

Here’s a quick look at each of the six swimming events tonight:

400 IM: How Many Will Dip Under All-Time Record?

Arizona State freshman Leon Marchand was already the favorite in the 400 IM coming into the meet, and that sentiment only grew on Thursday as the Frenchman broke Caeleb Dressel‘s NCAA and U.S. Open Records with a blistering 1:37.69 in the 200 IM.

Marchand qualified fifth in 3:37.97, and after his 200 IM swim, he’ll have something special in store for tonight. Kalisz’s record looks as good as gone, the question is then if Foster or Gonzalez can challenge him.

Finke, whose best time is 3:36.90, will need a massive drop to challenge for a top-three finish this year.

Last night two of the three individual winners were freshmen (Marchand and UGA’s Matt Sates), and Stanford’s Andrei Minakov looks well on his way to becoming the third first-year to win a national title tonight in the 100 butterfly.

Minakov, the 2019 World Championship 100 fly silver medalist, came into the competition as the only swimmer sub-44 this season, having clocked 43.90 at Pac-12s, and lowered his PB down to 43.77 in the prelims.

NAG record watch will be in effect as well after Wolfpack freshman Aiden Hayes broke the 17-18 mark this morning in a time of 44.78 to qualify eighth for the ‘A’ final.

Last year we saw Florida’s Kieran Smith fall as a heavy favorite in the 500 free on Thursday before triumphing the following night in the 200 free. Will history repeat itself?

Smith was only fourth in the 500 last night, while Georgia freshman Matt Sates roared to victory with one of the fastest swims ever in 4:06.61.

Seven of the eight ‘A’ finalists swam the lead-off leg for their respective teams on Wednesday night’s 800 free relay, with the only one missing being LSU’s Brooks Curry (the Tigers didn’t race the event).

Here’s a look at how the seven of them stacked up:

Judging by that, Kibler, Smith and Sates should have a very tight race tonight in the 1:30-low-to-mid range, with House likely in that mix as well.

Curry is coming off a win in the 50 free on Thursday, so he’s a good candidate to provide some outside smoke from Lane 8, though he might fall off on the back-half. The junior is the only swimmer in the top-16 this morning to split over 24 seconds on the third 50.

Max McHugh busted through the elusive 50-second barrier this morning in the 100 breaststroke, becoming the second-fastest performer in history with a time of 49.95.

The Minnesota senior will now take aim at the U.S. Open Record of 49.69, set by Indiana’s Ian Finnerty, in tonight’s final. McHugh also has a chance to win the event for the second year in a row.

McHugh is the big favorite for the title, while the Cal duo of Liam Bell (50.66) and Reece Whitley (50.87) will be looking to get into the top-three and shut out Texas rival Caspar Corbeau (50.77). The Cal men sit 2-4 right now, with Corbeau sandwiched between them in third. These points will be crucial with the team race tightening up.

All eight ‘A’ finalists were separated by just 36 one-hundredths in this morning’s 100 back prelims, with Indiana’s Brendan Burns (44.36) leading the way and Ohio State’s Hunter Armstrong (44.72) rounding out the field in eighth.

Burns and Armstrong currently rank 1-2 in the nation this season, having been 44.31 and 44.36, respectively, at Big Tens, while the next fastest is NC State’s Kacper Stokowski, who went 44.39 at ACCs and is seeded third out of the prelims in 44.44. (Georgia’s Luca Urlando is actually faster than Stokowski this season, but isn’t racing the event here.)

Florida’s Adam Chaney tied Stokowski’s season-best to sit second in the prelims in 44.39, and then 200 IM runner-up Destin Lasco is ranked fourth after clocking 44.48.

We’ve also got Nicolas Albiero, Dean Farris and Bjorn Seeliger sitting at 44.5. Farris and Seeliger have both looked strong so far in Atlanta, including the Swede Seeliger ripping the fastest 50 back time ever on Cal’s 200 medley relay (20.08).

The relays have been blazing-fast so far and it’s difficult to predict who will emerge in tonight’s 400 medley.

Florida’s already won two relays, including the 200 medley, and could have the upper hand here. The Gators have ‘A’ finalists in the 100 back (Chaney) and 100 breast (Dillon Hillis), and Eric Friese has been lights out on the relays so far (though he missed earning a second swim in the 100 fly). Kieran Smith is a reliable anchor.

Texas has some different options and will challenge, as will Cal and NC State.

For the Longhorns, Alvin Jiang scratched the 100 back ‘B’ final to rest for this race, so we’ll have to keep an eye on if his presence pays off (he’s also swimming the 100 fly consol earlier on). Jiang will likely swim fly and Cameron Auchinachie will be on backstroke, and they’ll be the key legs.

Corbeau on breast and Kibler or Daniel Krueger on free will be among the fastest in the field.

Indiana, Ohio State and Stanford are the three fastest teams in the nation this season, but IU and OSU’s breaststrokers have been a bit off. For the Cardinal, if Ron Polonsky is near his 50.6 breast split from Pac-12s, they’ll be in the mix. Polonsky swam the 400 IM today, not the 100 breast, finishing a second off his PB and making the ‘B’ final.

Honest question… If Minakov wins tonight, does he get the Russia/Ukraine question?

Yes. He will get the Coveted YARDS record for Russia/Ukraine.

I would hope he was given a minimal PR briefing to just say “I am here to talk about swimming” if the question comes up. Words could easily be taken out of context here …

Anyone have a link to stream? Espn giving me a lot of trouble these past few days

I thought Minakov was a redshirt freshman, but the results have him listed as a sophomore. Will be interesting to see how his eligibility plays out

He will have 4 years of eligibility (including this one). The fifth-year of competition is only given to those who actually swam in 2020-2021. I know he was enrolled at Stanford for some duration last year (attending remotely). so either way, Minakov’s eligibility clock has started.

I saw them posted earlier. Wish I remembered what thread exactly but I’m too drunk right now.

So whose got more room to move up in the 400MR tonight – Texas seeded 6th??? Where was CAL seed coming in?. Jury is still out for me on timed finals on relays – comments?

I like timed finals personally. I would have picked Texas had Cam and Alvin been 44’s this morning, but Texas apparently needs to work on relay exchanges. They should be very aggressive tonight because they need a 60 point lead going into day 4, and one way for that to happen would be Texas 1st and Cal 3rd or 4th, but I don’t believe that is going to happen

If Cal is within 40 points of Texas it’s virtually over, so finishing behind Cal vs getting DQ’s doesn’t affect the outcome.

Texas has lost two relays on exchanges. That can’t happen

In a perfect world, I’d want prelims for relays. But with a four-day meet and very limited rosters, letting the athletes rest is better.

I like prelim relays… but I think you should have to swim the same 4 in prelims that you swim in finals.

How do you think changing the order of events and going to Timed finals is impacting performance? Should these amazing times/records have astrisks – before new format vs after – before Covid open lanes vs after? Rules and equipment (blocks) certainly have improved times over the years…