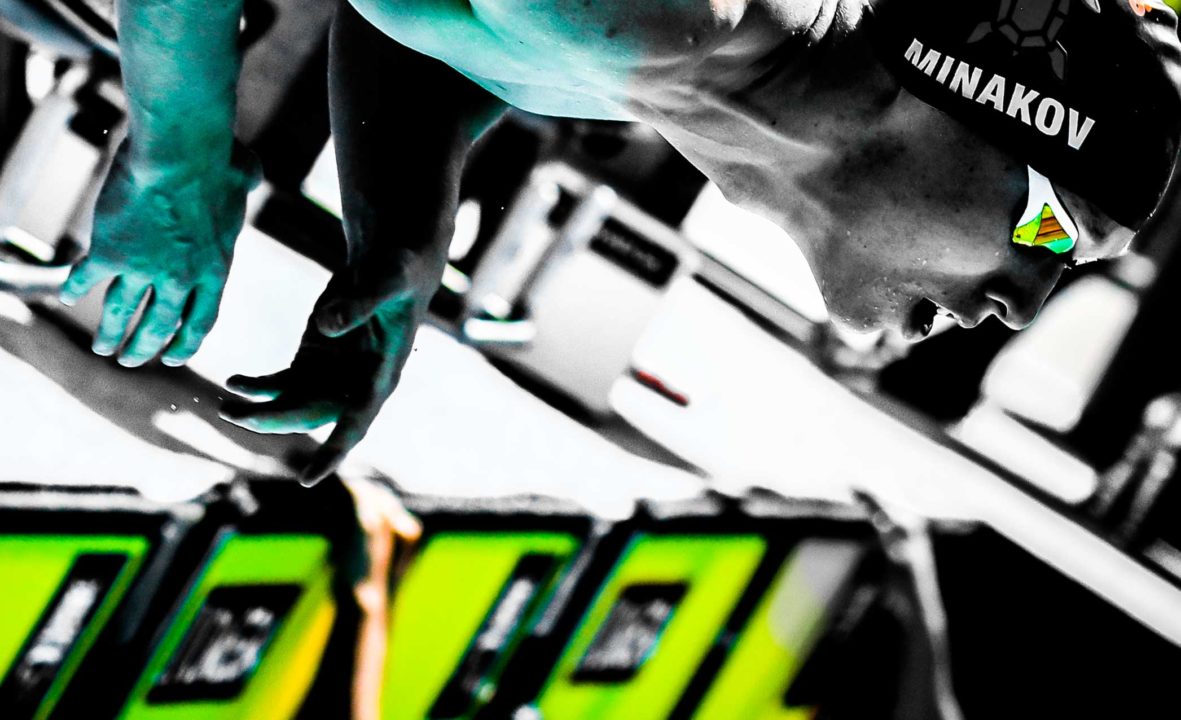 Stanford's Andrei Minakov comes into NCAAs as the fourth fastest man of all time in the 100 fly and the only swimmer in the field under 44 seconds. Current photo via Jack Spitser/Spitser Photography

While defending NCAA champion Ryan Hoffer has graduated and now competes for the ISL’s DC Trident, the 100 fly continues to be one of the strongest and deepest events in men’s NCAA swimming.

Stanford redshirt freshman Andrei Minakov, the Pac 12 champion and 2019 LC Worlds silver medalist, comes in as the top seed and only swimmer under 44 seconds this season. His 43.90 from the finals at Pac 12s makes him the fourth fastest performer ever, behind only Caeleb Dressel, Joseph Schooling and Tom Shields and makes him the favorite heading into the meet.

He will not be unchallenged, however, as Virginia Tech sophomore Youssef Ramadan has been on fire all season and comes in as the second seed. His 44.08 earned him the ACC title last month, and he enters these NCAA championships seeking some redemption from last year’s NCAAs, where he was disqualified in the prelims for a false start.

Coming in with the third seed is another sophomore, Georgia’s Luca Urlando, who won the SEC title in 44.41. Urlando, who has had a strong sophomore campaign for Georgia after a pair of heartbreaking third place finishes in the 100 and 200 fly at US Olympic Trials last summer, is bringing a lot of momentum into these championships after posting lifetime bests in both the 100 and 200 fly at SECs.

Ramadan is not the only Hokie with A final potential, as his senior teammate Antani Iavanov comes in as the 5th seed in 44.73 after finishing 6th last year in 44.67. Their ACC rival Nyls Korstanje comes in as the 4th seed after posting a 44.50 in a surprise appearance at the Tar Heel Last Chance meet less than two weeks ago. Another ACC swimmer, Louisville fifth year Nick Albiero, comes in with the seventh seed with his 44.79. Albiero finished runner-up to Hoffer last year in what is his lifetime best of 44.32, and he should have a strong back half of the race as he comes into this meet as the top seed in the 200 fly.

Also returning from last year’s A final is Florida junior Eric Friese, who comes in as the 9th seed after finishing runner-up to Urlando at SECs last month. Friese finished 7th at this meet last season with a 44.79, which stands as his lifetime best. Last year’s 9th place finisher, Indiana sophomore Tomer Frankel, comes in just ahead of Friese on the psychs, seeded 8th in 44.81.

Frankel was the runner-up finisher at the Big 10 Championships this season, however, finishing behind Ohio State Australian freshman Alex Quach. Quach comes in as the 6th seed, after his 44.74 in the Big 10 finals was a season best by well over a second, indicating that he may not have much further to drop this season.

Several scorers from last year’s meet also sit way down the psych sheet, including a pair who will race before the circle seeded heats get under way. Missouri senior Danny Kovac, who finished 5th last year in 44.66, comes in as the 18th seed with a 45.31. Kovac was well off of his season bests in all of his races at SECs, as were many of the Missouri swimmers who had already secured likely NCAA invites, which is perhaps a signal that he is saving his best for next week.

Texas fifth year Alvin Jiang, who finished 4th at last year’s meet, comes in as the 30th seed in 45.56, over 6 tenths slower than his seed entering last year’s NCAAs. Indiana’s Brendan Burns, who experimented with the 200 fly/back double at Big 10s and thus did not race the 100 fly at his conference championship, comes in as the 25th seed in 45.49 and may contend for an A final appearance from the early heats. Last year Burns finished 13th in 45.53.

Dark horse: Dalton Lowe-Louisville. Sophomore Dalton Lowe comes into the meet as the 16th seed courtesy of his 45.26 from ACCs, over a full second drop from his freshman year. What makes Lowe so dangerous is his top end speed is as strong as anyone in the field, having split 19.50 on Louisville’s 200 medley relay at ACCs, a split so fast that only Olympic Gold medalist Joseph Schooling has ever been faster. If Lowe can figure out the back half, he certainly has A final potential.

How can Hoffer be the defending champion if he’s not racing?
I would use the terminology “last year’s champion” in such instances.

I like your order but Ramadan and Minakov will be below 44.