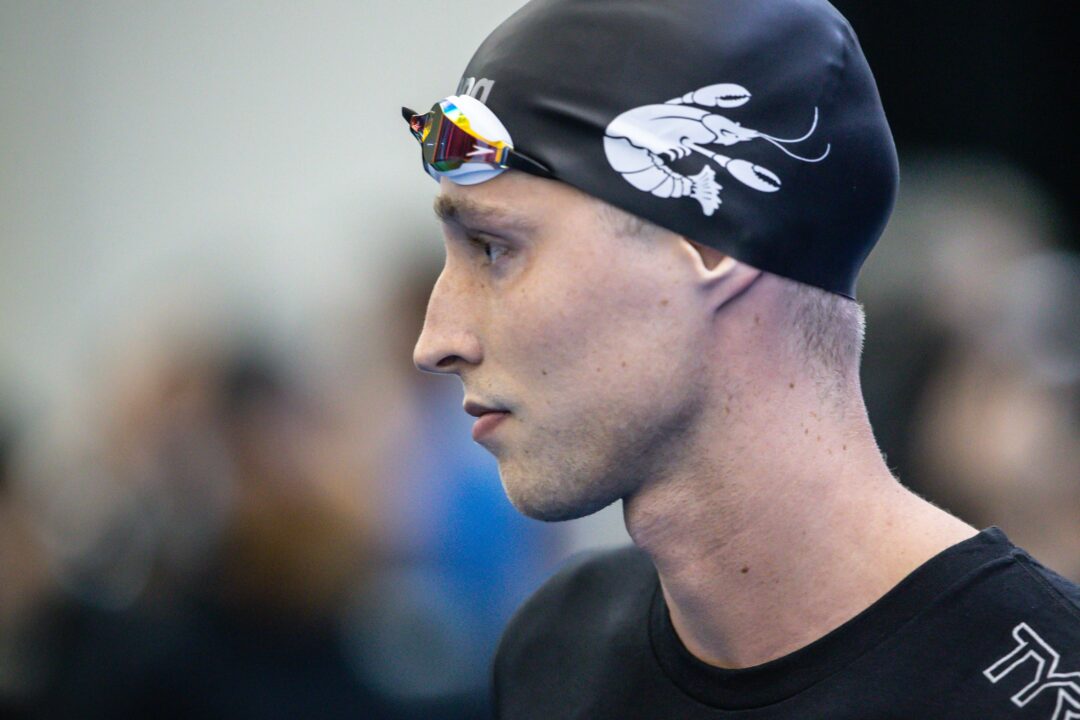 Sam Stewart closed out the 2022 Futures Championship in College Station with bang, roaring to a huge new personal best of 1:56.91 in the 200 IM. Stock photo via Jack Spitser/Spitser Photography

Sam Stewart closed out the 2022 Futures Championship in College Station with bang, roaring to a huge new personal best of 1:56.91 in the 200 IM. Stewart won the event decisively, blowing away his personal best of 1:57.70, which he had just swum at the International Team Trials in late April. He swam a great race all around, but was particularly strong on the middle 100 last night, splitting 29.09 on backstroke and 33.92 on breaststroke. He was 25.02 on fly and 28.88 bringing it home on freestyle.

Stewart is now the #9 American all-time in the event, suddenly bringing himself into the conversation to make international rosters in the event. SwimSwam reached out to Stewart to ask about his training. He began training at Texas A&M two months ago, after spending the last couple years training under his mom at his home club – the YMCA Hub Fins in Mississippi.

Yes, I’ve been doing a mix of Jay’s and Jason’s practices. I think the change of training environment. I have been training at home in Mississippi with my mom since 2019. We spent those years improving my technique on all four strokes and my strength in the weight room. I think I’ve had big swims in me for a while but it took a change of environment to pull it out. I improved as an athlete under my mom and Jason and Jay were able to sharpen the edges. – Sam Stewart on his current training

Mansfield Aquatic Club 17-year-old Ava Topolewski had a phenomenal race, winning the women’s 1500 free in 16:47.93. The George Washington recruit dominated the field, taking 8 seconds off her previous best with the performance. The men’s 800 free was won by Texas A&M’s Treu Dickey, clocking an 8:15.06.

Feels like an appropriate place to ask this. Anyone know why Track & Field will bring 3 athletes per event but swimming only brings 2?

As far as anybody can tell, because track & field never had the problems that swimming did of one country being so dominant that giving them a shot at all of the medals stymied development of other countries’ swimming systems.

I kind of like the Euros system myself, where they can take more swimmers, but only 2 can advance.

And does track open it up to having 4 athletes if you’ve got a defending champ? There were 4 American men in the 100m final, for instance.

And idk would the Euro system really be better? Sorta just pushes off the biggest stakes for that second spot to the earlier rounds at the actual meet, when it could just be at the qual meet.

He’s had such an interesting/unique swimming career path

Would have made the Olympic team 12 months ago

Definitely wouldn’t count Andrew out – he noted that the 200 IM was a prime focus of his for Paris, and I wouldn’t count him out of the WR race with better conditioning and a return to full training