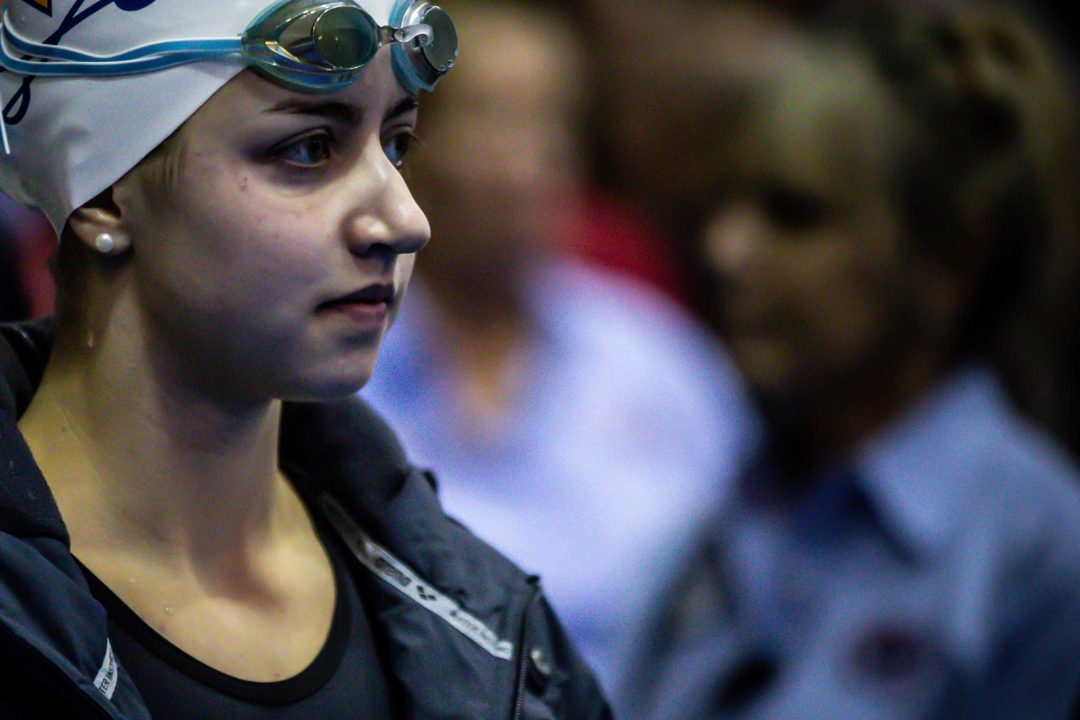 The 50 free will be a bloodbath this year with Kate Douglass and Maggie MacNeil leading the charge, seeded only 0.02 seconds apart. Current photo via Jack Spitser/Spitser Photography

‘Kate Douglass v. Maggie MacNeil‘ will be one of the biggest storylines to watch at the 2021 Women’s NCAA Swimming & Diving Championships. Beginning with the 50 freestyle, the two swimmers, arguably the two biggest stars of the meet, will go head to head in all three individual events (50 free, 100 free, 100 fly).

In the 50 free, Maggie MacNeil placed fourth in the event at the 2019 Championships, and in the absence of the three podium finishers from that meet (Weitzeil/Brown/Comerford), she certainly has a path to victory in the event. The biggest obstacle standing in the way: Kate Douglass.

In the 2 years since the 2019 NCAA Championships current Virginia sophomore Kate Douglass has risen in the ranks of a number of events. The 50 freestyle is no exception as Douglass has swum the top time in the NCAA this season, hitting a 21.42 back in November 2020.

While Douglass’ 21.42 would have garnered medals at the last 2 NCAA Championships, so too would Maggie MacNeil‘s current season-best of 21.44 that she swam at Big Ten’s a few weeks ago. That swim for MacNeil might be second to Douglas this season, but she has proven her ceiling to be quite a bit higher.

MacNeil was a 21.30 in her sophomore year to win gold at Big Ten conference championships. MacNeil had a shot at picking up her first NCAA medal in the event in 2020 had the championships not been canceled as a result of the coronavirus pandemic.

MacNeil and Douglass will certainly be the ones to watch at this championship meet, having recently delivered dominant performances at their respective conference championships. Not only will they be exciting to watch individually, but every time we see them race, they will racing each other. The duo picked the same three events for NCAAs, beginning with the 50 freestyle, they will also both race the 100 free and fly.

While they are both fairly sure bets to make it to the final, their bids for the crown won’t be without threat from Missouri senior Sarah Thompson who has been steadily improving over the course of her NCAA career.

Thompson has now made her way to a third seed for NCAAs in the event when she swam the fastest time at SEC championships. Thompson’s 21.57 was better than anyone else in the field, but she swam the time from B finals, unable to claim gold. The 21.57 was a best time for Thompson and the third-fastest time in the NCAA this season.

If Thompson is to deliver a podium finish this year in the event, she will need to fend off a solid group of sprinters who will be making their bid to upset the top three. Among those also in the mix are Kalia Antoniou and Cora Dupre from Alabama, Kylee Alons and Katharine Berkoff from NC State, Katie Mack from Florida, and Megan Keil from Missouri.

Kalia Antoniou and Cora Dupre have been a part of Alabama’s sprint resurgence over the past few years and have earned top seeds for the 50 at NCAAs 2021. Going 1-2 at SECs this year, Antoniou was a 21.69 for 4th seed and Dupre was a 21.82 to earn 6th seed.

Neither Antoniou nor Dupre have raced the event at NCAAs before as Antoniou on swam relays in 2019 and Dupre has only raced during the last two NCAA seasons.

NC State’s Kylee Alons joins Maggie MacNeil as the only other swimmer from the 2019 NCAA final who will be back to swim the event this year. 2 years ago, Alons swam to an 8th place finish in the 50 freestyle with a 21.89. Her personal best time in the event to date, however, is a 21.63 from last year. With one NCAA final in the books and a season-best of 21.70, Kylee Alons certainly has a shot to move up and fight for a spot on the podium.

Another top-seeded swimmer in the event, Katie Mack joined Antoniou and Dupre on the SEC podium a few weeks ago with a 21.85 for bronze. Mack swam a season and lifetime best of 21.82 in the prelims to earn tie Dupre for 6th fastest in the country the season.

Not far off, Missouri’s Megan Keil and NC State’s Katherine Berkoff have hit 21.83 for 8th and 21.84 for 9th, respectively. While Berkoff hasn’t yet raced at an NCAA Championships, Keil swam at the 2019 meet in the 200 yard relay for Missouri.

Darkhorse: Morgan Scott, Alabama, Junior – Scott is currently tied with Tennessee’s Mona McSharry for 18th seed in the 50 free with a 22.07. Scott gets this selection based on her solid 100 freestyle at SECs a few weeks ago. Scott 48 for the first time in prelims with a 47.85 and then came back to win the finals in a 47.50 for a new Alabama record. Scott also raced the 50 free, hitting a 22.07 to fin the B final which would have been a 5th place finish in the A. If she can keep up the momentum and knock some more time off her 50 free PB, she could certainly get into the NCAA final and wind up with a solid finish.

She’s never been 21-low so not as good as Douglass or MacNeil. Also, not a great prelims swimmer so might miss the A-final.

I don’t think so! I did pick her for 4th in fly though

Douglass for the crown over MacNeil.

Do we know for certain that Macneil is going all-in on NCAAs? I doubt that she is so I expect her to swim like at the conference meet.

Why wouldn’t she? She’s already made the Olympic team

True… However she may wish to try for another individual event, 100 free is stacked but 50 free wide open. Plus cement her status on 4×1 free. I wonder though if she’ll even go to trials as she’ll have to quarantine for 2 weeks on entry to Canada…?

No chance. Maybe 20 mid. She’s not a second faster than any American

She has great starts turns and underwaters

I can’t believe Douglas isn’t swimming the 2 IM. I get it from a points perspective it’s just crazy.

DeSorbo knows where the points are. Hoos are playing the board.

And maybe he thinks she will do better in the 50 and train her for it more now? Maybe this means we’ll see something great from her in the 50.

Bruh she didn’t even win at acc’s….

Alabama is putting 3 into the A final here

As much as I not no darn BAMA fan, I thinks it would be great for the sport to have one school pop 3 in the A Final! Sick and tired of the A, B and worthless C final in conference meets which is a “participation prize” for them what is not too good. I says go GIRL VOLS!

The c final in the conference meets is not worthless. It’s all about rewarding team depth, and team depth wins conference championships.

Who is this SwimFani and what is his or her obvious need to troll all things Tennessee?