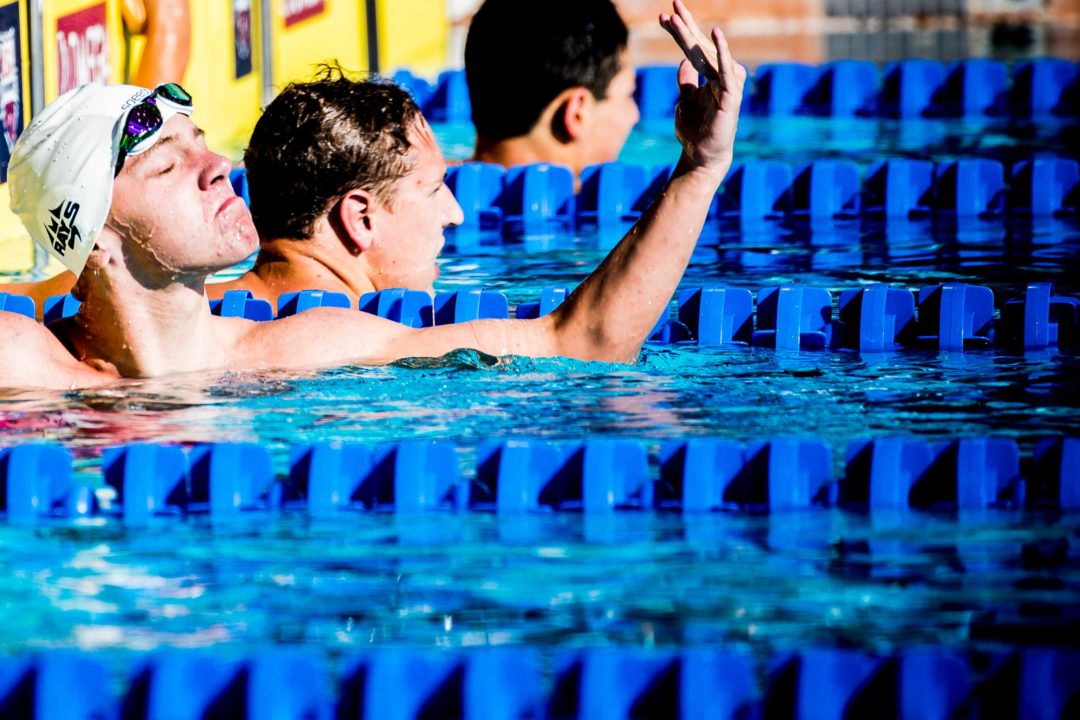 The men's 200 fly final is one of the most highly anticipated races of the night. Mason Manta Rays' Carl Bloebaum led prelims this morning with a 1:59.57. Current photo via Jack Spitser/Spitser Photography

Tonight marks the first finals session of the 2021 U.S. Olympic Trials Wave I.

Keep refreshing this page for live, event-by-event updates of all the action from Omaha.

This evening we’ll see the 100 freestyle, 200 butterfly and 100 backstroke finals along with along with the fastest heats of men’s and women’s 800 freestyles.

A refresher on the Wave I format: the top two finishers in each of tonight’s ‘A’ finals will advance to the Wave II Trials from June 13-20. Since the official Trials qualifying period is now over, a swimmer hitting a Wave II cut here won’t earn them a spot next week, only a top two finish.

The men’s 200 fly final is one of the most highly anticipated races of the night. Mason Manta Rays’ Carl Bloebaum led prelims this morning with a 1:59.57. The swim was both a lifetime best, and under the Wave II cut. Although hitting the Wave II cut doesn’t qualify Bloebaum for the Wave II meet, he was one of only 2 swimmers to hit a Wave II standard in this morning’s prelims. Bloebaum is the top seed, but the field is incredibly tight. Mizzou’s Micah Slaton, SwimAtlanta’s Sebastien Sergile, and NC State’s Noah Henderson were all under 2:00 as well this morning.

NCAP’s Camille Spink led the women’s 100 free this morning, swimming a personal best of 55.63. Spink was the only swimmer under 56 in the field this morning, though based on entry times, she may have a much tougher race than the heat sheet signals tonight. The top 3 seeds tonight – Spink, Kristina Paegle (ISC), and Zoe Skirboll (RXA) – are all highschoolers.

There’s a battle brewing in the women’s 200 fly as well, with NAC’s Alex Massey and Texas’ Emma Sticklen swimming only 0.19 seconds apart this morning. Sticklen is a National Junior Team member in the 200 fly.

It was a pair of high schoolers that were the first Wave I swimmers to advance to next week’s Wave II meet. Nation’s Capital 16-year-old Camille Spink got out to a roaring start, outdoing her prelims performance with a 26.29 on the first 50. The race appeared to tighten a bit through the first half of the 2nd 50, but Spink extended her lead heading into the finish. Her swim makes her #13 all-time among 15-16 year old girls. Paegle also swam a personal best to grab the 2nd spot in Wave II.

Ohio State’s Amy Fulmer got the ball rolling early, taking the B final of the race with a lifetime best 55.91. Her time would have tied her for 2nd in the A final.

Patrick Sammon had an incredible turn to help fuel this win. He went into the 50m wall not looking like the leader, but managed to get his feet onto the wall 2-tenths of a second ahead of anyone else. Sammon then held strong with a very slight lead through the 2nd 50, extending into the finish to touch as the only 49 in the field. The swim was a personal best for Sammon.  NC State’s Luke Miller also punched his ticket to Wave II, swimming a best time of 50.05. Miller was 7th at the turn, but turned on the jets coming home, and made a final push right at the end.

In an incredible turn of events, the 7th seed won the race, and the top seed from prelims finished last in the heat. Ohio State’s Katie Trace, in a classic display of “outside smoke”, led led for the majority of the race. National Junior Team member Emma Sticklen took 2nd again in finals, but swam almost a second faster.

The race was also a photo finish, with Trace, Sticklen, and 3rd place finisher Martina Peroni all touching within just 0.04 seconds of each other. Peroni out-split Sticklen on the final 50, but Sticklen was just narrowly able to hold her off. Trace actually touched in a tight 3rd at the 150 mark, but was just able to overtake the other two on the final length.

Nation’s Capital’s Eleanor Sun was a force in the B final, taking the heat with a 2:13.76 to touch as the only swimmer in the heat under 2:15.

Mason manta Rays’ Carl Bloebaum doubled down on his lifetime best prelims swim, tearing to a new personal mark of 1:58.90. The swim advances Bloebaum to the Wave II meet next week, and moves him up to the #18 American in the race in 2021. Bloebaum held tight with the field early on, and pulled away from his opponents as they approached the finish.

5th seed Colby Mefford, a Cal swimmer, also finished strong, holding on to touch as the only other swimmer in the field to swim under 2:00. Sebastien Sergile and Micah Slaton tied for 3rd at 2:00.17. Both Sergile and Slaton were 1:59 this morning. In total, 5 swimmers broke 2:00 in the event today.

After not swimming a best time in the LCM 100 back in several years, Nebraska’s Autumn Haebig swam 2 today. Haebig led prelims, then doubled down on the performance, touching in 1:01.23 to leave no doubt she will be advancing to Wave II. Arkansas’ Kobie Melton held off Michigan’s Casey Chung, picking up her Wave II ticket as well.

In the 2nd brutally tight finish of the meet, Indiana’s Jacob Steele and Spartan Aquatics’ Nathaniel Stoffle made it through to compete next week. The pair both swam best times to maintain their respective 1-2 positions from prelims. Steele and Stoffle made took control of the rave early, separating themselves from the heat on the first 50. The name of the game on the 2nd 50 was to hold their lead.

Fastest heat to swim with finals

An excellent race developed through the middle of the pool with Hayden Miller, Abigail McCulloh, and Elle Braun. They were locked in a stroke-for-stroke race through around the 650 mark, then Miller pulled away in a hurry. The 16-year-old came home in a blistering 31.39, getting herself to the wall in under 8:40 for the first time in her career. She dropped nearly 5 seconds with the performance, and blew away the Wave II standard.

McCulloh also got home in a speedy fashion, splitting 31.87 on the final 50, helping to propel her to a new best time as well.

Fastest heat to swim with finals

It was the pair of Navy boys who got the job done, and advanced to Wave II next week. Garrett McGovern and Luke Johnson were largely in a race with each other through the 800 meters, with Joshua Brown hanging a little behind them. Neither McGovern or Johnson swam a best time, but they ultimately got the job done, advancing to the next phase of the meet. They’ll both be in the 1500 Monday as well.

Congratulations to all the swimmers! It’s great to see our sport bounce back after the last 14 months in this new and innovative way. These times are fast too! The first OTs I followed was 84 and many of these times are as fast or faster than the top 2 back then. I wonder how many of us swim fans are going to want the Wave I/Wave II breakdown to continue past this year.

Said in his interview he wasn’t expecting that. So exciting for him to get another swim next week.

“Garrett McGovern and Luke Johnson were largely in a race with each other through the 800 meters, with Joshua Brown hanging a little behind them.”

Joshua Brown swam in the AM

Surprised they didn’t cut off the men’s 800 free. those guys will probably swim the 1500 free too so they will be tired by the time wave 2 comes around

If they’re allowed to swim all of their events again at Wave 2, I’d seriously consider skipping Wave 1 1500s for both of them.

One of the articles said that if u get a transfer spot u can enter all your events. So the top 2 in every event today can scratch Wave I and swim all their events in Wave II now.

Got goosebumps during those Navy interviews! This is what it’s all about!

Agreed. I bet that will be the highlight of the meet for me.

Sure. They should have a swim off 😝

So should we assume that the men’s 800 free final gets cut off… again?