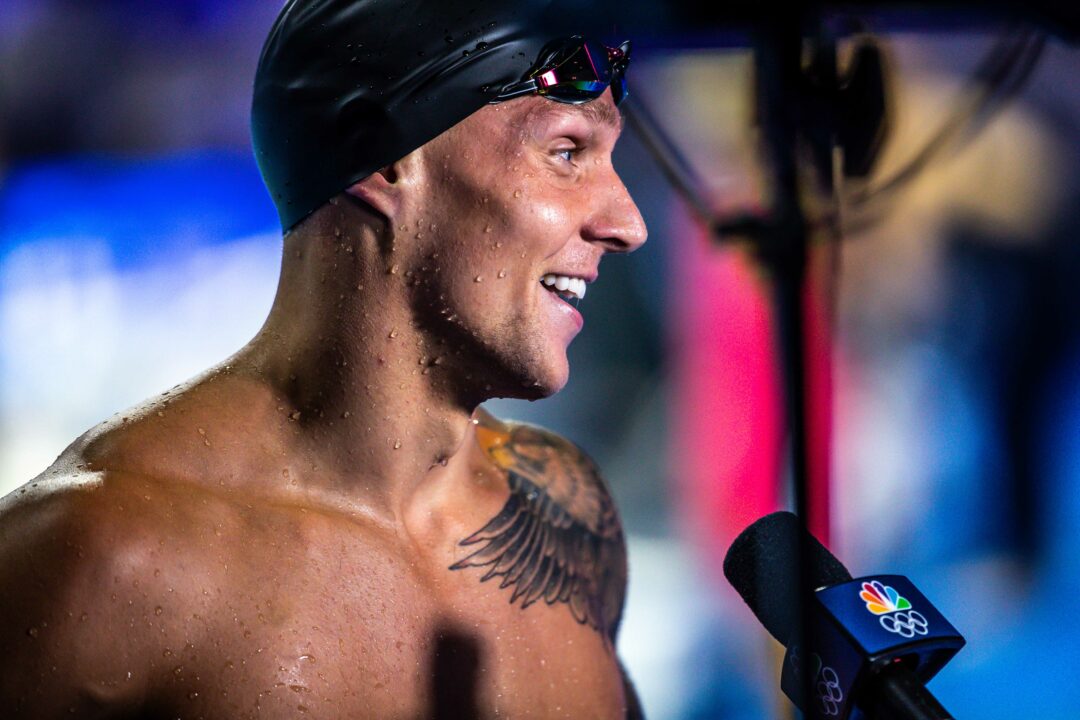 On day four, Caeleb Dressel will swim his second event of the meet: the 100 free. He's the top seed with a time of 46.96, .43 ahead of 2nd seed Ryan Held. Current photo via Jack Spitser/Spitser Photography

Day four prelims of the 2021 U.S. Olympic Trials Wave II will see Caeleb Dressel ‘s second swim of the meet: the men’s 100 free. So far he posted a lifetime best 200 free during prelims on Monday, but he scratched the semifinals.

He’s the top seed with a time of 46.96, .43 ahead of 2nd seed Ryan Held. Maxime Rooney rounds out the top three seeds. Three-time Olympian Nathan Adrian is ranked 7th and this will be his first race of the meet.

In the women’s 200 fly,  Hali Flickinger, Regan Smith, Katie Drabot lead the field. Flickinger has been on fire so far, as she snagged 2nd in the 400 IM final on Sunday. Smith has been on a roll too, after taking victory in the women’s 100 back final last night.

The men’s 200 breast will feature top seed Will Licon. Olympic veteran Cody Miller is ranked 6th and will compete in heat five alongside 3rd seed Nic Fink. Miller finished 11th in the 100 breast semifinals, missing the final. Andrew Wilson and Fink took 2nd and 3rd to Michael Andrew in that final. Licon took 6th place, but the 200 is more of his strong suit.

It’s distance day for the men this morning. Bobby Finke, Jordan Wilimovsky, Zane Grothe top the psych sheets in the men’s 800 free. But time trial superstar Jake Mitchell, fresh off his 3:45.86 400 free last night. He destroyed his 400 free finals time (3:48.17). He took out the first 200 meters half a second off the individual 200 free time he posted in the semifinal. If he rides that momentum we might see another big lifetime best here.

You have booked your ticket to Tokyo, now have fun.

it’s been day after day of surprises in the prelims and triumphant [and heart break] in the finals! If this is what we waited ad additional year for, well, it is worth the wait — and we aren’t even half way finished. Kieran Smith, Lily King, Michael Andrew, Regan Smith — wow! what a lineup to send to Tokyo. And everyone seemingly comfortable with Covid protocols. Why do I see visions of many medals dancing in my head for Team USA in late July? Hooray!

Great team, but geez, over there in Adelaide, they’re crushing it. Four 52’s in the women’s 100 free today. Might be a bit more parity in the results this time around than I’d like.

Man, I’m not liking the prospect of saying goodbye to Nathan Adrian. Hope he makes it through. This changing of the guard thing is rough.

Dahlia crying was tough, Smoliga and Baker, Grevers. Swimming can be unforgiving.

On the brink of elimination from the 2016 U.S. Olympic Team:

He’ll definitely be Celeb Dressel after cleaning up the medal count in July.

I’m guessing we’ll see a casual 47.8 from Dressel in the prelims.

Now that MA is on the team, how does he deal with the US Olympic training program vs what he is accustomed to his format of training?

Same as always (he’s been on the travel team since 2018). It’s not like they all just get together and do one practice.

If only things worked that way. Well, who knows. Regardless, I’m excited. What time in the prelims will give you an indication he’s on his A-Game (as in sub-47 this week)?

His previous 200 PB was unrested.