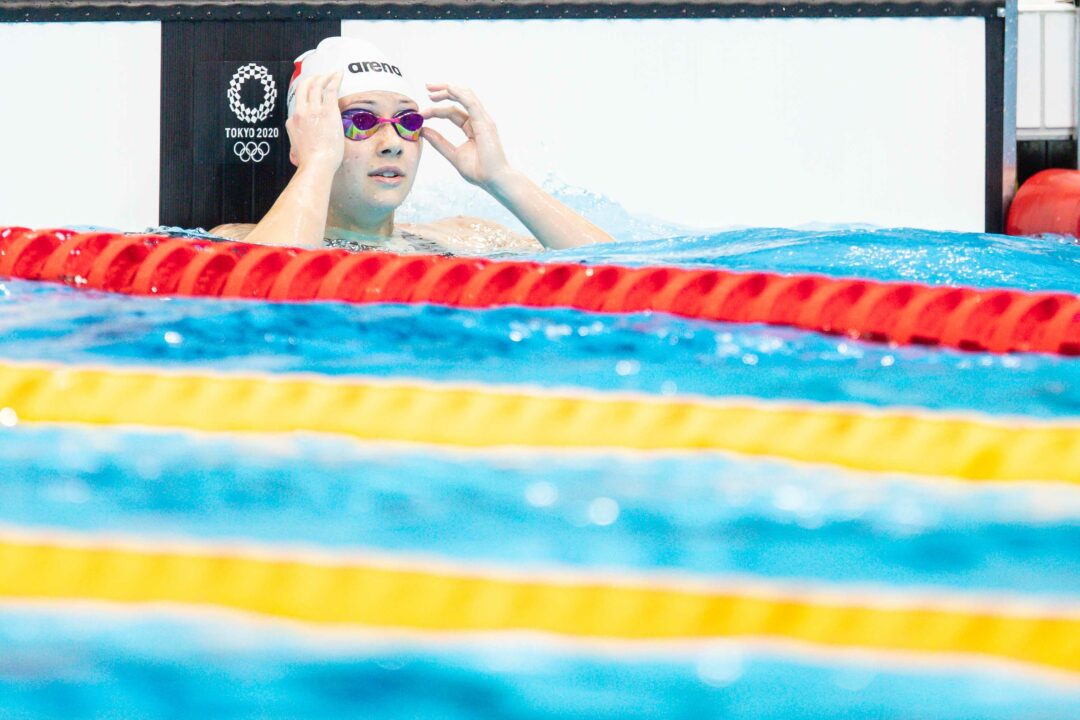 Siobhan Haughey has been on a tear in 2021, and enters this week as the top seed in the women's 100 and 200 free. Stock photo via Jack Spitser/Spitser Photography

Sjostrom will have her hands full with Netherlands’ Ranomi Kromowidjojo, the World Record holder (22.93). Kromowidjojo set that World Record back in 2017, and hasn’t been quite as fast since. Even so, Kromo has been 23.46 this fall, and could very realistically get down towards 23.0 this week.

Poland’s Katarzyna Wasick is the #2 seed here with her personal best of 23.30, which she swam last November. Her fastest time of 2021 is 23.37, which she posted about 2 weeks ago. In Tokyo, Wasick tied for 5th with China’s Qingfeng Wu, who will be racing in Abu Dhabi as well.

Abbey Weitzeil (USA) is also in the mix here, after taking 8th in the 50 free at the Tokyo Olympics. Weitzeil, who is a star in yards racing, is seeded 4th at 23.44, which is her personal best time. Weitzeil is the fastest yards 50 freestyler of all-time (20.90), so she’s certainly someone to keep an eye out for this week.

This could shape up to be one of the most exciting races of the meet, despite some sprint stars like Pernille Blume, Emma McKeon, and World Record holder Cate Campbell not being in the mix. Even so, we’ll get to see the hottest women’s sprint freestyler currently, Siobhan Haughey, go up against the LCM World Record holder, Sarah Sjostrom.

Of course, you can never count out Sjostrom in any race. Heck, she’s been consistently among the world’s best for a dozen years now. That being said, Sjostrom’s got her work cut out for her going against Haughey. The 24-year-old out of Hong Kong has been lighting up the swimming world all year, resulting in a pair of Asian Records and Silver medals at the Tokyo Olympics.

She hasn’t slowed down either, picking up more Asian Records during the SCM ISL season this fall. Haughey is the 2nd-fastest swimmer in the world this year, coming in at 50.79, but the leader, Australia’s Emma McKeon isn’t competing in Abu Dhabi. Given how frequently Haughey has been dropping time this year, it’s hard to bet against her here.

Another swimmer to keep an eye out for is USA’s Abbey Weitzeil, who enters the meet with a 2021 best of 51.62. Weitzeil is one of the greatest SCY (yards) sprinters of all-time, and she definitely can’t be overlooked. She’s been as fast as 51.42, a time which she swam last November. Weitzeil took 8th in the 100 free at the Tokyo 2020 Olympics over the summer.

Great Britain’s Freya Anderson is another swimmer vying for a medal this week. She sits just 0.01 seconds behind Weitzeil on the psych sheet. Anderson hasn’t been quite as fast this fall, however, topping out at 52.21.

Poland’s Katarzyna Wasick and France’s Marie Wattel are also seeded with 51.4s, and could very easily find their way onto the podium. Czezh Republic’s Barbora Seemanova is seeded 7th, but a good swim could boost her into the top 3. Seemanova is primarily a 200 freestyler.

Haughey enters the meet as the favorite in the 200 free. She has the fastest time in the world this year (1:50.65), which she swam just 3 weeks ago. The late November performance was just 0.22 seconds off Sarah Sjostrom‘s World Record (1:50.43). Haughey also has a good shot at the World Champs Record, which stands at 1:50.78.

In terms of 2021 performances, Haughey is leaps and bounds ahead of the rest of this field. She’s been over 2 seconds faster than the next-fastest performer this year, Netherlands’ Marrit Steenbergen (1:52.75). Great Britain’s Freya Anderson is seeded with a 1:51.87, a time which she swam in November of 2020. This year, Anderson has only been as fast as 1:53.00.

Haughey and Seemanova are the only Tokyo finalists in this field, but there are several more semifinalists. Anderson is one such swimmer, as she advanced to the semifinals over the summer, but finished 12th. Another is Canadian 15-year-old Summer McIntosh, who, at the young age of just 14 over the summer, placed 9th in semifinals of the 200 free, missing the final by tenths of a second. McIntosh is seeded at 1:55.74, which coincidentally ties her personal best LCM. That means we could definitely see the 15-year-old drop some time this week.

Germany’s Isabel Gose took 11th in semifinals in Tokyo, and is live to make it to finals this week. France’s Charlotte Bonnet and Germany’s Annika Bruhn were also Tokyo semifinalists, and are competing this week.

Canadian Rebecca Smith could make some noise here as well. Smith has been 1:52.92 before, giving her a fighting chance at the final, maybe more. USA’s Paige Madden is another to watch out for. Madden has only been 1:54.9 this year, but she has an LCM personal best of 1:56.44 from this past summer.

In the announcement of the USA Swimming roster for this meet Torri Huske is listed as entered in the “100/200 FR; 50/100 FLY.” Paige Madden is the only USA entrant in either the 200 Free Psych Sheets or the Heat Sheets, which have been issued for day one.

Why no Torri Huske in 200 Free? Was this discussed somewhere, and I just missed it? Not that it would be expected to be that good of an event for her in this field, but it is listed for her.

She doesn’t have the “A” cut from a World Championship qualifying event.

To enter two athletes from the same country, both must have the “A” cut at a World Championship qualifying event.

Rebecca Smith will be top 3 at least she was 1:53.0 at a Canadian college meet this year. Wouldn’t be shocked to see her go 1:51

Haughey is on another level right now

20
-6
Reply
Sun Yang is a legend
Reply to  Swimmerfromjapananduk

Everyone’s gangsta until they are against Ariarne Titmus and Ledecky.

Winning against a weak field means nothing.

5
-31
Reply
Swimmerfromjapananduk
Reply to  Sun Yang is a legend

I agree with your name but not your statement. Haughey will slap them up in the 200. I like both of them but their rivalry has no place in Haughey’s territory

It’s way too early but I’m betting on Haughey beating both of them next year in long course.

Titmus on top everyday all day.

Titmus is the dinosaur but haughey is the meteor

Not on top at Queensland State Championships.

Siobhan beated Ledecky for more than 1 second (1 body lane) and she was only 0.42 second behind.
Titmus.