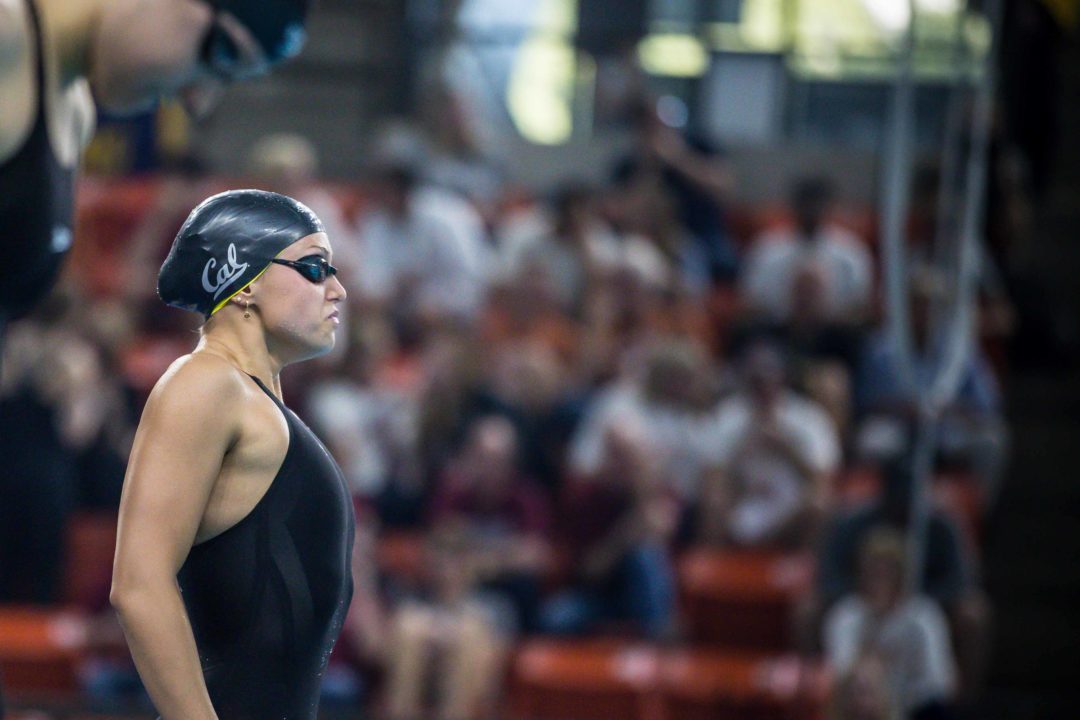 The 2021 NCAA Women's Championships are off in less than an hour, with the only event of the night the 800 free relay timed finals. Current photo via Jack Spitser/Spitser Photography

The 2021 NCAA Women’s Championships are off in less than an hour, with the only event of the night the 800 free relay timed finals. This year’s new no-prelims-relays rule won’t have any effect on the 800 relay, which is always run in timed finals.

This race looks like a showdown between Cal and Virginia, and whether or not Isabel Ivey swims this relay for Cal could be the difference between first and second. Ivey, one of the top freestylers in the nation, swam all four of the other relays at Pac-12s.

Meanwhile, Texas, NC State, Kentucky, Stanford and Florida are all poised for top finishes; they’re all seeded with 6:58s. Texas has Kelly Pash and Kentucky Riley Gaines, the two of them tied for the #2 seed in the individual 200 free at 1:42.70 behind Virginia’s Paige Madden (1:42.39).

Georgia is also seeded under seven minutes with a 6:59, as no other teams have been under 7:01 this season. Their big leg is Courtney Harnish, who is seeded fourth in the individual 200 free with a 1:42.96.

There were no more than four teams in each heat to adhere to social distancing guidelines tonight, as will be the case in relays to come.

The final heat went to Virginia, helped by Isabel Ivey being kept off of this relay, as they were challenged by Cal and Texas. Texas led after the first leg, as sophomore Kelly Pash hit a 1:43.07 for the lead-off. Paige Madden went second for the ‘Hoo’s, pulling them into a big lead. Ella Nelson extended that lead on the third leg for UVA, with Alex Walsh bringing it home for them. Virginia clocked a 6:52.56, getting a 1:41.63 leg from Madden, 1:43-lows from Nelson and Walsh and a 1:44.6 lead-off from Valls. Cal and Texas were second and third in the heat, but Kentucky’s time from an earlier heat held up for second overall, a great performance from the SEC Champions.

Virginia’s time was the fastest of the night by over three full seconds, a commanding victory, as they were one of just three teams to have four splits break 1:45.

NC State, swimming in the final heat, gained six seconds after taking Katharine Berkoff and Kylee Alons off of the relay. They place 17th, the only team to not score tonight, after they were seeded fourth overall.

In the penultimate heat, Stanford, Georgia, Florida and Kentucky squared off. Florida’s Talia Bates got the Gators off to a good start with a 1:43.70 lead-off, but Riley Gaines pulled Kentucky in a huge lead on the second leg. Kentucky won this easily, going 6:57.02 and dropping from seed. That was a lights-out swim for the Wildcats, who had three swimmers go faster than they did at SECs, and they surge to a silver medal finish tonight among all heats. Georgia also broke seven minutes at 6:59.82, while Stanford was just third in 7:01.05 after they broke 6:50 in 2019.

Morgan Scott led off Alabama in heat three, churning out a 1:44.15 to give them a lead, with Cora Dupre splitting a 1:43-high to follow, giving them a big lead over Michigan, who themselves had a large lead on Tennessee. Though their lead shrunk over the back-half, the Crimson Tide still dropped from seed to go 7:00.38 and overtake the top position with just two heats left. Michigan also put up a strong swim, going 7:01.81 to move to the #3 position and drop from seed. The final two heats have four relays, each.

Heat one was a race between Ohio State, Louisville and Wisconsin, and only one team in this field won’t score as there are only 17 teams racing this relay. So long as a team finished first or second in this first heat, they’d secure at least two points. OSU took the win in 7:00.79, dropping three seconds from seed, while Wisconsin and Louisville also dropped about two seconds from seed.

I believe Spitz is the first Cal swimmer to make the A final of the 500 free since Cierra Runge in 2015.

I literally cannot believe there are this many comments from ONE EVENT. Yay swimming.

Even though they added time from SECs, that’s Florida’s best relay finish at NCs since 2015. Poppell/Hite have everything moving in the right direction.

Question-did I read somewhere that relay swimmers weren’t allowed to the meet?

Sobering thought— this blowout UVA victory would have been 4th in 2019!

And their 200 medley relay from ACCs this year would have been first, and an American record in 2019. So what’s your point? UVA’s 800 free relay is arguably their least stacked relay among all five of their relays this year anyway…and they just won by 4.5 seconds.

Not knocking UVA at all. Just commenting on how different the field is with redshirts and graduations and a pandemic.

Yes, lots of talent graduated/missing after 2019 NCAAs, especially in the 200 free.

Yes. Historically speaking Madden’s split was not that fast, even though she dominated tonight.

enjoy the races, save histronics after the meet, sport is not linear rise, it needs supersuits or doping to make every year fast, sometimes results are worse than years before

This meet is over. UVA runs away with it.

The meet was over a long time ago. Uva has always been huge favorites. They have no weak spots.

They have 1 weak spot, and it’s a spot that Texas does not have: diving.

Jocelyn Porter might pick up a few point, but in general, Texas will make up a ton of ground there.

That’s really the only chance anyone has after that relay. Probably still won’t be enough. But could put it within “DQ” territory on the final day.

I guess you’re right. I don’t know anything about diving lol

You need to gator on down over to the DiveDove website, Samuel.

Bummer they couldn’t have raced to a title last year!

Especially since last year could have been a really competitive meet between Stanford, Cal, and UVA which would have been really exciting