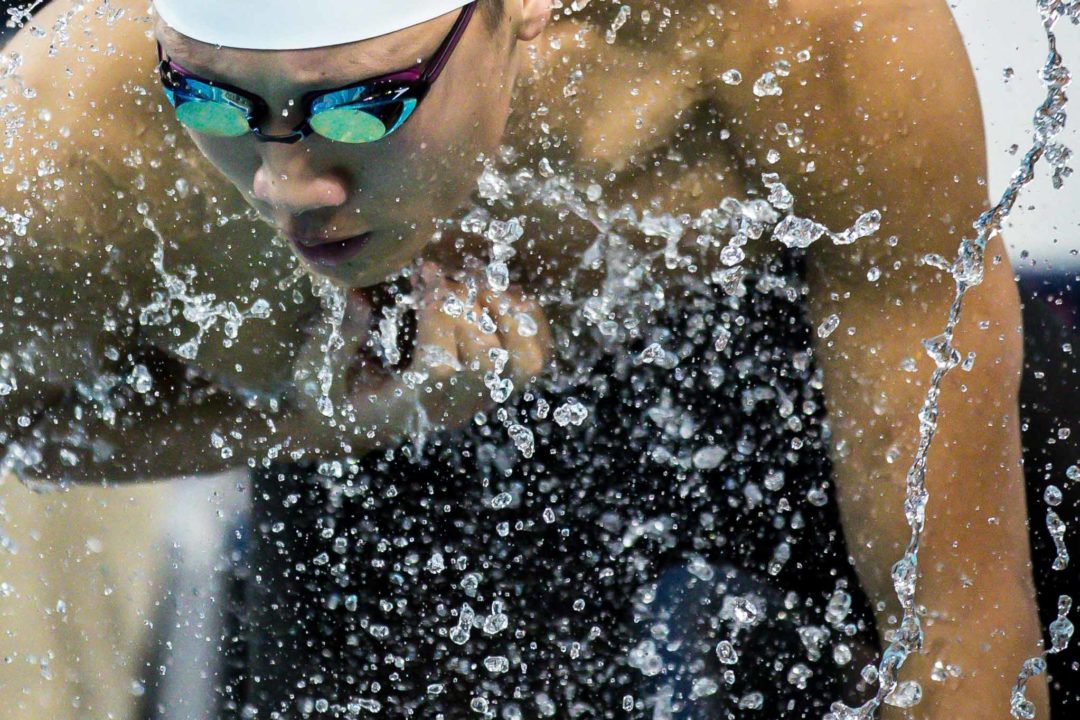 Stanford junior Alex Liang led a trio of Cardinal swimmers into the 'A' final of the 200 IM on Day 2 of the Men's Pac-12 Championships. Archive photo via Jack Spitser/Spitser Photography

Both Cal and Stanford had a very strong preliminary session on Monday, advancing nine and eight swimmers through to ‘A’ finals and 16 and 14 into scoring position for tonight, respectively.

The Bears put four and the Cardinal put three men into the 500 free championship heat, while Stanford also put three up in the 200 IM and Cal advanced three through in the 50 free.

In the 200 IM, the Cardinal trio who made the ‘A’ final (Alex Liang, Jonny Affeld and Shane Blinkman) all hit personal best times, which left two of Cal’s ‘A’ finalists from last season (Bryce Mefford and Reece Whitley) on the outside looking in.

Arizona appears to be asserting itself as the frontrunner for a top-three finish early on over USC, putting five swimmers into ‘A’ finals (to USC’s one) after beating the Trojans on both relays last night.

The Wildcats have a legitimate title challenger in the 500 free with top qualifier Brooks Fail, and they’ve got three men in the ‘A’ final of the 200 IM.

If seeds from prelims scored as they were in the morning, this is how day 2 individual scoring would work out (not including the 200 free relay, which Cal will likely win):

Cal, who are heavily expected to win the meet, will begin digging out of their diving hole on Monday evening, though the Cardinal should retain the lead, for now. The meet will begin to stratify on Tuesday, with the only likely placement question at that point (barring something unusual) being wheter Utah’s diving points are enough to hold off USC for 4th place.

Does Cal have four in the 500 A-final?: Julian, Yeadon, Grieshop, and C Mefford…

Was just about to comment on this.. unless one of them scratched and the rest of us do not know, then Cal has four “ups” in the 500, not 3.

C final a 500 free for fun..hahaha. “Coach my stomach hurts”

Its closer than I though it would be. Stanford should still be leading after tonight.

How many swimmers can actually score though in one event from one team? I think Cal has a lot of swimmers coming into the final in the 500 free, but can only 4 of them score?