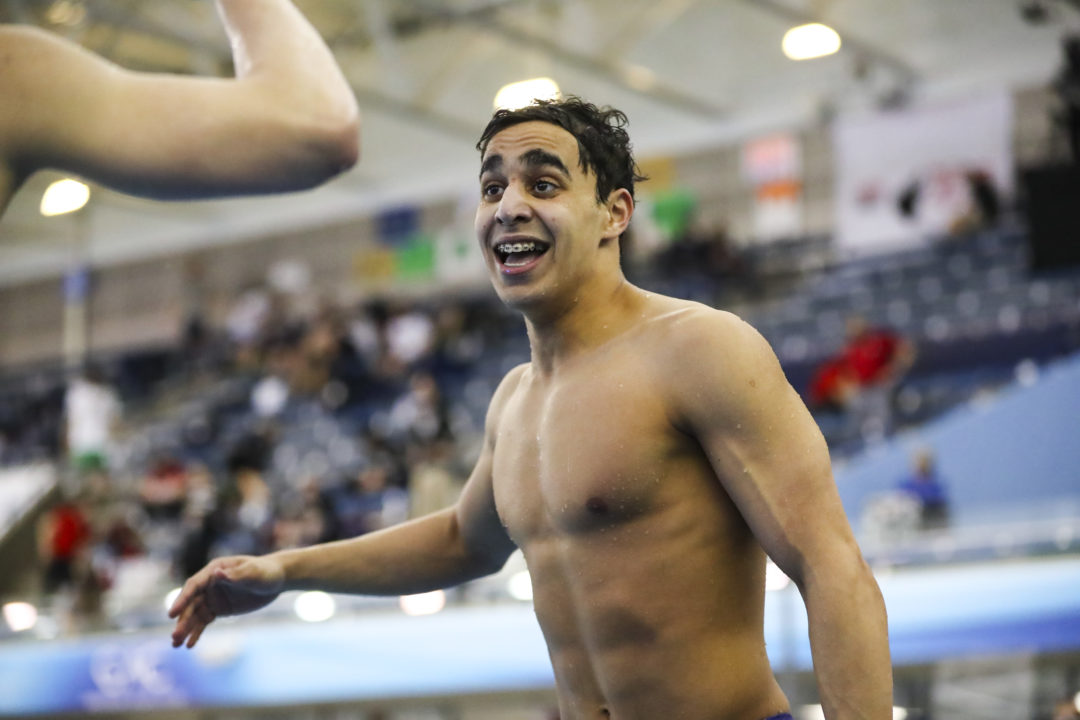 18-year-old Youssef Ramadan of Virginia became the 5th-fastest 100 fly performer in history at the 2021 ACCs, improving from 47.85 to 44.32 in four months. Stock photo via Jaylynn Nash, the ACC

It will take speed to win the 2021 NCAA title in the men’s 100 fly, with the entire top seven seeds all coming in under 45 seconds. At the top of the list is Virginia Tech freshman Youssef Ramadan, coming in his with ACC title-winning time of 44.32, which ties him as the 5th-fastest event performer and unofficial fastest 18&U performer in history. The 18-year-old Egyptian’s first 100-yard fly time in the USA Swimming database came from the VT Intrasquad in October 2020, managing a time of 47.85. Then at 2020 UNC Janis Hape Dowd Invite in December, Ramadan improved 1.42s to a 46.43. Fast forward to the 2021 VT Invite in early February, Ramadan slimmed again to another barrier-breaking 45.68. Ramadan only went up from there, winning the 2021 ACC title in a 44.32.

Since October, Ramadan has dropped a total of 3.53 seconds, going from a 47-high to a 44-low. During his ACC winning race, Ramadan took the race out in a lighting fast 20.11, which is a half second faster than any other swimmer’s opening 50 in the psych sheet top eight. However, Ramadan closed the race in a 24.21, a full four seconds slower than his opening 50. During ACC prelims, Ramadan split his then-lifetime best of 44.53 in 20.74/23.79, just three seconds apart from each other. If Ramadan maintains his 20.1 opening 50, he could be on the road to breaking yet another barrier: 44 seconds. All three swimmers who have been under 44 seconds in history, Caeleb Dressel (42.80), Joseph Schooling (43.75), and Tom Shields (43.84), opened in a sub-21 yet were able to close under at least 23.3. It is questionable whether or not Ramadan can repeat or better his 44.3 at NCAAs, after all he is a freshman. Yet the young Egyptian will certainly impress in Greensboro.

Behind him is sub-1:40 200 flyer Nicolas Albiero of Louisville, coming in with his ACC runner-up time of 44.67. Unlike Ramadan, Albiero utilizes his back-half closing speed and strong underwaters to catch early race leaders. Albiero split his ACC finals race in 20.76/23.91, which is still a tenth slower than Ramadan’s ACC prelims swim, where he closed that swim in a 23.79 after taking it out 20-point. Another swimmer whose opening 50 simply may not keep up with the leaders is Georgia’s Camden Murphy, who is capable of closing in a 23-high yet has an opening 50 of 20.9.

Despite this, Murphy won the 2021 SEC title in a 44.81, just off his morning pool record of 44.77. Taking second to Murphy at SECs was Mizzou’s Danny Kovac (44.84), whose third 25 was 0.36s slower than Murphy’s. Both Murphy and Kovac performed no-breath closing 25s, which allowed them to touch out backstroker Shaine Casas (Texas A&M) in the final. Placing fourth at the SEC meet was Georgia freshman Luca Urlando, who hit 44.97 in prelims before going 45.15 behind Casas (44.91). Both of Urlando’s opening 50s were smooth 21.0s, yet he was able to close 23.9/24.0 with his natural stroke. Urlando’s swim is seeded 7th on the psych sheets, however, is more favored to place top three in the 200 fly final.

It’s also important to note that Albiero (#13), Murphy (#16), and Kovac (#20) all moved up on the all-time performers list in the 100-yard fly this season. Tied for 25th on the list are Indiana’s Tomer Frankel of Israel and Texas’ Alvin Jiang at 44.91, which also ties for 5th on the psych sheets. When closing his title-winning 100 fly at Big Tens, Frankel split a quick 11.71 on the last 25, which is one of the fastest finishing 25s of this field. On a similar note, Jiang has the strongest 3rd 25, arguably the most crucial point of any 100 race, of the 2021 NCAA field. When Jiang won Big 12s, his 2nd 25 split was 11.65, yet swam faster on the next 25 at 11.50. However, both Frankel and Jiang opened in 21-lows, which could be the difference between placing top four or settling fifth through eight.

Two-tenths of a second separate the 7th seed (Urlando) and the 8th seed, Virginia Tech’s Antani Ivanov, who placed 3rd at ACCs with a 45.21. Seeded in 9th after winning Pac-12s is Cal’s Ryan Hoffer, with an un-shaved yet somewhat rested time of 45.22, splitting 9.35/11.43/11.76/12.68. Simply shaving three-tenths off the closing 25 would put Hoffer at 44.92, which would rank 7th on the psych sheets. Hoffer’s lifetime best sits at 44.85 from the 2020 Pac-12s, another un-shaved yet rested time, which would put him at 5th on the psych sheets. This upcoming meet will be Hoffer’s first rested and shaved meet since the 2019 NCAA Championships, where he placed 7th in the final at 45.15 as a sophomore, 0.11s behind 5th-place finisher Camden Murphy (45.03). While Hoffer is a dominant freestyler, his lethal underwaters and racing experience will favor him as a top-3 contender.

Dark Horse Threat: River Wright (SO), Michigan (45.24, 10th seed) — At the 2021 Big Ten Championships, Indiana and Michigan had a tight battle for the team title. Sophomore River Wright had a lot of pressure heading into the 100 fly final, where he had the potential to win the event for the Wolverines and propel them in the team race. Off the start, Wright accidentally went past 15 meters underwater, immediately disqualifying him from the race. Wright had split 9.46 off of the first 25, which could be translated to a legal 9.5-9.6 if he broke the surface at 15 meters. After that, Wright split 11.43/11.80/12.37, where Frankel’s closing 11.71 caught the sophomore for the title. Wright’s unofficial time was 45.06, which would rank 8th on the psych sheets. If Wright can perfect his opening 25 and take a tenth off his closing 25, he could avenge his Big Ten DQ and make the NCAA championship final.

The disrespect on Ramadan is so sad in this article

No way jiang falls to 8th…

I’m a believer of Freshman not dropping as much at NCAAs than at conferences but god I was Youssef to win so badly, just to see someone who started off as a 47 in the beginning of the season to be an NCAA champion and beating people who were 44s, 45s or even 46s. Its alot to ask for but it would be huge.

It’s not like he really started the season at 47, he never swam yards before so the 47 in season is pretty decent

How pathetic has Auburn Swimming become? Taylor was the worst decision.

He was hella fast at ACCs.

But when have you ever seen a freshman drop that much at conference and then go anywhere near the same time at NCAAs?

I think his ACC time probably winds up as the #3 time in the country season-long, but I think he’ll got 44.9 or 45.0 and squeak into the A final.

I think Caeleb had his braces during 43.5, so let’s see Ramadan hits his 43 next year. If he wants a 42, he’s gonna have to lose the braces by next year. Ramadan, Jiang, Albiero are my top 3, no particular order

My bad, I typed this just before my nap, but I’m guessing my original intent was understood. I meant we’ll see Ramadan hit his 43 this year and to get the 42 next year, he’ll need to lose the braces, haha.

Hopefully he can avoid what happened to Hugo Gonzalez coming off a dynamite SECs as a freshman under the same coach. Think the challenges of the pandemic and missed training times means less of a base to hold on to, but he’s not trying to swim a 4IM.

Swim swam also in title puts Ramadan from Virginia. . . NOT