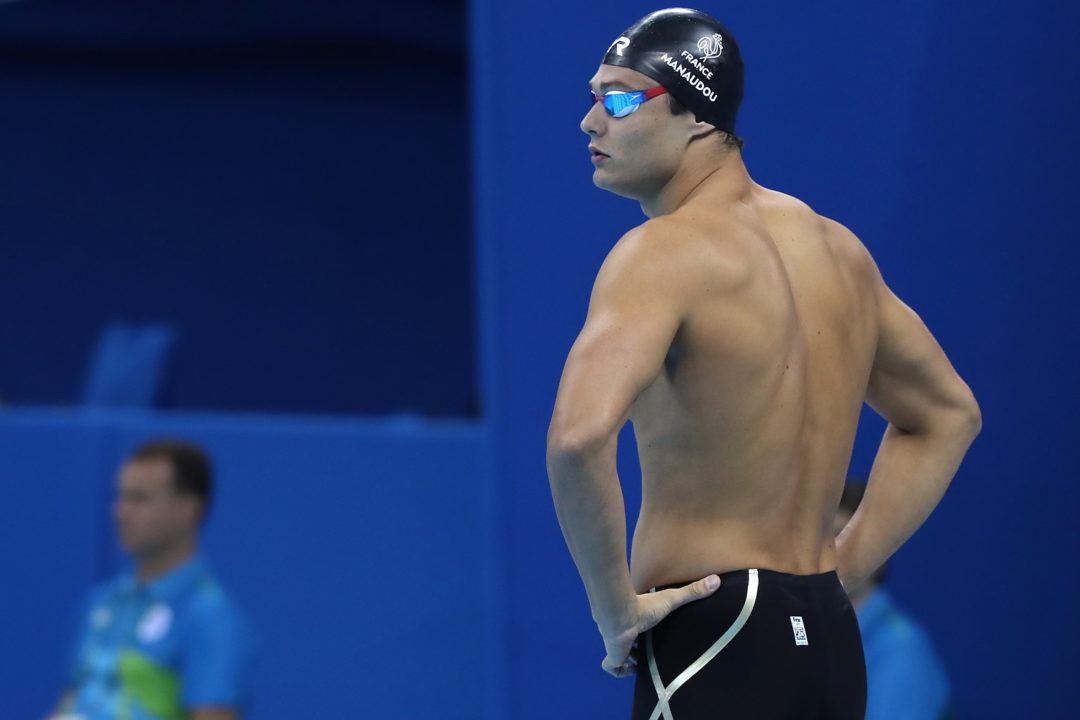 We are back and we are live for the 4th day of racing at the 2021 French Elite Swimming Championships in Chartres France. Archive photo via Simone Castrovillari

We are carrying on with racing at the 2021 French Elite Swimming Championships in Chartres France. As of the end of day 3, the French Olympic roster sits at 14 with 13 individual event swimmers and 1 relay-only competitor.

Today we will get out first look at Olympic gold medalist Florent Manaudou who will race the 100 freestyle with a shot at adding that event to his Olympic program. He is currently qualified to race the men’s 50 freestyle. Manaudou will be joined by a solid lineup of men including Maxime Grousset, Clément Mignon, Mehdy Metella, and many more.

Lara Grangeon has missed out on qualifying for the Olympics in both the 1500 freestyle and 400 IM thus far but will be back again to race the women’s 200 butterfly. She’s the top seed there with a 2:09.50 which is a bit more than a second over the 2:08.43 it will take to qualify.

Grangeon will also be contesting the women’s 800 freestyle alongside Russian Olympian Anna Egorova and fellow open water swimmer Oceane Cassignol. There, the time to beat in the 800 will be an 8:42.17 in prelims and 8:26.43 in final.

Adding to the action, Antoine Viquerat and Antoine Marc will be among those racing the 200 breaststroke and are entered with a 2:11.44 and the 2:11.95, respectively.

Yohann Ndoye Brouard and Mewen Tomac battled it out earlier this week during the men’s 100 backstroke with Tomac ultimately taking the title. Here, Jeremy Stravius and Stanislas Huille joined the duo with prelim swims of 25.34 and 25.46, respectively, while Brouard swam a 25.36 swim and Tomac a 25.47.

They will need decent PBs in the final should they wish to crack the decade-long French record of 24.07 held by Camille Lacourt.

The 2 will go up against each other again in the final and will feature more competition than they did in the 100 in the form of the 3 other sub-26 swimmers during the morning, among others.

Analia Pigree came out flying in the prelims of the 50 backstroke and delivered a new French record of 27.81, getting under Beryl Gastsaldello‘s 2018 mark of 27.86. That swim for Pigree was nearly half a second faster than her former PB in the event which was a 28.30, set only a few months ago in February 2021.

Finishing second in the prelims, Mary-Ambre Moluh also shaved half of a second off her previous best. Heading into the race with a 28.37 from March 2021, Moluh notched a 27.87 morning swim which was only 0.01 seconds slower than Gastaldello’s former record.

Clément Bidard was next as the third fastest man of the morning, posting a 2:14.27. That was 0.01 seconds slower than the 2:14.26 he needed to get under the prelims Olympic-qualifying standard this morning. That made Viquerat the only French man to clear the cut.

Bidard has been under the prelims qualification time this season with a 2:13.80 PB from December 2020.

Algeria’s Jaouad Syoud followed in the rankings with another sub-2:15 swim of 2:14.92. Syoud’s quickest time on record prior to that swim was a 2:21.42 from April 2019 meaning that his swim was a substantial PB.

No women managed to get under the required prelims time of 2:12.71 in order to give them a shot at automatically qualifying for Tokyo.

Lara Grangeon followed by added a couple of seconds to the 2:09.50 she went in with, ending up with a 2:13.21 for second seed into the final.

Just as Grangeon did by going from top seed to 2nd, Lilou Ressencourt fell one place from 2nd seed to 3rd in the prelims with her 2:14.82, trailing her entry time of 2:11.88.

The three will be back tonight to try to get closer to that 2:08.43 finals cuts but will need some significant improvements from their morning swims in order to do so.

The 15 fastest men in the 10 freestyle prelims swam under the required prelims standard of 50.03. The field also including 4 swims under 49 and 1 swim under 48.

The sole 47 swimmer in the field was Maxime Grousset who took first overall with a 47.99, getting within 0.09 seconds of his 47.90 entry time. If Grousset can replicate that time tonight and fend off the tight field behind him, he should be expecting to get on the plane to Tokyo in a few weeks.

50 freestyle Olympic champion Florent Manaudou won’t be letting Grousset take the title easily, however, coming in with a 48.58 for second place. It’s still a little bit over his 48.20 entry time but Manaudou only really has to worry about the 100 at this meet since he’s already qualified for the 50 and will therefore be going full force tonight.

Mehdy Metella was next with another sub-49 swim, notching a 48.78 for 3rd seed overall while Charles Rihoux managed a 48.93. Metella’s time was a bit slower than his 48.27 entry but Rihoux showed improvement, getting down from the 49.04 he went in with.

Russia’s Anna Egorova took first place in the women’s 800 freestyle prelims with an 8:41.51 morning swim, getting in ahead of France’s Adeline Furst who swam an 8:44.89.

Egorova has been quite a bit faster than what she swam here a number of times this season including when she hit an 8:24.35 PB in April and then swam an 8:27.51 in March and an 8:26.56 in April at the 2021 European Swimming Championships. Egorova will 400 and 800 freestyles this summer in Tokyo so this meet is likely serving as one of her final tuneups heading into the Games.

Maud Rodriguez also managed to climb up the rankings here, going from a 14th place seed with her 8:53.99 to a 3rd in the prelims with an 8:47.79. Furst and Rodiguez will lead the way into the final but were both a bit off the required prelims time of 8:42.17 that would help them earn consideration for Tokyo if they managed to get under the even faster 8:26.43 in the final.

I saw it here: https://www.lequipe.fr/Natation/Actualites/Leon-marchand-cyrielle-duhamel-et-fantine-lesaffre-qualifies-pour-les-jeux-olympiques-de-tokyo/1262783

Grousset 47.99 in the 100 free. Close to his PB of 47.90
Manaudou 48.58 Not too bad for a handball player
Metella will try to qualify after his shoulder surgery of last year.

nice swim from Grousset, and a 4×100 m free looking good!

So.. 5 teams for a 3rd place spot.. Italy GBR Australia Brazil France.. and a little behind Hungary

France isn’t on the same level as GB for example. GB is better at every position. Would be a small miracle for France to seriously challenge for a medal. I think they won’t finish higher than 7th or 8th (Hungary might be favored over them).

Hope they’re not expecting Jacco to perform a miracle ready for Paris.

Jacco will have very little to do with the French performances.
He isn’t in the water in swimmers’ place.

And I’m less and less pessimistic about Paris 2024.
At least we will not look terrible.
Grousset in the men’s 100 free
Men’s 4X100 free relay medal contender
The men’s 4X100 medley relay will be much better than it is right now.
Ndoye-Brouard, Tomac and Mathieu in men’s backstroke
Marchand future star in the 200 fly, 200 IM and 400 IM. Unless Bowman ruins his career! 😆
Nowaczyc a great prospect in women’s sprint freestyle
Moluh great young talent in the women’s 100 back
Aubry from the 400 free to the 1500 free
Wattel, Gastaldello and Bonnet probably still in action
And of course Manaudou and Amaury “hamburger” Leveaux… Read more »

I’m not dreaming. Between 2 and 4 gold medals doesn’t seem so crazy.

Of course that total mostly depends on Marchand and his work with Bowman.

Seeing how Bowman pretty much destroyed Yannick Agnel’s magnificient freestyle stroke by overworking him (in a trying period of his life with Camille Muffat’s death and his growing doubts about wasting his youth in the pool and not living his life), I’m a bit concerned for Léon Marchand.
In France I feel like there is a very diverse landscape of coaches, ranging from Philippe Lucas to Romain Barnier, but they don’t have the same mainstream milage culture as in the US (which is very “hit or miss”, whether the swimmer responds well to that kind of training), a culture that works well because the US has a really big selection pool. Bob Bowman (and Troy for that matter) seem… Read more »

I add the women’s 4X100 free relay in the list of potential medal in Paris.

Your medal predictions are almost absurd …

1) How is the men’s free relay a medal contender? Manaudou, Metella and Mignon probably won’t be around then. Russia, Hungary, Italy, GB and Australia look far more promising (not to mention USA).
2) Aubry very likely won’t be close to the medals in 2024.
3) The men’s medley relay won’t be anywhere near a medal in 2024.
4) None of the women you mentioned will be medal contenders unless a miracle happens.
5) Grousset, Ndoye Brouard and Marchand could medal. I think 4 medals are realistic (maybe one or two in gold).
6) Success in open water? Olivier might medal, although i would rather bet on Wellbrock,… Read more »

Why are you writing the same in every article? We get it, you have a problem with french swimming …

The live results page is so bad.

Everyone in the world could watch Australian Trials on Amazon Prime. Lol.

And it was high quality coverage.

You can’t compare those two. Swimming is far more popular in Australia, something like that would never be possible in France.

Still better than Omegatiming (at least for the american trials) sadly …

Actually he told l’Equipe (sports newspaper in France) that he won’t swim the finals. That will possibly let Clement Mignon take part in the finals later today (he was 9th overall in the heats, out of A final by 0.01) and bring more competitiveness to the field