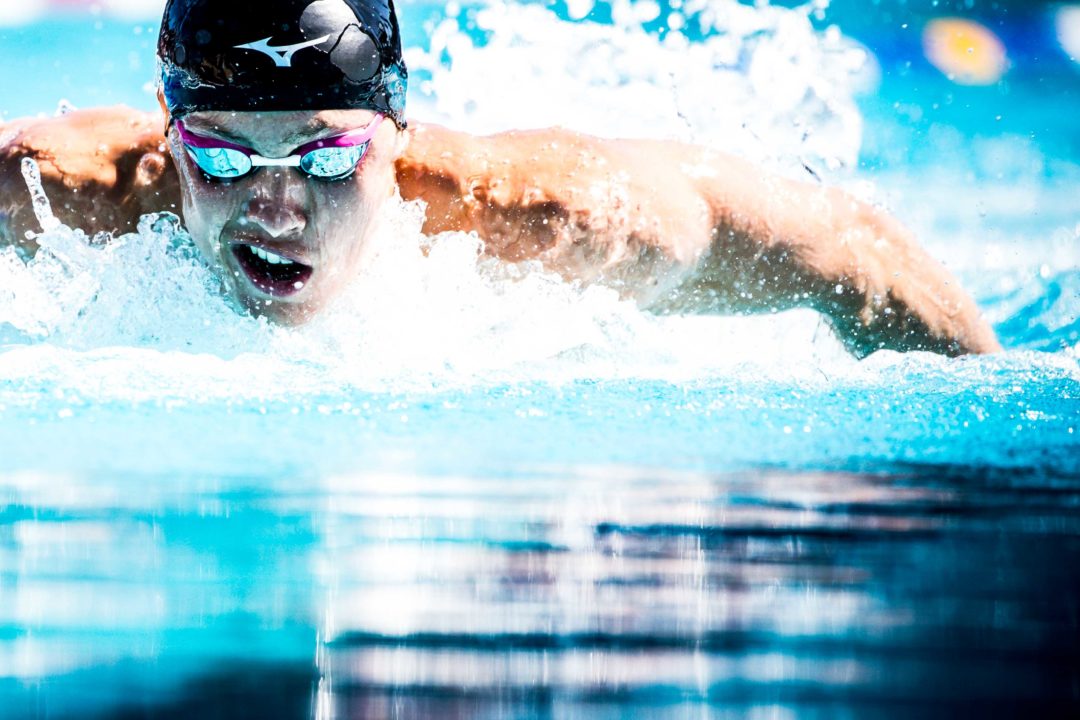 The third finals night of the 2020 Pro Swim Series in Knoxville is scheduled to have amazing duels in the A-finals, as well as have more Allan Jones Intercollegiate Aquatic Center pool records. This evening’s line-up will feature the finals of the 200 fly, 50 free, 100 back, 200 breast, and 400 free.

Among the races to watch, catch Worlds runner-up Hali Flickinger race in the 200 fly against teen sensation Regan Smith. Later on in the session, world record-holder Smith will contest in the 100 back against fellow teen stars NCAP’s Phoebe Bacon and Aquajets’ Isabelle Stadden. WUGs champion Lisa Bratton and Olympian Taylor Ruck are also set to race in the final tonight.

Then, 18-year-old Carson Foster is scheduled to be the center of two battles here in Knoxville. The first will be the 200 fly, where Foster is seeded 3rd behind Worlds finalist Zach Harting and Kentucky’s Mason Wilby. Then, Foster will battle another Worlds finalist, Zane Grothe, in the 400 free final.

More exciting races to keep an eye on are Simone Manuel V. Erika Brown in the 50 free, Annie Lazor V. Madisyn Cox in the 200 breast, Will Licon V. Nic Fink also in the 200 breast, and teens Emma Weyant V. Erica Sullivan in the 400 free.

17-year-old Regan Smith was out like a rocket during the opening 100 of the women’s 200 fly final. 25-year-old Hali Flickinger then began to close in on Smith and utilize her impeccable back-half endurance to surge on the teen. At the finish, it was Flickinger who touched a stroke-length ahead in a 2:08.34, with Smith taking second at 2:08.73.

Looking at the world rankings, Smith is now No. 10 in the world. Flickinger’s season best of 2:07.65 from the 2019 US Open still remains No. 1 in the world. Third-place finisher Danish Helena Rosendahl Bach touched the wall next in a 2:10.63, which just cracks the top-25 times in the world.

Winning the B-final was 14-year-old Bella Sims of the Sandpipers of Nevada, touching in a new personal best of 2:13.88. Sims now boosted herself from 75th to 30th all-time in the 13-14 age group rankings.

In a tight race home, it was Canadian Mack Darragh who popped out the win with a 1:59.29, chopping a full second off his prelims time. Sliding in for second was Cal’s Andrew Seliskar at 1:59.60, the only other sub-2:00 swim. Louisville’s Zach Harting took the bronze at 2:00.02.

Winning the B-final was NCAA champion Jack Conger at 1:59.69, which would have placed 3rd in the A-final.

Winning the 50 free in a new pool record and lifetime best was Tennessee senior Erika Brown at 24.57, just holding off World champion Simone Manuel (24.63). Brown just clipped 0.01s off her lifetime best of 24.58, remaining the 8th-fastest US performer in history and No. 8 in the world. Manuel remains No. 6 in the world with her 24.43 from the 2019 US Open.

Storming out on the last 5 meters was NC State Dutchman Nyls Korstanje, touching in 0.01s off his morning World No. 10 time of 22.15. Taking second was 17-year-old David Curtiss at 22.50. Representing Mission Viejo Nadadores and placing third was Ali Khalafalla, whose brillant underwater off the start earned him a 22.61.

Winning the 100 back in a new top time in the world is 17-year-old World record-holder Regan Smith, stopping the clock at 58.26. Her time also broke Olivia Smoliga‘s PSS record time of 58.73. Looking at the all-time world performances, this swim tonight by Smith is the 12th-fastest performance ever swum.

Taking third place was Canada’s Jade Hannah, registering in at 1:00.54. Kentucky’s Caitlin Brooks won the B-final with a 1:00.94, which would have placed 6th in the A-final.

Winning the B-final was 18-year-old Wyatt Davis, whose 55.97 would have placed 7th in the A-final.

After battling Emily Escobedo two lanes over during the first 150, it was Mission Viejo’s Annie Lazor who came out on top with a new pool record 2:23.06. Escobedo settled for second at 2:24.08, finishing ahead of IM-specialist Melanie Margalis (2:24.94).

Winning the B-final was Kentucky’s Gillian Davey at 2:27.92, which would have placed 6th in the A-final.

Winning the B-final was national teamer Athens Bulldog Andrew Wilson, clocking in at 2:16.21.

19-year-old Erica Sullivan blasted away from 2012 Olympic runner-up Allison Schmitt in the final 50 to win the 400 free in a new lifetime best of 4:06.36. Sullivan is now No. 3 in the world this year and the 2nd-fastest American behind Katie Ledecky. Sullivan is also the 12th-fastest US performer in history.

Badger Aquatics’ Kaersten Meitz won the B-final in a 4:09.32, which puts her at No. 9 in the world this year. The time would have also placed second in the A-final.

Just two lanes away from World finalist Zane Grothe was 19-year-old Florida Gator Kieran Smith, who both were under pace of the Tennessee pool record. In a heated stroke-for-stroke finish, it was Grothe’s blazing quick tempo that took out Smith by 0.23s.

Kinda unrelated thought, but how important do you guys think it is timewise to start the mixed medley relay with men? If the US was willing to go FFMM, we could have 3 world record holders (Smith, King, Dressel) and still a good freestyle leg. It would make the race more fun to watch, too.

I like the thought process but I think it’s just too discouraging mentally to try to make up the 10 or so second lead.

The USA will go FMMF with Smith-Wilson?-Dressel-Manuel, especially if Wilson can split a 58 low.

The Smith-Wilson splits were faster than Murphy and King in Gwangju.

Why not Smith, King, Dressel, and then one of the half dozen or so world class 100 swimmers the US has? (Farris, Zapple, Pieroni, Adrian, etc)

It’s quite a conundrum to select two female sprinters from three outstanding American world champions. Manuel may have opportunity to swim four relays, Smith three and King only two. But the “fairness” will be the last thing that coaches will worry about and I foresee a hot discussion on this forum about possible factors (objective and subjective) that affected coaches’ decision.

I like Olympic season. It isn’t only about one week at the end of July. The entire season from the very beginning is full of tension, challenges and check out points.
And it is all LCM where we can enjoy watching masters of strokes but not a pushing from the wall each 12sec.

Hali Flickinger has quite a set of guns on her, she must be lifting a lot. She also seems to tie up on the last 50 LCM in the 200 Fly. Anyone else notice that?

I didn’t watch the race but her last 100 was pretty solid, timewise. Fastest last 50 of the field. I wouldn’t be surprised if it was an ugly finish, though. Theres the occasional freak that can look good in the last 10m, but generally even the best 200 flyers get ugly at the end.

Milak didn’t look ugly at the end ….maybe the only exception

Typo – she also seems NOT to ever tie up on the last 50, etc. My word processor deleted & I didn’t catch it.

Smith and Bacon were brilliant. It doesn’t matter what they swim before-a swim is a swim. Often repeated and a counter factual. It could help (unlikely) it could hurtt (more likely) doesn’t matter. They train for it.

AND they are still quite young with great recovery capability..

Who Allison Schmitz suit sponsor? While ago she was wearing MP cap and TYT suit. Now it’s just a TYR suit and unbranded cap.

The TYT suit should be banned. Too many impressionable viewers.

She is wearing MP goggles.

She doesn’t have an official suit sponsor but is supported by MP. She tried MP suits last year but that didn’t go so well

Regan – wow and it seems like Bacon routinely goes 58 now

Bacon got totally overshadowed despite going sub 59 again. Baker and Smoliga must be feeling a bit concerned.

Baker has a good shot in the 2 back/IM in addition to the 100. I’m definitely worried about Smoliga though

Yeah. Bacon is a contender for sure. Crazy that Smoliga has swam as good as ever the past year and a half, and Baker set the WR in 2018 and they both might not make it. Coughlin is the only repeat qualifier 100 back since 1988….the odds are not in their favor

Regan Smith really is going to Ledecky the backstroke events huh??
Also, I know it’s January, but what is going on with Taylor Ruck? Last year was a bit meh and this isn’t the greatest of starts to Olympic year. A fair chance she won’t go to Tokyo individually in 200 free or 100 back at this point? Or am I jumping the gun?

Maggie MacNeil went 23.6/51.0 in backstroke against OSU so if she decides to swim the 100 at trials Taylor is in trouble