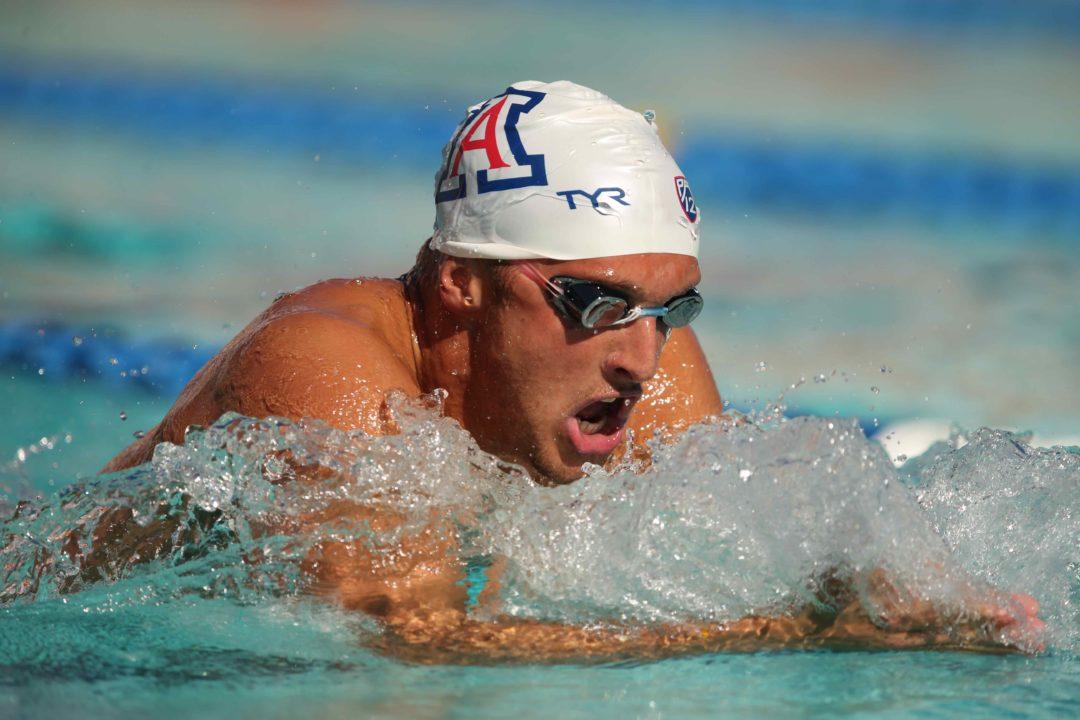 Welcome to the 2020 Desert Swim Camps!

Desert Swim Camp is hosted at the University of Arizona. The U of A coaching staff aims to create a positive atmosphere where competitive swimmers can learn and improve the skills needed to compete at a higher level. Desert Swim Camp offers a unique balance of intensive conditioning and thorough stroke instruction and analysis with our coaches and experienced staff.

Each day of camp offers a unique experience with the University of Arizona coaching staff featuring daily workouts, clinics with focus on stroke mechanics, and informational sessions that include sports psychology, nutrition, and a Q&A with head coach Augie Busch. Workouts will be conducted under the direction and supervision of the U of A swimming coaches.

Augie Busch was named Arizona head swimming and diving coach in July 2017. A UA assistant for eight seasons under his legendary father Frank Busch and a UA alumnus, Busch returned to Arizona after spending four seasons as the head coach at Virginia (2013-17) and the previous two seasons as the head women’s coach at Houston (2011-13).

Clif Robbins will join the Arizona swimming and diving staff after spending the last four seasons as an assistant coach at Virginia.

During Robbins’ four years at Virginia, he coached a trio of All-Americans, including Laura Simon, who finished third in the 100-yard breaststroke at the 2017 NCAA Championships with a school-record time of 58.20. Simon finished her career with nine first-team All-America honors, 12 honors overall and three ACC titles. Robbins, the 2016 ECAC Women’s Coach of the Year, also mentored Olympian Yannick Kaeser, the Swiss record holder in the 100 and 200 breaststroke and four-time All-American and school-record holder in the breaststroke, Ellen Williamson, who set a school record in the 100 butterfly and earned All-America honors in the 200 individual medley, and Luke Papendick, an All-American in the 200 backstroke.

Jesse Stipek, a former Olympic Trial Qualifier in 2012 and team captain, is starting in his first season as assistant coach, after being a graduate assistant for the Wildcats for two years. He helps with all aspects of the sprint group and recruiting.

Stipek comes to Arizona after swimming at the University of Wisconsin from 2007-2011, serving as a student assistant coach in Madison as well. As an assistant swim coach with the Badger Aquatics Club, Stipek mentored young swimmers and helped see them through to college and Olympic Trials.

Richardson brings a decorated track record of winning and has proven to be a successful recruiter in his collegiate career. During Richardson’s time at Pacific, he took the program to unprecedented heights. Under Richardson, Pacific became a consistent contender in the MSPF Conference and sent athletes to the NCAA Championships in five straight seasons; in 2018 Pacific was one of just two men’s and/or women’s programs to achieve an “A” relay cut without a full allotment of scholarships. In Richardson’s seven-year tenure, an astonishing 73 school records were established, including 12 in 2019.

Prior to spending eight seasons at his alma mater, Pacific, Richardson was the first ever head swimming coach at Fresno Pacific University, where he took the program from its inception and 2007 and turned into a perennial NAIA power in his five seasons at FPU. Richardson led the men’s team to back-to-back NAIA National Championships in 2010 and 2011 and the women’s team to a NAIA National Championship in 2012. In his five seasons, the men’s teams at FPU finished sixth, second, first, first and second while the women’s teams finished fifth, fourth, third, second and first.

Heller comes to Arizona from SMU, where she served as an assistant coach for two seasons. With the Mustangs, she coached four athletes that NCAA Championship appearances over two seasons, including 2019 American Athletic Conference Most Outstanding Performer Erin Trahan.