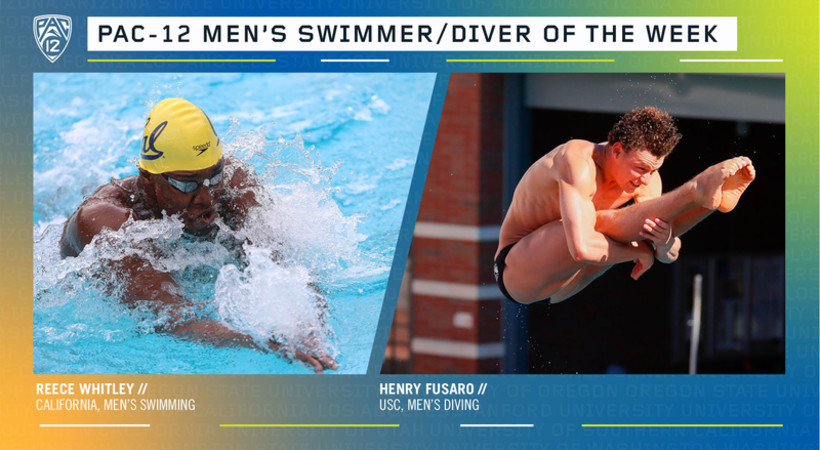 Cal's Reece Whitley and USC's Henry Fusaro have been named the Pac-12's Men's Swimmer & Diver of the Week.

MEN’S SWIMMER OF THE WEEK: Reece Whitley, So., California (Lafayette Hill, Pa.)
Whitley excelled in California’s two-day trip to USC last weekend, winning all four events he swam in. The sophomore swept the breaststroke events and swam the second leg of a 200-yard medley relay victory in the Bear’s 161-130 road win. His 200-yard breast finish (1:54.64) was nearly six seconds faster than the rest of the field. Whitley finished the weekend by winning the 200-meter (long course) breast event against UC San Diego with a time of 2:12.69, which cleared the U.S. Olympic Trials qualifying requirement of 2:17.89. He earns his second Pac-12 Swimmer of the Week honor this season.

MEN’S DIVER OF THE WEEK: Henry Fusaro, Sr., USC (Scottsdale, Ariz.)
Fusaro recorded three wins last weekend, giving him seven this season in dual-meet action, including three Pac-12 sweeps (against ASU, Arizona and Stanford) on springboard. The senior posted top scores against California in the 1-meter (358.28) and 3 meter (380.85) and in the 1-meter (373.37) and 3-meter (419.55) while facing Stanford. Fusaro earns his first weekly award and has earned two-career Pac-12 Diver of the Month honors.