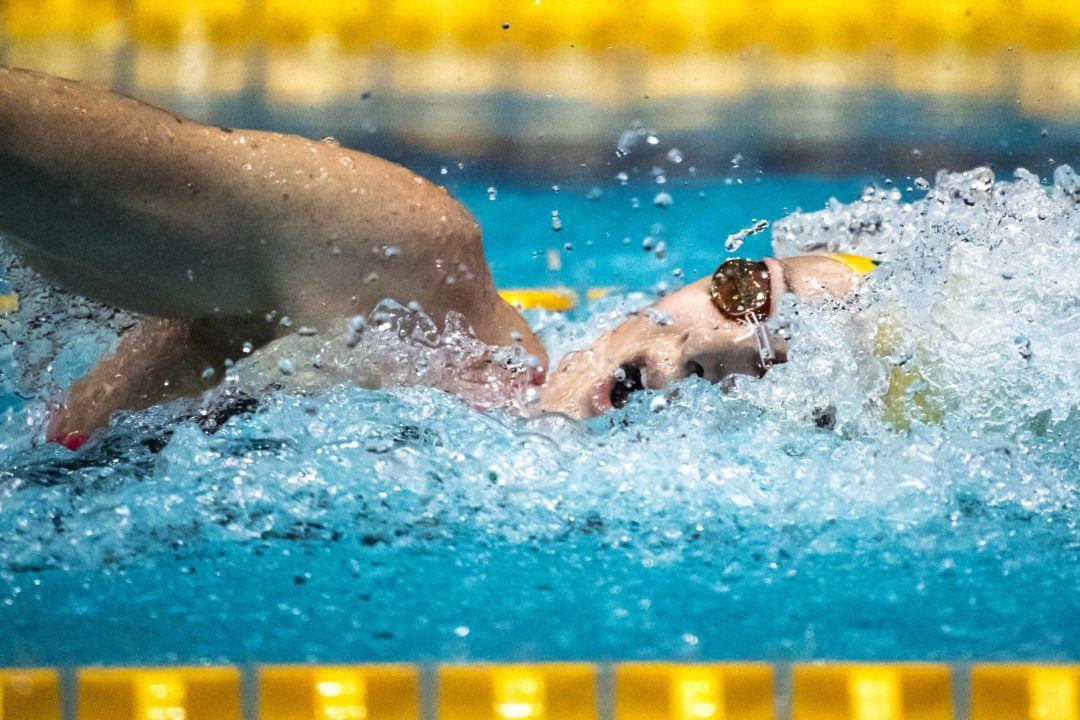 Cate Campbell will be looking to regain her women's 100 freestyle World title facing off against a tough field that includes Sarah Sjostrom and Simone Manuel. Archive photo via Mike Lewis/Ola Vista Photography

Heading into the women’s 100 freestyle final at both the 2016 Olympics and 2017 World Championships there was a similar storyline at play.

In Rio, Cate Campbell came in with the hot hand after breaking the seven-year-old super-suited world record less than a month out of the Games in a time of 52.06. She had further cemented herself as the favorite with a pair of 51-second relay splits on the women’s 400 free relay, and was the top qualifier out of both the prelims and semi-finals.

The now 25-year-old Swede produced the four-fastest swims of her career in the lead-up to the meet, including a 52.08 on the Mare Nostrum Tour in June, and then blew the doors off everyone when she led off the 400 free relay in a massive world record of 51.71. She continued to follow suit of Campbell by advancing first out of both the heats and semis in the individual event.

However, neither of these swimmers won gold.

The woman who did? Simone Manuel.

At the Olympics Campbell went out way too fast, flipping in 24.77, and simply had nothing left when she hit the 75-metre mark. Manuel and Penny Oleksiak took full advantage, tying for the win in what was a best time for both – 52.70. Campbell faded to sixth in 53.24.

In Budapest, Sjostrom went out almost identical to Campbell’s Rio split in 24.75, and then Manuel came back a full half-second faster (27.06) to edge her by .04 at the touch in a new American Record of 52.27.

Compared to her best time coming into each meet, Manuel swam 0.55 and 0.78 seconds respectively faster than that in the final. She’s proven to be clutch when it matters.

But can the 22-year-old Texan pull it out again? It’s going to be tough.

For Sjostrom, she hasn’t been on the same tear since 2017. The seven fastest swims of her career came that year, and in 2018 her fastest swim came in at 52.67 from the European semi-finals. She wound up winning the final, but the time of 52.93 left something to be desired.

Campbell has been throwing down straight fire as usual in-season, clocking 52.35 at the Australian Championships in April before a 52.12 at their Trials meet in June. However, she did lose her matchup with Sjostrom in Guangzhou.

Manuel, who has had no reason to rest, has been sub-54 five times in 2019. Her 53.30 from the Santa Clara International in June is the fastest she’s ever been in-season.

It’s all going to come down to who can perform under pressure. Recently, Manuel has proven that’s her, but the other two have shown they’re capable of going a bit faster.

When you think of who the expected medalists are in this event, odds are Sjostrom, Campbell and Manuel come to mind. But there are several others who could very well shake things up and find their way onto the podium.

In 2019, the only swimmer who has gone 52 other than Sjostrom and the Campbell sisters is Emma McKeon, who beat out Bronte for the second individual spot at Aussie Trials in a lifetime best 52.41. McKeon has been a mainstay on the Australian 400 free relay since the 2013 World Championships, and now has her second consecutive individual berth in the event at a major international competition after Cate withdrew from Budapest.

Based on her Trials performance, she’s on the best form of her career and has a great chance to snag a medal.

Comerford owns the fastest best time amongst the group at 52.59, but they’re all within 0.15. Both Blume and Ruck also have 51-second relay splits on their resume.

If those are the eight favorites to final, here are the women with the best chance to steal a spot or two. In the mix are Oleksiak, Ranomi Kromowidjojo and Femke Heemskerk of the Netherlands, Siobhan Haughey, Freya Anderson and Michelle Coleman.

After tying Manuel for the gold in Rio, Oleksiak took sixth in Budapest in 52.94. She had a bit of a down year in 2018, ultimately opting out of Pan Pacs, but was 53.60 at Canadian Trials this year which puts her back in the hunt.

Like Oleksiak, Kromowidjojo hasn’t been under 53 since the 2017 Worlds, and didn’t even contest the event at last summer’s European Championships. Heemskerk won silver there in 53.23, but has only been 52 twice (both in 2015). Both have been 53.49 this season and will be right on the edge to final.

Haughey is coming off a PB of 53.23 on the Mare Nostrum Tour, and Anderson and Coleman have both split sub-53 on relays.

Darkhorse: Zhu Menghui, China. Zhu was a semi-finalist in both Rio and Budapest, and then swam a best of 53.56 to take second at the Asian Games last August. She’s still just 20.

I’d love to see every woman in the final swim under 53.

I wouldn’t even be surprised if that’s what it’ll take to qualify for the final. Either way, this was possibly the most stacked race in the 2017 Championships, and it may be even more staked this year.

The 100 free has changed a lot in 7 years, with only one swimmer breaking 53 secondm( no super suit) to the entire projected top 8 all going under 53 in the last 5 years

Manuel and Comerford want it, I think, just a tad more that the rest – yes, speculation.
I put both on the podium.

Manuel will miss the podium

I mean, maybe you’re right….. but I’m actually really curious as to how you arrived at that statement, were there any signs throughout the season that indicate the American duo wanting it more?