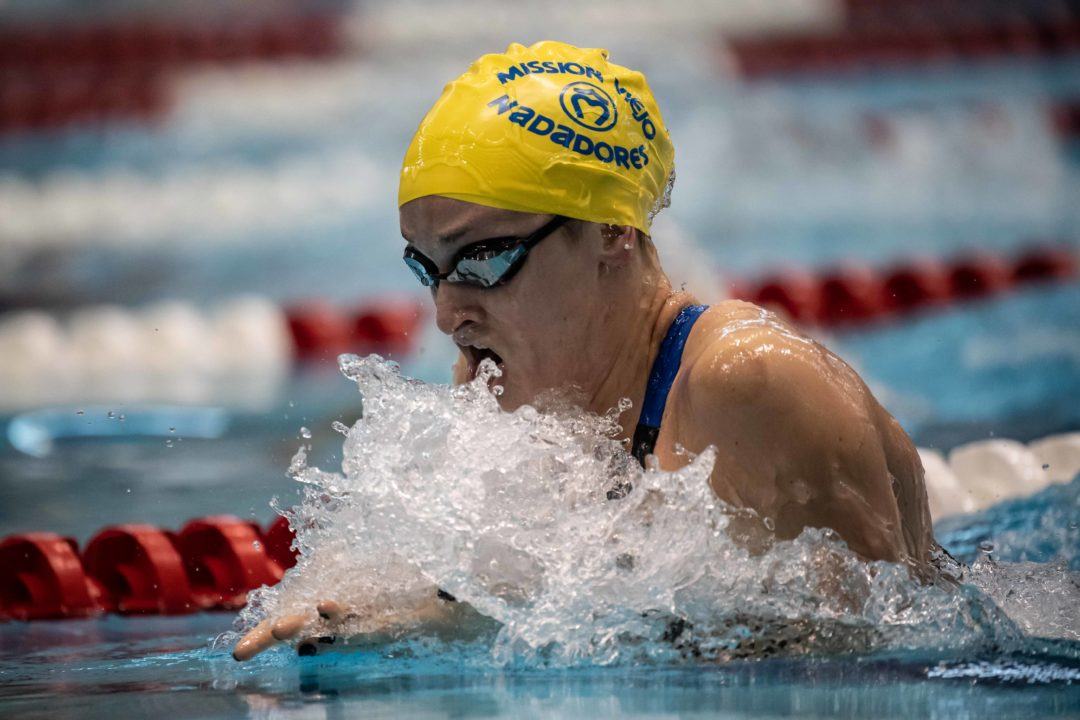 Watch all the race videos from day 2 of the Richmond Pro Swim Series. Stock photo via Mike Lewis/Ola Vista Photography

Swimming a lifetime best in the men’s 200 free was another Olympian, Caeleb Dressel. The Florida post-grad won the event with a 1:47.31, dropping from his previous PB of 1:47.45 at the 2017 US Nationals. Dressel later went on to win the 100 fly in a 52.08, defeating runner-up Giles Smith and 50 back champ Michael Andrew, who sunk to 8th place.

Caeleb Dressel took off like a bullet, and managed to hold on to win the event. He was out in a speedy 51.91 with roughly a body-length lead at the halfway mark. Zane Grothe was closing on Dressel quickly on the last 50, and ultimately ended up in 2nd following his Gold medal in the 800 free last night.

Annie Lazor backed up her top seed by throwing down a 1:06.72 to win the event by over 1 second. Sophie Hansson, one of the top NCAA freshmen this year, took 2nd with a 1:08.05, narrowly beating out Bethany Galat. Alia Atkinson, the winner of the B final, would have tied for 4th in the A final with her time of 1:08.55.

Cody Miller managed to hold on to win the race tonight in an incredibly tight finish. Miller was out the fastest in the field – 28.31, but the race only tightened as it went on. Andrew Wilson outsplit Miller by about 2-tenths of a second on the 2nd 50, bringing himself just 0.06 seconds behind Miller at the finish. Nic Fink was just 0.01 seconds behind Wilson for Bronze, and Kevin Cordes was 4th with a 1:01.08, just .03 seconds off Fink.

Olivia Smoliga, the PSS record-holder in this event, managed to win the race tonight, touching as the only swimmer under 28 seconds. Ali DeLoof was right there with Smoliga throughout the race, but ended up touching just 0.19 seconds behind Smoliga. Katharine Berkoff then led the rest of the pack, getting her hand on the wall in 28.55 for 3rd.

Michael Andrew was just off his record-setting swim from this morning, but still managed to win the race by a pretty comfortable margin. Ryan Held just barely got his hand on the wall before Matt Grevers to earn the 2nd place finish. Grevers was just 0.04 seconds ahead of Ryan Murphy to earn a Bronze medal.

Kelsi Dahlia took the event, swimming just a little faster than she was this morning. Dahlia took the lead around 35 meters in and never really looked back after that. Claire Curzan shattered her own 13-14 girls NAG again tonight, this time blasting a 58.61. That makes her the first 13-14 girl to ever break 59 seconds in the 100 fly. Farida Osman ws 3rd at the 50 mark, and managed to hold on for 3rd tonight. Amanda Kendall was 2nd at the 50 mark, but was overtaken by Curzan and Osman ran her down on the final 50.

Caeleb Dressel used a stellar back half to win this race, much like he did this morning. He was 7th at the 50 mark, but threw down a 27.09 on the 2nd 50 to vastly out-pace the rest of the field. Giles Smith was 2nd at the 50, and managed to hold on to that 2nd place postion on the 2nd 50. Zach Harting and Santiago Grassi tied for 3rd, but even more interestingly, they were tied for 3rd at the 50 mark as well, both clocking a 24.79. Michael Andrew, fresh off a win in the 50 back, tore to a 24.27 on the first 50, but then faded on the back half and ultimately touched in 8th.

Ella Eastin took the lead towards the end of the fly leg and never looked back. She expanded her lead through backstroke, then Madisyn Cox tightened it up on breastroke, but Eastin ran away with it on freestyle. Madisyn Cox and Leah Smith each picked up their 2nd podium finishes of the night, Smith’s 3rd of the meet. Cox was 3rd in the 200 free earlier and finished 2nd here, while Smith was 2nd in the 200 free earlier and finished 3rd here. Smith also came in 2nd in the 800 free last night. Brooke Forde was first at the first 50 wall, but ended up in 4th for the back half of the race, touching in 4:45.06.

Chase Kalisz controlled this race from the start, knocking off 7 seconds from his prelims time. Tomas Peribonio held on to 2nd the whole way through the race, establishing himslef way ahead of the rest of the field behind him and Kalisz. Peribonio’s time of 4:16.87 establishes a new Ecuardorian record, and puts him 11th in the world this year. Sean Faikish nearly ran down Zachary Tan for 3rd, but ended up 4th in 4:26.86