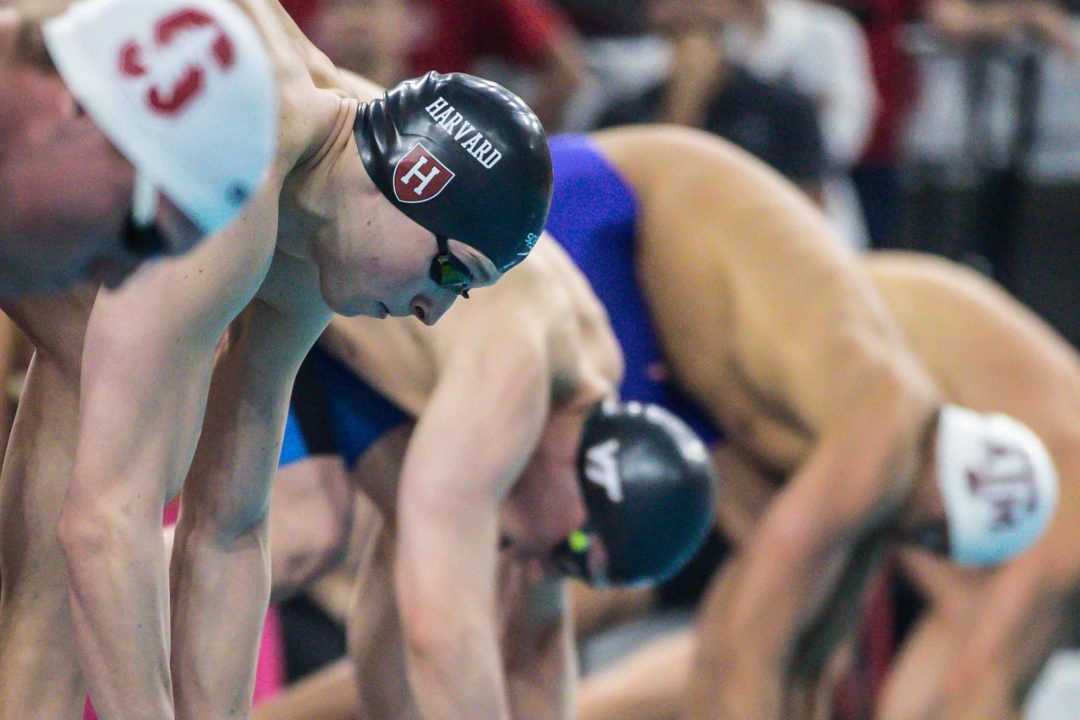 Watch the timed finals of the 800 free relay from day one of the 2019 men's NCAA championships. Current photo via Jack Spitser/Spitser Photography

Heat 2 started the fireworks. Harvard’s Dean Farris smashed the American record in the 200 free leading off – he took advantage of a totally clear pool to go 1:29.15 in a smashing swim. Farris gave up the 200 free individually to focus on the 100 back, and that decision looks like a mixed bag already. Farris would be a legitimate title contender in the 200 with this swim… but now has a chance to go after a different event where he could also pull off a win with a huge swim.

NC State took over after the Farris show, though – they went 6:06.63, getting a huge 1:30.61 split from Coleman Stewart. He was the swing swimmer on this relay – if NC State used him, we knew they were going after a repeat national title. If they didn’t, they were gearing up more for the other four.

But in the next heat, Texas took a different approach from Harvard. Instead of leading off with (former) American record-holder Townley Haas, they used him on their anchor leg. Freshman Drew Kibler led off in 1:32.06 to keep Texas in the hunt. Austin Katz was 1:31.45 and Jeff Newkirk 1:31.91 before Haas hit the pool. He went out in a blistering 20.01 to his feet in the first 50 and though he did die off a little by the end of the race, he had the lead by the 100-mark and wasn’t going to be caught. Haas split 1:29.66 – the fastest relay split in history. Interestingly enough, that title of Fastest Relay Split used to be held by Farris – so the two essentially swapped records tonight.

Texas went 6:05.08, breaking American, U.S. Open and NCAA records in a dominant showing in front of a boisterous home crowd.

Cal took the early lead in that heat on a 1:30.14 leadoff from Andrew Seliskar. That’s one of the faster swims in history, as only three men have broken 1:30. Cal wound up third in 6:07.31 – they held off Indiana in their heat, but couldn’t beat NC State’s time from the prior heat.

Florida held up its solid swimming from SECs with a fifth-place finish. Maxime Rooney went 1:31.60 on a spirited anchor leg trying to run down Cal and IU, while freshman Kieran Smith was 1:31.64. Florida went 6:09.14, bettering its SEC time by almost a second and a half.

Tennessee scratched out of this relay despite coming in with the 18th seed. That allows them to use star sprinter Kyle Decoursey on the other four relays. He swam this relay at SECs and sat out of the 400 medley.

The big win from Texas put the Longhorns in control in team points early – they lead, with NC State second. The top 5 teams in this relay were the exact top five teams from last year’s final team scores, though in a slightly different order.

Obviously, the win puts Texas in a good position. Indiana’s team points hopes take a little bit of a hit, even though they swam pretty well time-wise. They were second in this relay last year, spurring their stellar early-meet run.

Cal moves way up from last year – they were 6th at this point last season, and taking 3rd has to be considered a pretty big plus for the Golden Bears.

Is everyone else seeing the women’s meet using the Live Results link??

Fastest bean on either side of the Mississippi

Anyone know how to watch a replay of the broadcast?

You can watch the replay of last nights session on ESPN3