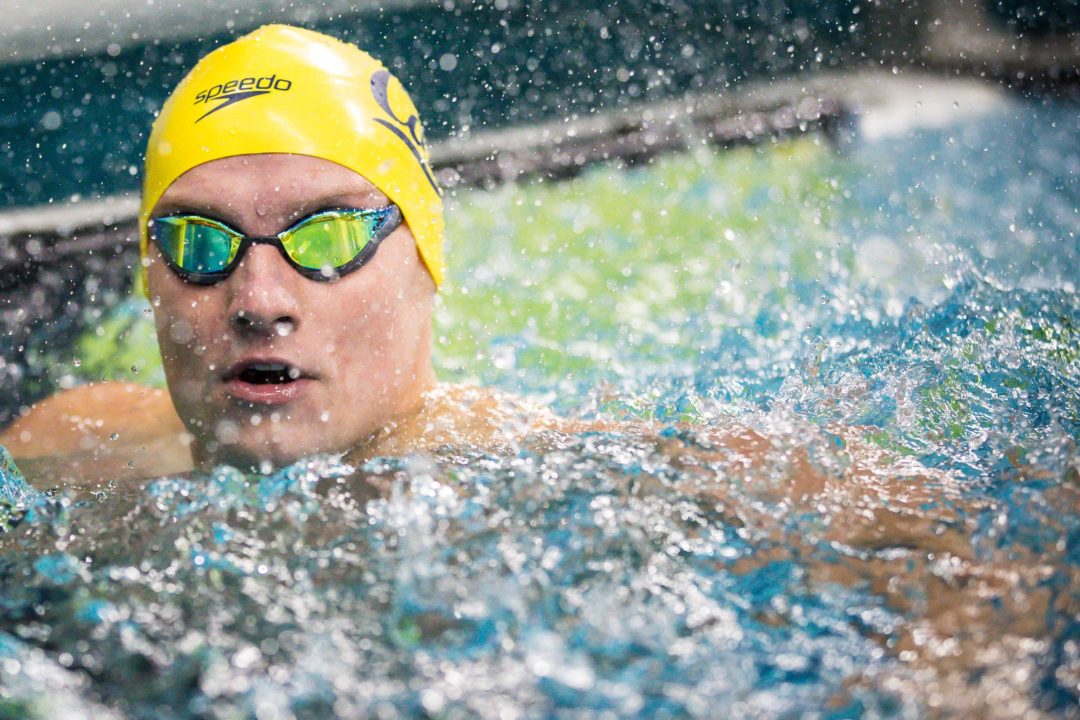 Thanks in part to a re-swim from sophomore Daniel Carr that catapulted him from first alternate in 17th (45.45) to 4th (44.86), Cal leads all teams on day 3 with both the most individual finals swims (9) and A-final appearances (8). Texas, currently sitting in 2nd place in the team standings after day 2, has the 2nd most overall finals swims individually (7) and A-final appearances (5).

For those unfamiliar with swimming terminology, the concept of “Ups” and “Downs” is a good way to track which teams performed best during prelims. In prelims at the NCAA Championships, swimmers and divers qualify for one of two finals heats: the top 8 finishers make the A final, and places 9 through 16, the B final. In finals, swimmers are locked into their respective final, meaning a swimmer in the B heat (spots 9-16) can only place as high as 9th or as low as 16th, even if they put up the fastest or slowest time, or score the most diving points, of any heat in the final.

Remember the 100 fly in Iowa when Texas had 6 swimmers in the A final?

With all the talent NCState has… Interesting that Stewart was their only A finalist, as he accounts for both of the 2 A final placements: 100 fly /back

Plus, he has an arguably equal fighting chance to win both of them

You can say that for a lot of teams. Where are the Texas freshman. They were supposed to be a top 5 team.

That’s great but the Texas fan base was saying all year that the freshman class by themselves could be a top 5 team.

I’m fairly certain that comment was made by a single commenter who was intentionally over-exaggerating.

I am amazed that many Texas swimmers are not dropping time. They don’t taper for conference They dont try to win dual meets. They should be swimming personal bests. Is this another taper fail for Eddie like last year?

It’s hard to call anything a “fail” when you’re still in contention for the NCAA title, but when your competition is hitting every single swim like cal is, it’s hard to call it a “successful” taper too.

Andrew hasn’t run final ‘time’ numbers, but it appears that Texas is, overall, having a better meet than last year. Cal is just having a monster meet.

“You can say that for a lot of teams”

That’s quite a broad over generalized statement to make. I was mainly referring to state because some of their finalists in the B finals were A finalists last year… I. E. Vazaios in 100 back

Good question, they got stucked in the B finals with some other talented swimmers.

What in the heck is happening at Tennessee? Zero individual swims thus far even with 2 seeds at 4th position? Diving is carrying swimming in MAN Vol land! Thank goodness – give that diving coach a raise!!!

Cal fans start to complain about diving in 3…2…1

Nice. I consider myself more of a Michigan fan though. Anyway, I am always up to watch some fast swimming regardless of what cap their wearing

Sorry, couldn’t resist. Being a big fan of both Eddie and Dave, I get tired of the noise.

IF Cal does win, it will be huge because their divers don’t score at all.