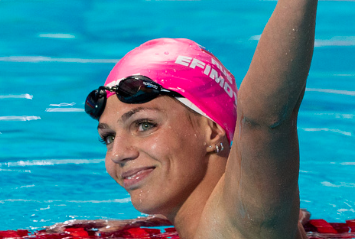 Though the United States added only one gold medal on day 6 of the 2019 FINA World Championships, World Records from Caeleb Dressel and Regan Smith made it feel like the USA hit a gold rush. As the finals of the men’s 100 butterfly and women’s 200 backstroke aren’t until day 7, Team USA doesn’t add medals in those races today.

Concerning medals the USA currently has, Simone Manuel took gold in the women’s 100 freestyle in a new American Record time of 52.04, swimming in lane one. Later, Ryan Murphy won silver in the men’s 200 backstroke. To close out the session, the men’s 4 x 200 freestyle relay team of Andrew Seliskar, Blake Pieroni, Zach Apple, and Townley Haas combined to win bronze, just out-touching the Italians by 0.03.

The Australians brought home 1 gold and 2 silver medals on night 6. Cate Campbell won the Aussies’ first medal of the session, a silver, in the women’s 100 freestyle. Later, Matthew Wilson took silver in the men’s 200 breaststroke. Finally, the team of Clyde Lewis, Kyle Chalmers, Alexander Graham, and Mack Horton won the men’s 4 x 200 freestyle relay in 7:00.85, a second ahed of the Russian team.

Russia was the most dominant force in the pool today, bringing home a total of 3 gold medals and 1 silver. Russia won both the men’s and women’s 200 breaststrokes today, with the men’s victory coming in World Record fashion from Anton Chupkov. Yulia Efimova did not break the World Record, but still won the women’s 200 breast by over 2 seconds. Evgeny Rylov defended his 2017 title in the men’s 200 backstroke, once again beating Ryan Murphy for the gold medal. Finally, the Russian men’s 4 x 200 freestyle relay team managed silver, hitting the wall just in front of the American foursome.

Sarah Sjostrom won Sweden’s only medal of the day, a bronze, in the 100 freestyle. Tatjana Schoenmaker won a silver medal for South Africa in the women’s 200 breaststroke, the only one for her country tonight. Sydney Pickrem won bronze for Canada in the women’s 200 breast, as did Ippei Watanabe in the men’s 200 breast for Japan. Luke Greenbank propelled himself to bronze in the men’s 200 backstroke, the only medal for his country tonight, even though the British had been favored for the 4 x 200 freestyle relay coming into the competition, where they ultimately finished 5th.

if they scored world champs like a normal meet (like with points for top 8) who would have won?

Swimswam… Can you do a separate Men and Women’s medal tally? Would be interesting to see the top nations on either side of that.

Can I be a fan of Sun Yang then?

Someone else has taken a peek at her IG

I expect Sweden to be the 10th country with a gold medal. Sjostrom is a class apart in the 50 fly.

Looking from an Olympic events only perspective, it currently reads:

Certainly not the usual US dominance… Read more »

Not sure how he is trying to alter the statistics, he is just picking the Olympic events. The US are by far the best performing swimming nation in the world (there is no-one close), Australia at it’s best is competing with a a number of nations for 2nd, 3rd or 4th.
I’m enjoying the performance of Dressel & Regan Smith as much as I’m enjoying the relay wins for Australia, not too mention the performances of Milak & Peaty, taking the Aus v US out of it.
If Australia can repeat this performance in the Olympics & win 6 golds & 15 medals, I’d be ecstatic. For the US anything under 10 golds, they are under performing.

If it was the Olympics, the Aussies would be underperforming….9

I do not consider the victory of Efimova

Save your 80 IQ points the stress. The event has finished & Yuliya won by 2 secs .

That is no doubt.

lol – this is the second mention of her instagram frivolities ….lol

@TexasTapWater. Are you jealous Madisyn dumped you for Dean Farris?

USA is proving the most dominant and oldest country on the Earth! God Bless the United States of America!

It’s definitely not the oldest…

Dominant ? I wish. This competition is hardly the USA’s brightest moment. In fact, its been a major disappoint for them.