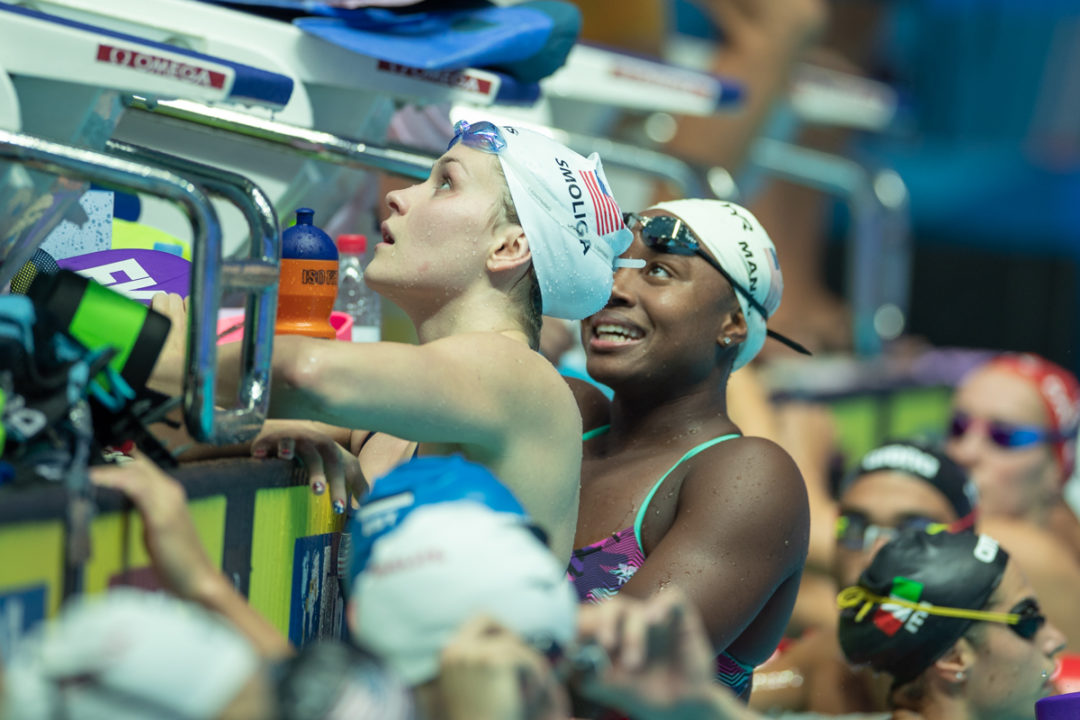 The Americans boast two defending World Champions in Caeleb Dressel (100 freestyle) and Chase Kalisz (200 IM), as well as a relay looking to defend its 2017 title and World Record in the mixed 4 x 100 medley. Given the different makeup of this year’s team versus 2017, the USA will be forced to alter its lineup, though Lilly King and Caeleb Dressel‘s spots as the middle of the medley relay are likely safe.

The United States is off to a rough start in Gwangju, but megastars Dressel and Chase Kalisz could begin to turn the tide if they’re able to produce some inspirational results in the heats.

Starts, particularly in backstroke, have been somewhat of an issue the past couple of days. The heats of the women’s 50 back will swim this morning and will test whether or not the technical/equipment issues of day 2 persist.

Would love to see a Smith/Wilson/Conger/Comerford prelims relay.

I’m hoping it will also be Smith/Wilson/Conger/Comerford

It will be hard for Smith to post a great time though if many of the other nations put in male swimmers first, which is likely, but all she has to beat is 58.9 to be the fastest American at this meet currently and she has been 58.4 this year. Really hope she is in form.

I like this order..would be good to see if Wilson can replicate a 58-high/59-low performance in the AM and to see where Conger is at. I also think Smith will be anywhere between 58.3-58.6 if she’s in form

Yes, hopefully they use Smith, but there is a chance they throw in Grevers or Baker :(. I think they have to use a male breaststroker (save King for finals, using Sumrall is a risk, Mandrew is a risk so Wilson is the way to go), so it’s up to whether they use Conger, Dahlia, or McLaughlin on Fly (save Dressel for finals) and whether they use Comerford or Apple or Adrian on free (save Manuel for finals). They shouldn’t use Pieroni because he has the 100 FR heats and semis today. The coaches can’t ignore the fact that the girl went 58.4 this year. If they do ignore the fact then idk what to say. I have a bad… Read more »

I agree that they should put Regan Smith as the lead off in prelims I have a feeling she’ll go 58.3

Let Smith get a time now..I bet she goes faster than 58.9…a trial for the womens 4×1 medley on Sunday you could say

Marsh could easily block this from happening.

I know 🙁
But Greg is the head coach and he gets the final say, so I think there’s a great shot Regan will be put in

US has to go with Murphy/Grevers on back. Both are 6 sec clear of Smith/Smoliga/Baker. King is within 6 on breast of Wilson. Dressel we’ll see but likely at least 6 of not closer to 7 sec on Dhalia. Any of the US freestylers have to be under 47 to even approach 5sec clear of Simone. All things being = use the men for back and breast and women for fly and free as a) there is usually a closer gap with fly/free and b) cleaner water. King and Dressel slightly turn the table here for a brst /fly swap, but Manuel is much too close to the male freestylers to even consider going WWMM.

Throw in McLaughlin! Get her another swim before the 4X200. She was only a couple tenths back from Dahlia’s time in SFs.