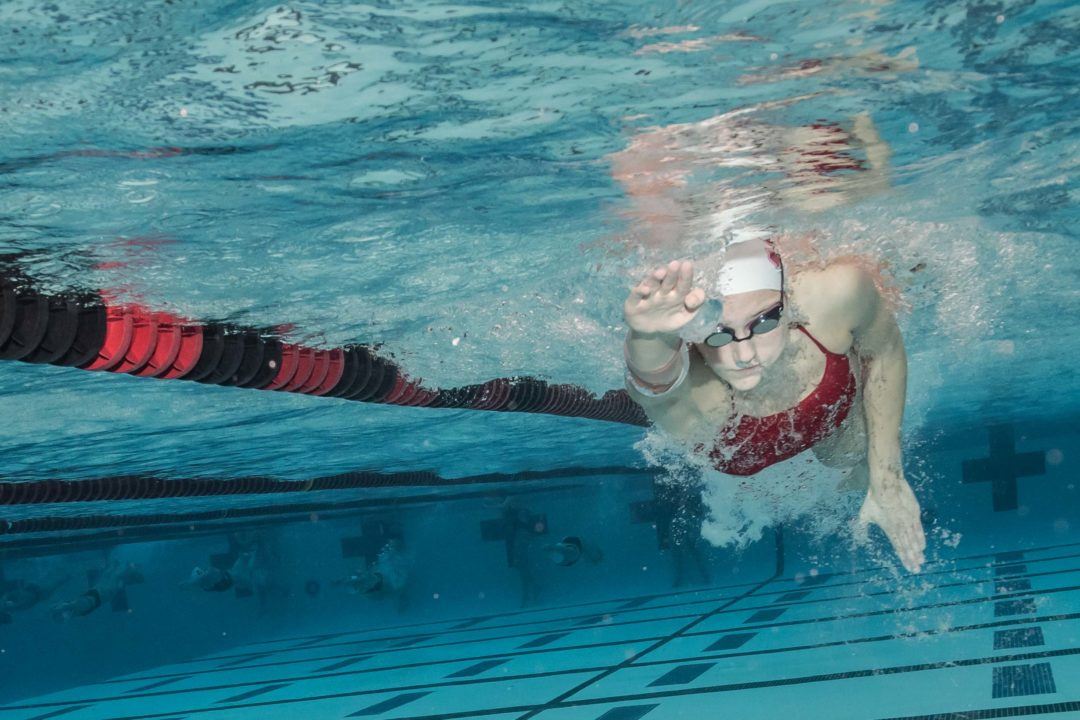 Katie Drabot is leading the chase pack behind the leaders of the industry, Katie Ledecky and Leah Smith. Archive photo via Mike Lewis/Ola Vista Photography

It might feel redundant to start this one out as we usually do — Katie Ledecky is going to run away with it, and then Leah Smith will probably be well ahead for 2nd. But, based on the racing done since last summer, that looks like it may very well be the case again.

Ledecky has been extremely fast this season – 3:57.94, to be exact – and her insane 1500 free from the Indy PSS tells us that she’s already elevated her game since going professional. After a stagnant 2017 (and it feels utterly wrong to write that word regarding her performances, but while she was well ahead of the rest of the world in the 400 free last summer, she was well off of her best) she has shot right back up to the level we’re used to.

It’s no surprise that Ledecky won’t have to do anything more than her Indy time to sail through to qualifying for Pan Pacs, but she has really been on fire since finishing up at Stanford. Meanwhile, Smith has been as fast as 4:04.72 this year, done just the other day at the Santa Clara PSS, which is good for 6th in the world rankings. Smith is a silver medal threat in this event for Pan Pacs, so any other competitor looking to snag a spot on the team in this race is going to have to pull out a big drop.

Ledecky’s Stanford teammate Katie Drabot has grown into her role as a do-everything swimmer on the Cardinal lineup, but her 500 free really took off this year. Taking 2nd behind Ledecky at NCAAs with a very strong 4:34.86. She’s been 4:08.29 this year, already in the world’s top 25, which is a good three seconds faster than she went at Nationals last summer. She has the hot hand, has undergone big drops in yards, and looks primed for some surprising speed.

UGA alums Hali Flickinger and Melanie Margalis, though this isn’t the event of primary focus for either woman, have both been fast this year at 4:08’s right behind Drabot. That said, the 100 back and 100 breast are the other two events that day in Irvine, so they may race the prelims for fun. Neither has gone for a roster spot in this event the last few years, though, so we’ll focus on some other swimmers who are focusing on this race.

Open water stars Haley Anderson and Ashley Twichell rank in the U.S. top ten this year at 4:09.9 and 4:11.3 for 8th and 10th, respectively. Aged 26 and 28, there’s someone just about half their age sandwiched right in at 9th. That’s Clovis Swim Club’s Claire Tuggle, who, at 13, swam a 4:11.37 at the Irish Open this spring. Tuggle has been on a time-dropping rampage the last couple of seasons, as most people her age do. It’s a safe bet to predict she’ll crack the 4:10 barrier this summer, but let’s try to back off from tracking young swimmers’ successes with our grandiose expectations. Tuggle may drop 5 seconds, she may add 2 — let’s just enjoy her talent for her age, for now.

There’s another teenager in the field who has shaken things up in distance races this year: Erica Sullivan of the Sandpipers of Nevada. Cracking 4:10 to win the 2017 US Open title (4:09.43), her 4:12.01 this year has her tied with Evie Pfeifer in the US rankings. Pfeifer is another name to pay attention to — a standout freshman season with the Texas Longhorns landed her in the 500 free A final, and her 4:12.0 from a local Texas meet a week ago was a huge four-second drop from her 2017 best.

NC State alum Hannah Moore and Auburn alum and IU post grad group member Ashley Neidigh return from last summer’s Nationals A final. They rank 12th and 13th this year at 4:11’s, along with 2018 NCAA runner-up in the 1650 free, Ally McHugh, whose 4:11.41 ranks 11th in the US.

Claire Tuggle will be 14 at Nationals. It’s really depends on what she with her team are targeting this season. Her performance at her first international meet in Dublin was sensational and that changed her status from the very young promising girll who is up to beating NAG records to the swimmer who can compete for the spot at National team. Nevertheless she may still focusing on major junior meets this season. And that is not a bad idea at all. Based on her FINA ranking this season the 400 free event is her strongest one. But as this article clearly showed her chances to be on American team at this event are not high. The 4×200 relay is more… Read more »

Junior pan pacs must be her main goal of the summer. I hope so. I like that meet every 2 years. We can see the next US stars in action. So many US big names have shined at that meet in the last decade.

If I were Tuggle’s coach I would not have her do much of a taper for Nationals to try to be in top form of Jr. Pan Pacs. In such a case we should not expect to much at Nationals.

A 13-year-old’s taper can pretty much boil down to: “stop drinking soda and get to bed on time for 2 weeks.”

Karl, this is a great write up. I appreciate: the appeal to lay off crazy expectations for an almost-tween, a darkhorse pick I overlooked, and the fact that Margalis has been 4:08 (doesn’t bode well for her hopes of avoiding the 4IM…) For predictions I would add Flickinger and one of the open water swimmers into the final.

Also, look at the headline photo by Mike Lewis. Around her right arm appears a perfect bubble ring. Weird!

Margalis and flickinger are so talented. Because of the strength of the US team they are sometimes underrated but they are both internationally competitive in such a broad spectrum of events!

Yep, I had a hard time leaving out Haley Anderson because she seems to always find her way into the top 8. Also wanted to throw Erica Sullivan or Ashley Neidigh in there.

I think we all forget that Flickinger went a 4:33 in the 500 as a senior at UGA, and Margalis is a phenomenal mid-distance freestyler. I just don’t think either of them wants to add the 400 FR as something they’ll be gunning for a roster spot in, what with both probably vying for a 4×2 spot (though more so Margalis) and then having grueling events they want individual spots in (Margalis the IMs, Flickinger 2 fly/2 back/IMs maybe). The 400 also has… Read more »

Tuggle top 5. But we will see how Runge is after pro meet.

I think Ledecky’s going to win this one

Keep an eye on Courtney Harnish