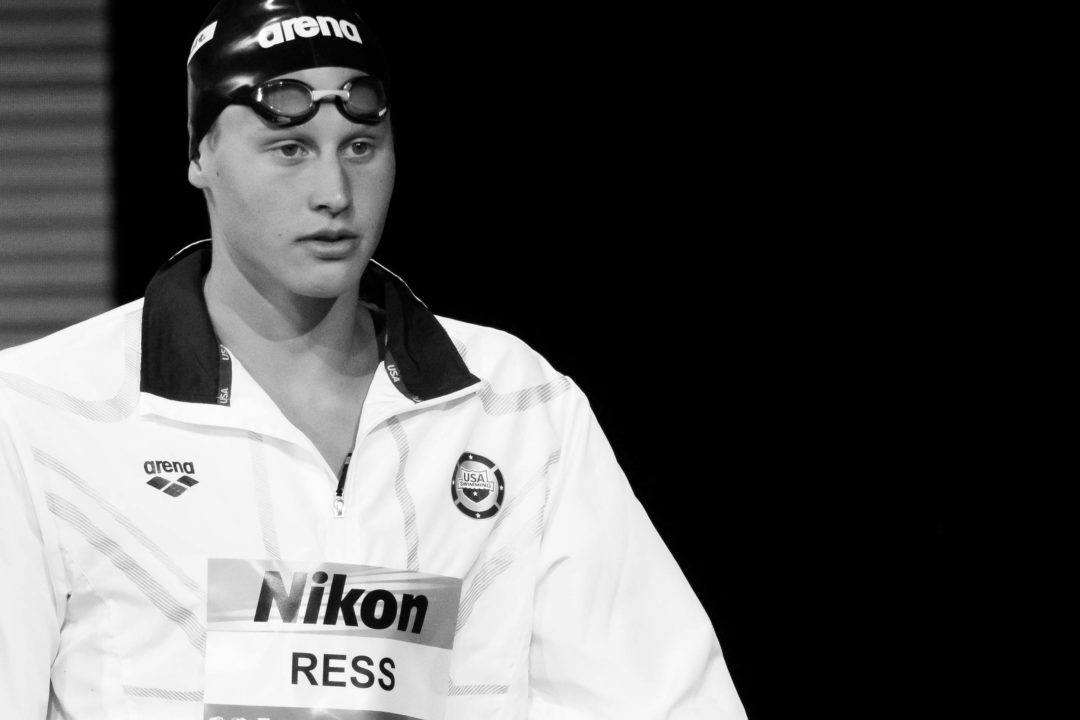 After a morning PB in the 100 free of 49.14 to lead prelims, Justin Ress will contest the race again tonight with the 49-second mark in sight. Archive photo via Mike Lewis/Ola Vista Photography

Dahlia and Mallory Comerford are also set to race in the 100 free A final, where Margo Geer posted the top seed this morning at 54.07.

Dahlia is now ranked 5th in the 2018 world rankings.

Aliena Schmidtke of the Ohio State post grad group was touched out by Seidt, taking fourth in 59.33, just ahead of Louisville’s Mallory Comerford (59.36). Indiana Swim Team’s Christie Jensen was 59.69 for 6th.

After going 52.47 for a tenth off of his old best, Michael Andrew has improved even more tonight. His time of 51.86 is his first venture under 52 seconds, ever, and he now ranks 15th in the world standings. The only American ahead of Andrew now this season is Jack Conger with his #2-ranked 51.00.

Giles Smith of Phoenix Swim Club raced to 2nd, looking to gain a lot of ground on Andrew towards the end of the race. Smith touched at 52.55.

Out of the B final, Noah Lense of Ohio State Swim Club rocketed to a 53.25 to win. His time would’ve placed third in the A final.

Schmitt’s pursuants caught up to her, though, as Cierra Runge got her at the wall, touching in 4:08.99. Kaersten Meitz from the Purdue post-grad group was just short of Schmitt, settling for 4th at 4:09.32.

That was a season best for all of the top four, while this is Meitz’s fastest in-season time ever, the previous mark standing at 4:09.46 from last May. Her best ever is a 4:08.38.

Zane Grothe was out very fast, well ahead of the field, while Anton Ipsen made a huge move over the last 100 meters. Both men spinning furiously at the end, it was Grothe who held on with a 3:48.69, as Ipsen grabbed 2nd in 3:49.52.

Annie Lazor, who swam undergrad for Auburn and is racing Unattached – Mission Viejo, grabbed 2nd with a 2:26.55. That time is her 4th-fastest ever.

2018 TYR Pro Series points leader Chase Kalisz wins it here, going 2:10.97 in his second race of the session. He has already picked up a third place finish in the 100 fly tonight. He’s already been 2:09 this year, a lifetime best, but he was well ahead of the rest of the field.

Devon Nowicki of Michigan Lakeshore Aquatics hit a 2:14.55 to win the B final. His old PR was well back at 2:17.07, a great swim for the Oakland University swimmer.

Siobhan Haughey raced past Margo Geer at the finish, clocking a 53.86 to win, just off of her LTB. Geer settled for 2nd in 54.20, ahead of Allison Schmitt‘s 54.34. Schmitt already raced the 400 free tonight, where she placed third.

Sporting a beard, Indiana post-grad member Blake Pieroni touched the field out for the win here tonight with a 49.04. That ties his season best from Indy’s PSS stop in May, which also stands as his fastest in-season swim ever.

Carson Foster couldn’t improve upon his morning swim of 50.37, but that time does still rank at a tie for 6th all-time in the 15-16 rankings.

And another one this time about Abbey Weitzeil
https://www.usaswimming.org/news-landing-page/2018/07/06/abbey-weitzeil-is-mastering-her-confidence-for-another-olympic-run

Impressed by Allison Schmitt’s day. 54.34 after swimming a very decent 400 free. She’s really back.
Here’s a recent article about her on the USA Swimming website.
https://www.usaswimming.org/news-landing-page/2018/07/05/allison-schmitt-is-back-in-the-water-and-more-excited-than-ever

Happy to see her back too . a 54 in the 100 free is a serious indication of her shape building up for this summer

To me, it is poor technique in his breathing. On the 50 he doesn’t breathe so it isn’t a hindrance but he can’t do that in a 100

He definitely has the endurance for 100 free. His technique for it just isn’t there yet. I.e his breathing is messed up and he kinda overotates and his elbows are rlly low.

I didn’t see you last week criticizing Govorov when he could only swim a 53 something in the 100 fly after a WR in the 50 fly.

Govorov is clearly a guy who can’t do 100s. He’s not a flyer. That’s just sprinting ability. Andrew now has 2 good 100s and his situation with the 100 free is just odd.

I think college will help Whitley’s speed. I heard the announcer say he is now 6’10”. I think my grandma can swim the first 50 faster than him, but he looks so strong on the back half of his races. I am just waiting for him to bust out a 200M breaststroke significantly under 2:10. Trials is going to be rough in the 200M breaststroke (Licon, Cordes, Miller, Prenot, Fink, Wilson, Roy, Kalisz?, Whitley).

Surprised that Schmitty looks so strong. Probably a solid pick for the 4x 200 relay now.

Her and Becca Mann looks to be back at it also. For the relay it is so crowded
Ledecky, Smith, Schmitt, Margalis, Comerford, Maclaughlin, Runge, Manuel, Drabot, Franklin. Thats 10. Tuggle not quite ready only a 2:03 just now.

Smith and Margalis seem like pretty safe picks… and yeah I’d say Schmitt might have the edge for the 4th spot. Looking forward to her race tomorrow. Comerford “should” be in the 1:55 range but it’s been a while and she hasn’t done it. Lots of contenders.

Let’s wait for her 200 free race tomorrow. Her 54.34 at 100 is very good especially if to remember that it came after 400 race where she had 2:02 at first half. That makes me to believe that she will break up with this 1:59 peloton headed by Missy Franklin and will join Marsalis’ group of real contenders for the place in 4×200 relay. I wish her luck with that.

looking forward to see how Justin Ress gets into the Under the 49 Barrier …..

2020 will be nutso. Dressel, Held, Pieroni, Adrian, Andrew, Chadwick, now Ress, maybe Hoffer and Foster. So many more, and just for the US. Now imagine everyone together…

Hoffer? He has not figured out LCM.

they could build up 2 relays with that potential , insane !!!!

The difference in in-season times between Leah Smith and Ariarne Titmus is about 3sec. It is a lot of job to do for Leah.
It interesting if Leah gets tapered for Nationals. From one hand it’s better to do for Pam Pac to be in the best form competing against Titmus. On the other hand she probably wants to secure her place in National team in individual 200 event. And there she faces strong competition. The spot at 800 event is not given neither.

Titmus’ 4:00.9 was done at the Commonwealth games, that’s not in-season.

Titmus went 4:01.7 last week as well. I think that’s the swim Yohzik is referring to.

Titmus said herself she was partially rested last week

But all Leah needs to do at Nats is secure a spot on the PanPac roster then she can enter anything she wants and grab World Champ spots right?

Are you sure that she is allowed to race individual 200 or 800 at PanPac if she isn’t on the podium at Nationals in those events but got on the team somehow else? If she isn’t good at Nationals she won’t get chance to fix the situation at PanPac and therefore will miss 2019 WC in individual events where she wasn’t at least third at Nationals.
Is my understanding of selection process incorrect?