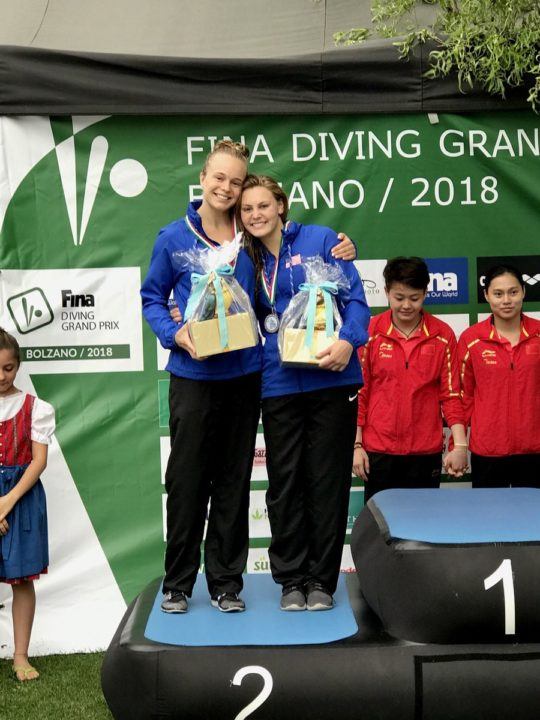 Gibson and Palmer gave Team USA its first Grand Prix medal of the weekend, as the pair scored 268.11 points in Friday’s finals, 30.84 points behind China’s gold medalists Chen Yiwen and Wu Chunting. The duo began competition strong, as they were just 2.40 points behind Yiwen and Chunting at the end of each of the first three rounds. The pair’s strongest dive, a front 2 ½ somersaults with one twist, came in the third round for 65.70 points. Despite a front 3 ½ pike in the fourth round that only resulted in 53.01 points and allowed China to lead by 19.14 points, the pair was able to hold on to second to bring home silver. Russia’s Tatiana Stepanova and Daria Selvanovskaia placed third with 248.40 points.

Herrera will compete in Saturday’s finals in the men’s 3-meter after finishing third in his semifinal. The tournament consists of two semifinals with six divers in each, with the top three divers from each group advancing to the finals. Semifinal groups were comprised by divers ranked by either 12-10-8-6-4-2 or 11-9-7-5-3-1 following the men’s preliminaries. Herrera, who placed fourth in the preliminaries, began the first round in sixth place but climbed his way up to third following a strong front 2 ½ somersaults with two twists in the second round that scored for 76.50 points and an inward 3 ½ tuck brought him 73.50 points. Herrera’s strong inward 1 ½ somersaults with 3 ½ tucks in the final round allowed the diver to clinch third, just 4.3 points behind Great Britain’s Ross Haslam. Italy’s Lorenzo Marsaglia placed first with 404.80 points. Grayson Campbell (Vienna, Va./Austin, Texas), who placed 14th in the preliminaries, qualified for the semifinals because no more than two divers from the same federation may advance. Campbell placed fifth in the semifinals with 366.45 points and eighth overall in the men’s 3-meter.