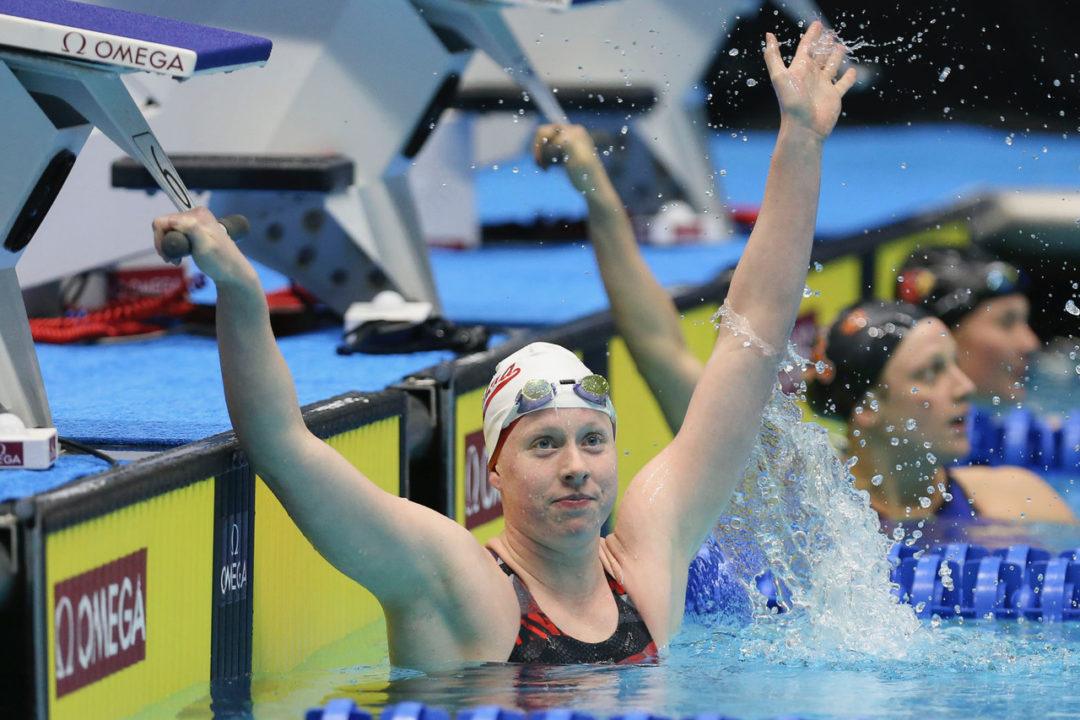 Swimming fans are getting ready to see the big rematch between rivals Lilly King and Yuliya Efimova in the 100 breast at the 2017 FINA World Championships. Archive photo via Tim Binning/TheSwimPictures.com

Swimming fans are getting ready to see the rematch between rivals Lilly King and Yuliya Efimova in the 100 breast at the 2017 FINA World Championships. The rivalry became one of the big storylines of the 2016 Rio Olympic Games when King made it well known that she didn’t approve of Efimova competing despite a recent positive doping test for meldonium. Efimova, who was cleared to compete in Rio following that drug test, went on to win silver in both breaststrokes and placed 2nd behind King in the 100 breast.

A year later, King and Efimova are atop the World Rankings in the 100 breast again. Both have broken 1:05 already this season and are the only women to have done so in 2017 thus far. Efimova leads the way with her 1:04.82 from the Canet stop of the Mare Nostrum tour. That was a new Russian Record for Efimova and made her the 3rd fastest performer ever. King is just a tenth behind this season with a 1:04.95 from U.S. Nationals. After both put up smoking in-season swims, it could come down to who hits their taper better.

Another name to add to the rivalry mix is World Record holder Ruta Meilutyte, who stunned the world to win the 100 breast at the 2012 London Olympics when she was only 15-years old. Meilutyte wasn’t at her best last summer in Rio, finishing 7th in the final with a 1:07.3 while recovering from injury. Her lifetime best of 1:04.35 was done at the 2013 World Championships, and she’ll look to return to the medal stand once again after taking gold in 2013 and silver behind Efimova in 2015. Meilutyte is training with a new coach in Lithuania, Paulius Andrijauskas, and says that she’s found “new motivation.” She hasn’t been 1:07.0 yet this year to prove that she’s recaptured the magic she had training with Jon Rudd, but hasn’t had a reason to rest yet either.

It should take at least a 1:05-mid to make the medal stand, and Olympic bronze medalist Katie Meili is certainly still in the conversation after putting up a 1:05.51 at U.S. Nationals. Sweden’s Jennie Johansson has produced a season best of 1:06.30, and will look to join Meili in the 1:05-range. Johansson has plenty of speed, as she’s the reigning 50 breast world champ.

Update: we’re also including Alia Atkinson, who stormed back into contention over the weekend in Orlando. The Jamaican Olympic finalist was conspicuously absent from the long course scene post-Rio, competing on the World Cup and at Short Course Worlds, but not logging a single long course swim since August 2016 (at least, per USA Swimming’s database). In fact, Atkinson’s only registered swims since December were a pair of 50 yard butterflys at at Florida club meet.

But Atkinson looked in good form at the Orlando Sectional over the weekend, going 1:07.6 in the 100 breast and 30.9 in the 50. She’s typically been a pretty good in-season swimmer, but should be good enough to sneak into the final in Budapest.

DARKHORSE: Ireland’s Mona McSharry has been doing very well this season, taking down an Irish Senior Record in the 50 breast at European Juniors to become the first ever Irish swimmer to win gold at that meet. She swam a personal best 1:07.38 at the Irish Championships in April, and will now go after the Irish Record of 1:07.15. If she can crack the 1:07 barrier, we could see her in the final in Budapest. Regardless, she’s a target for Tokyo – the new man in charge in Ireland is Jon Rudd, who was Ruta Meilutyte‘s old coach.

I’m not American but King is the favorite and I don’t see her losing. She will take take Efimova out of her comfort zone by going out really fast and I just see her as the better racer of the two if it becomes a lane 4 vs 5 battle.

It’s a weird predicament when your best competitor has been in trouble with doping suspensions.

How should you feel if you lose the gold medal to a drug cheat?

Lilly said in an interview that one of the people who contacted her after Rio 2015 was Shirley Babashoff.

The difference in the 1976 cheaters and Efimova is that they didn’t have much choice under the Soviet system. Efimova was living in the US, and her doping was her choice.

really hope Ruta surprises in this one!

Even tho King talks a lot of trash, she has consistently backed it up. I look forward to watching her post race interviews more than the typical fake post race interviews most swimmers give. Besides King, swimmers like Madison Kennedy and Schooling come to mind…its like they’re actually being genuine rather than just saying how much they love everyone and how awesome everyone is…yawn

As much as I dislike King’s attitude, I think FINA is the real villain here. I mean letting a two time drug cheat compete just shouldn’t happen. I wish they would actually value the sport of swimming instead of just the money they make from it

Alia Atkinson of South Florida Aquatic Club is not competing at worlds, she is prepping for the World Cup Series prize money events. Her coach Chris Anderson is coaching the Jamaican national team along with SOFLO swimmer Marc Rojas of the Dominican Republic.