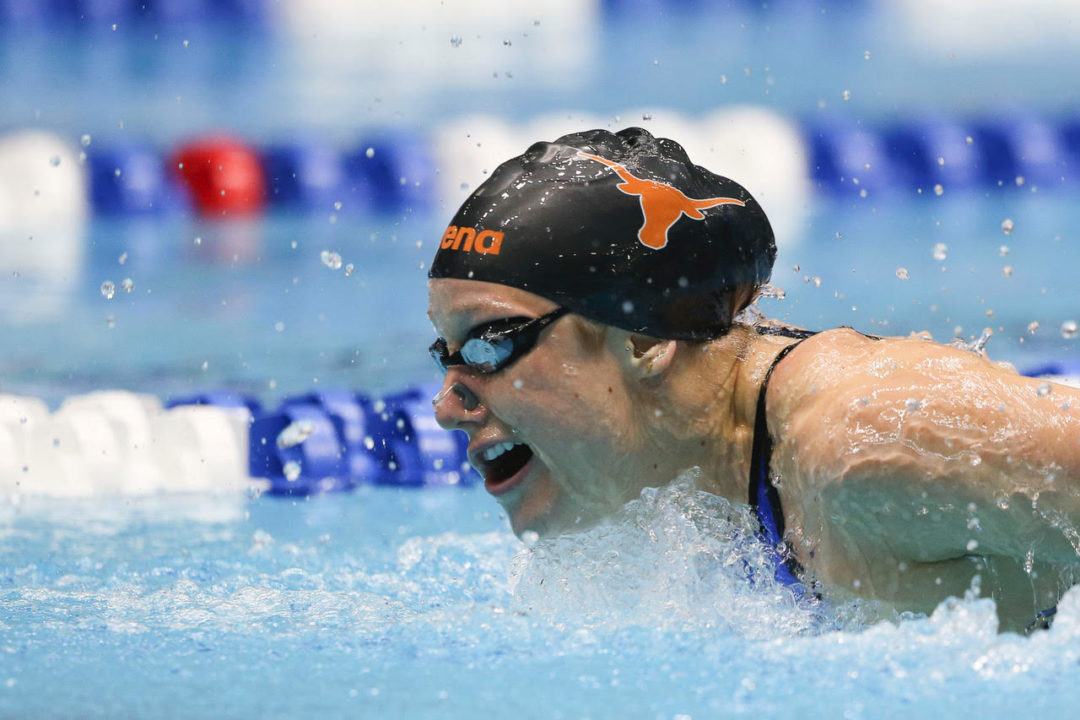 Cox looks ready to blow past her lifetime best 4:38.85, which should be enough to secure her spot on the American team. Archive photo via Tim Binning/TheSwimPictures.com

Last year, familiar names Maya Dirado and Elizabeth Beisel took the top two 400 IM spots at the Olympic Trials, with Dirado going on to win silver in Rio. Of the 8 finalists in Omaha last year, however, retirements and unconfirmed breaks from the sport have pared down returning front-runners to only a couple.

Dirado, Caitlin Leverenz, Sarah Henry, Lindsey Clary*, Kate Mills– the five of them from the final in Omaha have either announced their retirement or have been ghosts in the pool, with no times in the USA Swimming database since last summer. *Clary did swim her senior year with Ohio State and was competitive at the NCAA level, but she has yet to race long course since last summer, which brings lots of questions as to whether she’s having a serious go at Worlds Trials later this month.

Meanwhile, the fastest 400 IMer in long course since last summer has been Katie Ledecky at 4:38.16. Will she swim the event this summer? At the Arena Pro Swim Series in Mesa, she said she’s “mostly just swimming it for training purposes.” It doesn’t seem like she’ll be taking this event seriously, for now. If she were to swim it fully tapered at Worlds Trials, she’d be the favorite to win (4:33, anyone?), but we won’t include her down in the predictions at the bottom.

Bethany Galat and Madisyn Cox, two collegians from the state of Texas, are two returners from that final in Omaha. Galat actually touched third at Trials, with Cox about a second behind in 4th. This spring, Cox’s 4:39.07 is the best-ranked time for Americans behind Ledecky, and it’s less very close to her time from Omaha. She looks ready to destroy her lifetime best 4:38.85, which should be enough to secure her spot on the American team. Cox was only 4:05 at NCAAs in 2016, then smashed her lifetime best for a 4:00.97 to take 3rd at NCAAs in 2017; she looks very dangerous this summer.

Galat, meanwhile, was absolutely on fire during the summer of 2016. In addition to her 3rd in the 400 IM, she was also 3rd in the 200 breast in Omaha, and went on to score 400 IM and 200 breast U.S. Open titles later in the summer. She beat Cox in both of those U.S. Open races, though Cox got her hand ahead first in the 200 IM. Cox, the Texas Longhorn, certainly looks better this spring, as Galat has only been 4:48.33– still, Galat is someone who has huge tapers and comes out of nowhere, and she should be vying for one of the top two spots in Indianapolis.

We thought we’d continue to get ghosted by Beisel, but sure enough, she popped right back up at the Santa Clara Pro Swim Series with a 4:40.00 out of seemingly nowhere. She’s definitely gearing up to make another international roster, and she told SwimSwam that she recently spent a few weeks out in Colorado at a training camp and is getting back into racing with an open mind after taking a nine month break after Rio. It’s going to be incredibly difficult to predict where she’ll land in Indianapolis, but she’s a veteran and a very experienced racer, and she might have enough in her to make another U.S. international team.

Melanie Margalis has the 3rd-fastest time for Americans this spring with a 4:40.47, just a tenth behind Cox. The Saint Petersburg Aquatics IMer didn’t swim this event at Trials, but she’s certainly capable and talented enough to challenge for a spot in this event on the Worlds team. We won’t know if she’s swimming this until psych sheets come out, but she typically focuses on the 200 IM and 200 free along with the breaststrokes, so she’ll be left out of the top 8 predictions.

Stanford’s Ella Eastin and Brooke Forde are next up on the top times list this year. Eastin broke the American record in the 400y IM at 2017 NCAAs, and while she still hasn’t fully developed in long course, her 4:41.19 from April is almost a full second faster than where she was at Trials, and it seems time for her to get past her 4:38.97 lifetime best from when she was 16. Soon-to-be freshman Forde, meanwhile, is a fast-rising IM talent who’s 4:43.64 is the #7 time done by an American thus far in the season.

Meanwhile, Allie Szekely has found another gear after some stagnation, and her SCY improvements in this event suggest more to come in long course for the rising Stanford sophomore. The Cardinal has become somewhat of a 400 IM factory, and Szekely has found a way to take her best time from 2012, before she even took her first high school classes, and decimate it. At the Santa Clara stop of the Pro Swim Series, she took her 4:46.73 best time to a 4:43.72 and then down to a 4:41.10, which ranks her the 5th-fastest American this year. If she can get under 4:40, it’s game on for a renewed Szekely.

Emma Barksdale and Ally McHugh are two names you might not know, but you’d be smart to remember going into Worlds Trials. They’re both rising juniors, Barksdale at South Carolina and McHugh at Penn State, and they finished 13th and 14th, respectively, in the 400y IM at the 2017 Women’s NCAA Champs. Barksdale just went a 4:44.92 in Santa Clara, and McHugh a 4:45.04 in Michigan at the Namesnik Invitational. Barksdale was within tenths of her best time from last year’s Olympic Trials, and McHugh went a best time by more than seven seconds and was faster than her Trials time by over ten seconds.

Dark horse: Kelly Fertel of the Gulliver Swim Club. Fertel came into the University of Florida program last year with a 2015 lifetime best of 4:50.10, and she’s brought it down after a year with Gregg Troy to 4:47.68 in May and then 4:45.93 recently in Santa Clara.

Beisel will make it

I really, really want her to. She swims with a lot of heart, and is a great leader for team USA.

Galatians always brings it when it counts. Don’t know if she’ll be top two, but you can bet that she will swim great.

I kinda thought “Galatians” was a pretty cool family nickname, or a name for her fans!

Interesting, no mention of Brooke Zeiger.

Event in total rebuilding mode in USA. It needs a new versatile star for Tokyo 2020. Let’s say the truth. That’s a weak event in US women’s swimming right now. 4.36 should be enough to qualify. We need a new Katie Hoff, a new Elizabeth Beisel, a new Maya DiRado. I pick Madisyn Cox who has improved a lot in the last 2 years. Then I could have picked Elizabeth Beisel. I like her. But I pick the youth with Brooke Forde. Maybe still a little bit early but we never know. That race is so open. She has no weak stroke. Maybe she targets more world juniors, I don’t know, but I think she has a 4.35 in store… Read more »

I would have a hard time picking against Beisel making the team when she just popped a 4:40 flat on a month and a half of training.

Will any distance freestylers come into play?

I definitely don’t think we should forget about Brooke Zeiger.. she’s been looking good at the Arena Pro meets lately. I wouldn’t count her out for sure