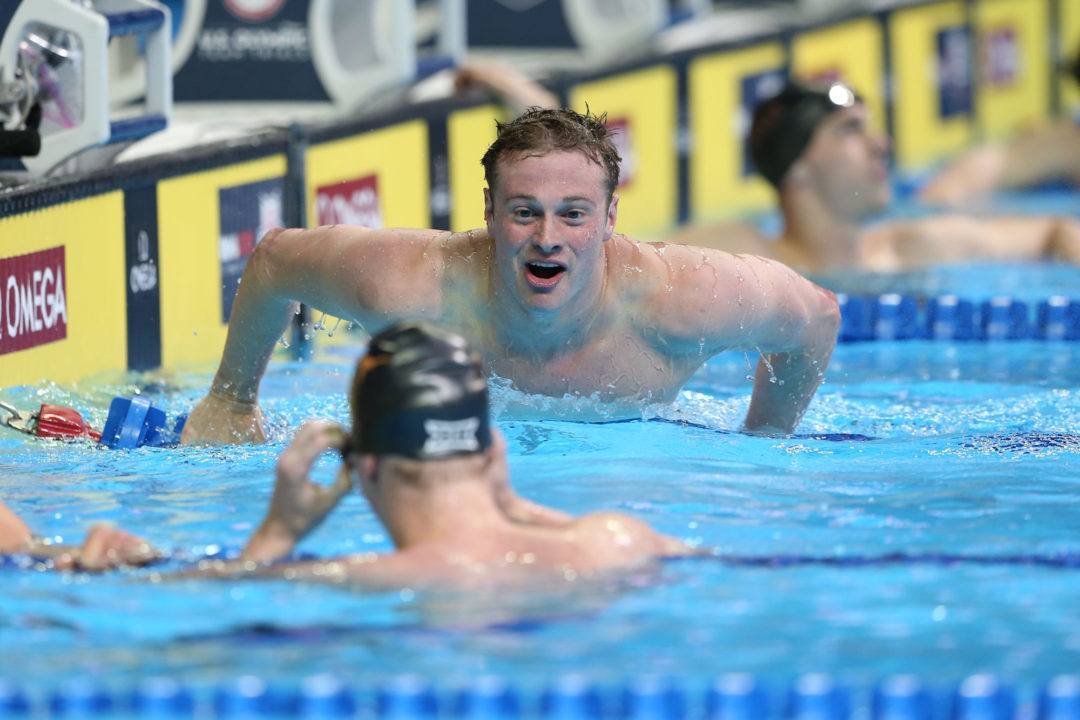 Jack Conger and Townley Haas are looking for individual spots in the 200 free this week in Indianapolis. Archive photo via Lauren Nedeigh

Every generation throws a hero up the pop charts
– Paul Simon, “The Boy in the Bubble”

For the better part of twelve years, Michael Phelps, Ryan Lochte, and Peter Vanderkaay formed the heroic core of the 200 free and 4×200 free relay for Team USA.  Aided primarily by Klete Keller, Ricky Berens, and Conor Dwyer, the US captured gold in the 4×200 in Athens and didn’t relinquish the crown until the 2015 World Championships.

Phelps helped the US recapture gold in Rio last summer, but now he is retired once again, Lochte is suspended, and only two remaining active US swimmers have earned gold medals by swimming in finals on the 4×200.  Yet, there is a new generation of 200 freestylers who appear to be emerging for the US, and this summer figures to be a great indication if they will come close to the legacy laid down in the previous few quads.

The recent explosion of the 200 yard freestyle provides a good deal of hope.  By last March, ten years had passed since Simon Burnett threw down a 1:31.20 to set the US Open in 2006.  Yet, almost out nowhere Texas then-freshman Townley Haas ripped a 1:30.46 at the 2016 NCAA championships, opening up the proverbial pickle jar — six of the ten fastest times ever were swum this February or March as other collegiate swimmers exploited the gap Haas had made.  If even a few of these men can translate their short course yards success into anything close on the long course level, it’ll go a long way to assuring US dominance in the 4×200 free relay at least through this quad.

The aforementioned Haas rolled from the 2016 NCAAs to an upset over Conor Dwyer at the 2016 Olympic Trials, touching out the veteran by 0.01 seconds, 1:45.66 to 1:45.67.  Haas dropped some time in Rio, good enough for 5th in the individual 200 free, but more dramatically threw down the fastest relay split in the field in the 4×200 free finals.

Haas continued his dominance at the 2017 NCAAs, and currently has the top time in the long course 200 free this season, a 1:47.86 from the Texas Senior Circuit meet earlier this month.  From all signs, he appears to right about where he was for Trials, and there’s no reason to think he can’t crack the 1:46 barrier again, and perhaps even be a medal threat individually in Budapest.

Texas teammate Jack Conger had a bit more of a roller coaster summer last year.  He nearly qualified individually for the 200 free, finishing a tenth of a second behind Dwyer, at 1:45.77.  In Rio, he became one of few to swim a 1:45 in the prelims of the 4×200 and then be left off of the finals team, finding himself squeezed out by the veterans Phelps and Lochte.  To cap it off, Conger was then involved in the infamous gas station incident.  However, he seemed to respond to all the controversy by throwing himself back into training, perhaps with something of a chip on his shoulder.

The apparent focus paid off, as he wrapped up his collegiate career by improving his 200 yard free time, leading off the Longhorns’ American Record breaking 800 free relay, and swam the fastest 200 yard fly ever to earn his first individual NCAA win.  As far as the 200 free LCM goes, his 1:48.84 this season sits 4th among US swimmers, and is about six-tenths faster than his time heading into Trials last summer.  Based on all these indications, there’s really no reason to expect Conger or Haas to be substantially slower than they were last summer.

While we expect Conger and Haas to pick up right where they left off last summer, analyzing Conor Dwyer‘s prospects for this summer is a bit more difficult.  The 28 year-old veteran had the fastest time in the US last year (1:45.23), but after his bronze medal in Rio he seemed to take a lot of time off.  He didn’t compete until well into the spring, and his 1:49.47 from the Santa Clara PSS is well off his times heading into Trials last year.  We have to assume he has enough training under belt that he won’t bomb completely, but it seems likely there will be some regression from last year.

There’s a big time gap between the top three and the next group of swimmers, as no one currently competing has a lifetime best between 1:45.8 and 1:47.0.  However, five men entered in this event sport lifetime bests between 1:47.1 and 1:47.3.

Several of those best times were recorded at the 2015 Summer Nationals.  There, between his junior and senior years of high school, Maxime Rooney won a national championship with a 1:47.10, followed by Zane Grothe in 1:47.11, and then Blake Pieroni in 1:47.30.  None were able to match those times at Trials, but Pieroni made it onto the Olympic team as a member of the 4×100 free relay. He seemed to parlay that into increased confidence during the NCAA season, joining Haas and Dylan Carter as the only men to breach the 1:31 mark, and figures to be the best bet to see some substantial improvement in his LCM time.  Grothe does currently have the 3rd-fastest time among US men this season.  Rooney didn’t have a great NCAAs, but with Florida’s focus on LCM swimming, and that good ol’ Gator taper, he should challenge for an A-final spot.

No one, and we mean no one (at least who did the SwimSwam Pick ‘Em contest) predicted that both Clark Smith and Gunnar Bentz would make the USA Olympic Team in the 4×200 freestyle relay.  Yet, they earned the last two spots on that relay with their times from Omaha, both in that 1:47-low range as well.  They also both looked sharp during the college season, and while there are a lot of men who have best times in the same range, it’s pretty rare for a member of a US Olympic relay to not earn a spot on the Worlds team the following year.  Still, there are a lot of other men in right about the same time range, so if either Olympian is a bit off in prelims, they could find themselves out of the A-final.

As up to six men could earn a spot on the Worlds team via this event, we will go a bit deeper into the field that we normally would.  Veteran Michael Weiss swam on the 4×200 relay in Kazan, but given the rise of the youngsters, he has her work cut out for him to make the squad here.  Jonathan Roberts was an Olympic Trials finalist here and has opted to swim this event in Indianapolis instead of the 200 back, which is also a very strong event for him.  Jay Litherland had one of the most impressive doubles all season, winning the 200 free at the Santa Clara PSS with a 1:49.28 minutes after swimming a 4:13.79 in the 400 IM.

Caeleb Dressel appears on the psych sheet as well, and while he’s known primarily for his sprinting chops, it would be foolish to count him out.  He went 1:48 four years ago as a 16 year-old, and if he’s trying to do his best Matt Biondi impression, he’ll need to add the 200 free.  Still, he has a pretty loaded schedule already.  There’s no guarantee he’ll actually swim this, and even he does, he may simply try to throw down a fast enough time in prelims to get him considered for the relay.

We’ll wrap this up by mentioning a few younger swimmers.  College stars Cameron Craig and Dean Farris both engendered lots of chatter after their 1:31s in short course this year, but have a long way to go before their LCM swims get to the same level.

Rising high school senior Drew Kibler knocked out age group records with reckless abandon this past season.  He could very well be part of the future for the US in this event, but he’ll need to take a big chunk of his lifetime best 1:49.04 to earn his way on the Worlds Champs team this year.

Dark Horse: Patrick Callan hasn’t garnered quite the name recognition that Kibler has, but our 6th-ranked recruit in the high school boys class of 2018 has the 6th-fastest time among US men this year.  His 1:49.41 from the Atlanta PSS stop puts him just ahead of Kibler this season, and 17th overall on the psych sheet.

You still have time to update the predictions to include Zach Apple. It’s not too late!

Big names should be terrified!
Jack Walker is entered in that event.

If Reed is on his game he has a fantastic shot

He’s not listed in the psych sheet.

That makes it a lot tougher for him, no doubt.

Regardless of whomever makes the team individually, I’m not really all that confident that the USA picks up a medal at all. Sun, Park, le Clos, Guy, and now Scott, and even maybe Hagino will definitely all have realistic shots at medals. If Conger and Haas go 1-2 at trials, it’s going to take a relatively significant drop to even get on the podium for either of them.

Toss the two Americans in with those 6, and that’s an absolutely loaded potential final. Hopefully we’ll see some huge swims by some huge names.

As far as the US is concerned, I think that as long as Haas and Conger do their thing, they should make it. As much… Read more »

There is no huge standout (even Sun) but lots of talent. Hoping someone or two will step up this week. It should be a great race.

Haas has the talent. He is young and now has experience. This should be his time.

Haas is just ridiculously consistent. Look at his splits between his 2016 and 2017 NCAA 200 frees:

15
0
Reply
ERVINFORTHEWIN
Reply to  JP input is too short

He should be solid on wednesday !!!

If those predictions are right, worlds 4×200 could be a GBR/USA/JPN stormer… Not sure anybody else can hang with those 3 this year…

None. Those 3 will be the medalists.