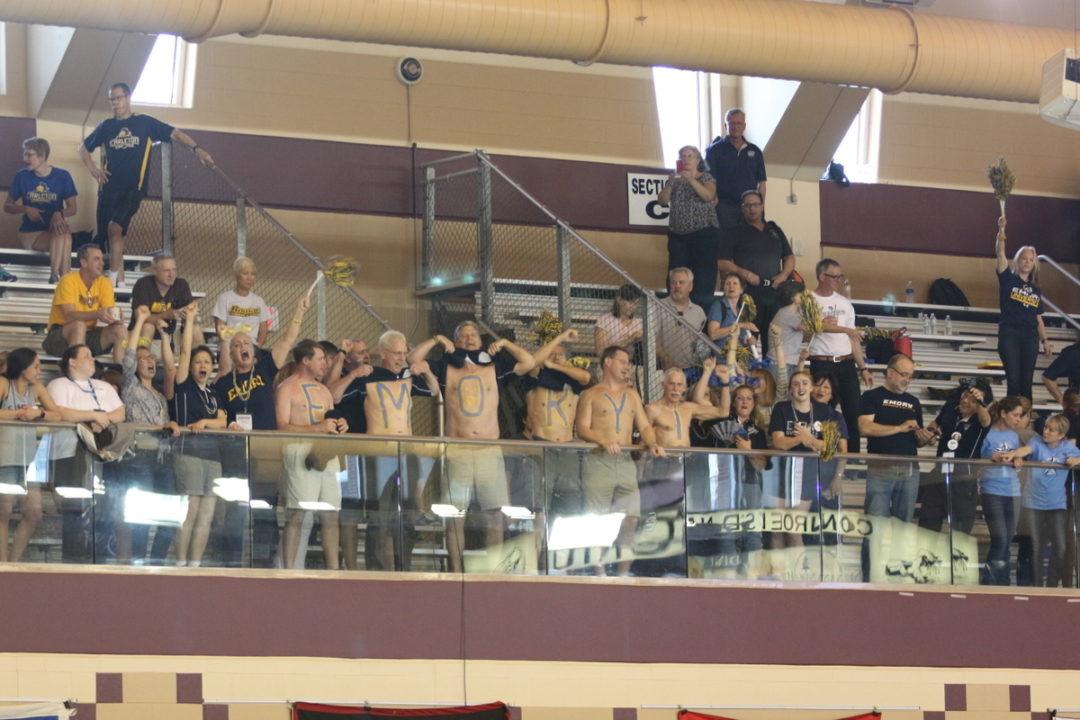 Andrew Wilson tied as the 6th-best performer in history on Saturday night in the 200 breaststroke.

After 13 top-three team finishes at the NCAA Division III Championships, including a third in 2016, the Emory men’s swimming and diving team won its first national title in Shenandoah, Texas, on Saturday. The Eagles were buoyed by Male Swimmer of the Meet, senior Andrew Wilson, who had the Midas touch and then some. Not only did just about every event he touch turn to gold, but with Division III records to boot. Indeed, Wilson contributed individual national titles and their concomitant D3 records in the 200 IM, 100 breast and 200 breast individually, and as part of the 200 medley and 400 medley relays. Emory junior Oliver Smith added a victory in the 50 fly on Wednesday, and anchored the Eagles’ winning 200 free and 400 free relays.

It wasn’t so much that Emory significantly outscored their psych sheet seedings, as much as it was just that they did what was expected of them. The Eagles had their ups and downs throughout the weekend’s events, but as an ensemble they performed well, getting 15 swimmers and 5 relays into A finals, and 4 swimmers into B finals. They also had a bit of luck. 2016 national champions, Denison, had a difficult time hitting their prelims swims, which cost them approximately 61 points and a shot at a repeat title.

Williams had an excellent meet, moving from an anticipated ninth place to seventh in the team standings. Senior Benjamin Lin, like Wilson, won all three of his individual events (100 back, 100 fly, and 200 back). Moreover, he broke the Division III record in the 100 back, and his leadoffs helped Williams score fourth in the 200 medley relay and second in the 400 medley relay. Kenyon did better than expected in a handful of events, including double-scoring relays; the Lords passed their rivals Denison to finish second in the standings.

A handful of teams, including WPI, Chicago, Santa Cruz, NYU, Wash U, Tufts, Carnegie Mellon and Pomona-Pitzer, rose in the standings thanks to a breakout star, or a well-timed relay performance. On the other hand, MIT, Claremont-Mudd-Scripps, and Wisconsin-Eau Claire all had not one, but two, relays disqualified, costing them dearly. Rowan, NYU, and Wisconsin-LaCrosse also suffered relay DQs.

“They also had a bit of luck”? Seriously Anne? As is the case every year, the best team that showed up won the meet. Emory quantitatively swam faster and scored more points. Passively invalidating an incredible performance by chalking it up to ‘luck’ is not appreciated. Never tell an athlete that they do not have ownership over their own success.

Although I agree with you 100%, I just wanted to add that it also isn’t right to chalk up a team’s success to the coaches. The coaches may do a good job but they are not the main reason the swimmers succeeded. These swimmers did it themselves and the coaches helped facilitate it.

Incredibly exciting meet to watch in person but several of the relay DQs were suspect if not wrong. The reaction timing system was malfunctioning causing officials to go to video for subjective reviews. Other videos clearly showed some of the DQs were called inaccurately. It wouldn’t have made a difference in the standings at the top of the leaderboard but very discouraging for several teams nonetheless.

the announcer on the livefeed said that having the “fins” on the blocks was what was causing the relay reaction system to not work properly because some swimmers were beginning their stance on top of the fin where there is no sensor. Big flaw and definitely cost some teams points.

A really great meet to watch, and an exciting turn in the arc of DIII swimming – second only to when Denison broke the Kenyon streak in my opinion. All of these swimmers are being made better by the improved depth and competitiveness in D3. Other teams, MIT in particular I think, will be likely to rise up and challenge in coming years. Compared to where things were in the 2000s – where one team just totally dominated the competition – this is an exciting turn of events to have a much more evenly dispersed field. Better for all competitors, as well as spectators (: