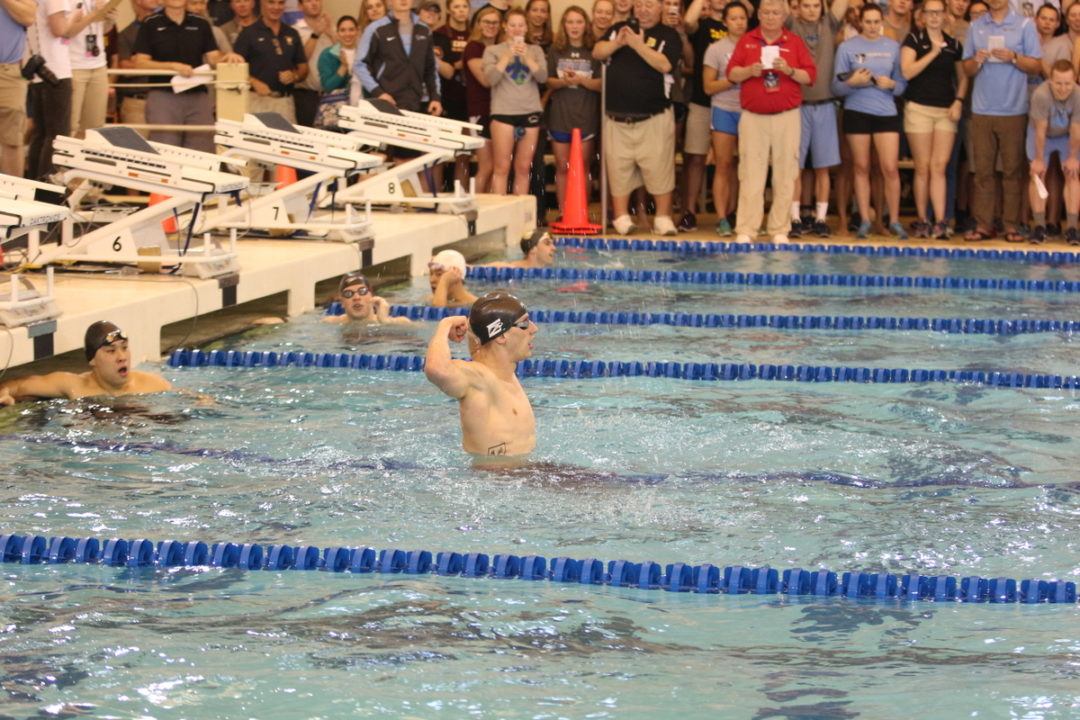 The Collegiate Swim Coaches’ Association of America (CSCAA) handed out its 2017 Division III awards at the conclusion of the national championships. To no one’s surprise, Emory senior Andrew Wilson took home Male Swimmer of the Meet honors. Wilson won three individual events and set Division III national records in each one. On Wednesday he won the 200 IM with 1:44.18, erasing an hours-old meet record, set in prelims by Johns Hopkins senior Evan Holder, and lowering his own D3 national mark. (Incidentally, both Holder and Wilson came in under record time in finals.) He also swam the breaststroke leg on Emory’s record-breaking 200 medley relay. The next day he helped the Eagles take down another relay record: the 400 medley. On Friday he twice lowered his own D3 mark in the 100 breast, finally settling it at 50.94 in finals. On the final day of competition, Wilson won his third individual event, the 200 breast, lowering his own NCAA record to 1:50.80.

Williams junior Emma Waddell earned the Female Swimmer of the Meet honors. She won two national titles and was runner-up in a third, and was part of four top-3 relays, garnering 7 All-America honors in 7 events. Waddell was the 50 free champion on Wednesday with 22.69. She also anchored Williams’ third-place 200 medley relay (22.26). The next day she won the 100 fly with 53.48 and was a key contributor to the Ephs’ runner-up 200 free and 400 medley relays. After a day off on Friday, Waddell swam to a second-place finish in the 100 free and anchored Williams’ 400 free relay (49.11).

Wellesley junior Maura Sticco-Ivins was named Female Diver of the Meet for sweeping the diving events. She won the 1-meter board by 29.65 points and the 3-meter by a mere 6.80. Last year she was runner-up in 3 meter diving and placed 11th in 1-meter. This was the second time Sticco-Ivins earned Diver of the Meet honors; she won in 2015 as well. Her coach, Jack Lewis, was named 2017 CSCAA Women’s Diving Coach of the Year.

Denison senior Max Levy took home his second Male Diver of the Meet designation after winning both diving events for the second time in his career. Levy breezed through the 1-meter board, winning the event by 41.95 points. It took a clutch dive at the end of the 3-meter event to claim his second national title of the 2017 meet, though, but Levy came through. He finished with 588.20 points, passing second-place Connor Brission of NYU by 10.70 points. Levy swept the boards in 2015, too, the other year in which he was named Diver of the Meet. Levy’s coach, Denison head coach Russ Bertram, earned the 2017 Men’s Diving Coach of the Year award.

The photo above is of Oliver Smith and not Andrew Wilson….both are great swimmers but thought you might like to know….go Eagles!!!!