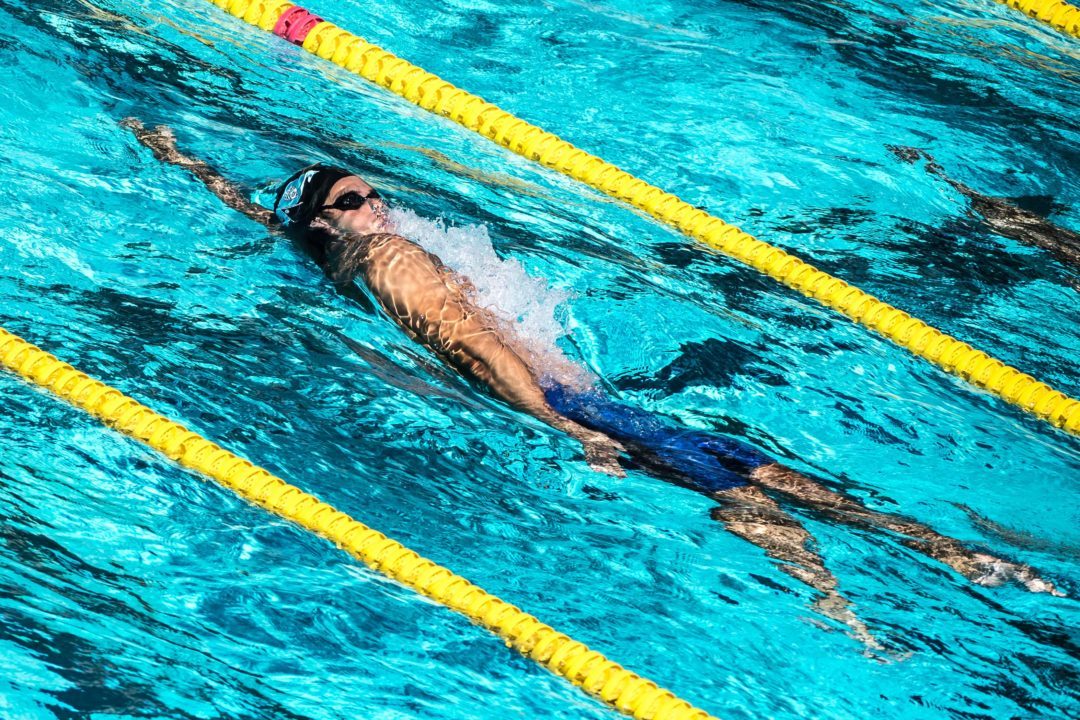 Missed out on our live recaps of the 2017 College Challenge? Fear not, for we've dug through results to put together a rapid-fire 'highlight reel' of top swims and swimmers from the meet, along with a quick look at what makes these swims significant. Archive photo via Mike Lewis/Ola Vista Photography

Missed out on our live recaps of the 2017 College Challenge (or “College Challange,”, as it was ironically named in Meet Mobile results)? Fear not, for we’ve dug through results to put together a rapid-fire ‘highlight reel’ of top swims and swimmers from the meet, along with a quick look at what makes these swims significant.

Want the full ‘highlight reel’ experience? Read these in Terry Bradshaw’s voice. Trust me, you won’t be disappointed.

We were high on Glinta preseason, and he’s already proving us right. The Romanian youth star won the 100 back in 45.97, beating Olympic champs Matt Grevers and Ryan Murphy, plus went 1:40.50 to take second in the 200 back. An accomplished long course swimmer, Glinta is wasting no time in converting his speed to the proverbial ‘bathtub’, and could give USC the tools for a deadly medley.

Formerly the owner of the fastest 50 breast split in history, we thought Hannis had given up that title permanently with little chance to swim a short course yard relay as a pro. But she went 25.51 on the mixed 200 medley relay – typically, mixed relay splits don’t count for official records, but her time does surpass the 25.55 put up by Lilly King last winter. Hannis also went 57.69 to win the 100 breast, showing she might have a resurgent summer on the way after making the Rio Olympics but missing the 2017 World Championships team.

Present vs Future In Women’s Backstroke

Coming off of Olympic and World Champs silver, Kathleen Baker has solidified herself as the current American backstroke queen. She showed down with perhaps the future of American backstroke in high schooler Regan Smith. Baker was 1:50.62 to beat Smith’s 1:51.30 in the 200 back, but the two swims were among the better in-season swims in history. Baker also went 50.62 to Smith’s 51.30 in the 100 back. For Baker, that could signal a run at Ally Howe‘s American record, and for Smith it suggests the 15-year-old could challenge sub-50 by the time she graduates high school.

Ella Eastin‘s 4:00.02 was a stellar 400 IM swim for mid-October. Freshman teammate Brooke Forde was almost as impressive, going 4:02.02. That duo could go 1-2 at NCAAs if all goes right, and with Ledecky kicking around a 400 IM entry, Stanford could be historically loaded in this event. Eastin also tied defending NCAA champ Baker in the 200 IM (1:53.24), suggesting we could see a big showdown come March.

With Murphy graduated, it’s time for blue-chip prospect Andrew Seliskar to step into the spotlight for Cal. He was 3:43.11 to win a tough 400 IM race with Cal alum Josh Prenot, proving that he’s back at full strength after a summer out of competition.

American record-holder Abbey Weitzeil didn’t have the best freshman year for Cal, but won the 50 free this weekend with a 21.63, just .05 off what she went in the NCAA final last year. Weitzeil also split a wicked 21.2 on the mixed medley relay.

The past two summers have ended in disappointment for Nic Fink, the odd man out in a deep American breaststroke crew. He missed the 2016 Olympic team and only made the U.S. World Champs team in the 200 last year. But Fink won the 100 breast (52.10) and took second in the 200 breast (1:54.65) over the weekend, topping Olympic medalist Cody Miller.

No sophomore slump for Craig

Arizona State’s Cameron Craig was one of the nation’s top freshmen a year ago, and he looked great in tough free fields this weekend. Most impressive was a field-best 41.9 split on the end of the 400 free relay, but he also had a solid 1:34.6 split on the 800 free relay – impressive considering coach Bob Bowman probably has the Sun Devils fairly beat up training-wise at this point in the season.

When I saw “highlight reel” I thought there were videos 🙁

Also, I would add Tom Shields! Everyone is at their own stage in training, but Shields outperformed everyone, including his Cal pro teammates. There’s something to be said for just getting your hand on the wall first, and Shields did it in two events he hasn’t really swum in 5 years.

I thought there would be videos too. A little disappointed

Didn’t Weitzeil have a real good split on the opening medley relay, too?