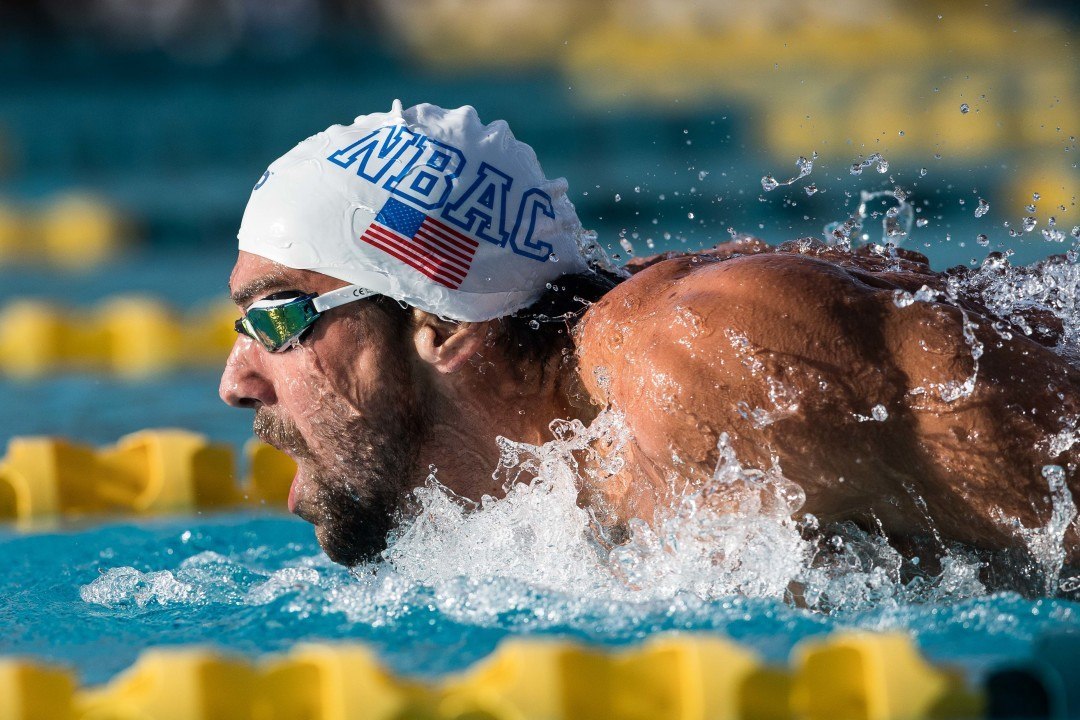 Michael Phelps will be going against a strong field that includes his training partners Chase Kalisz and David Nolan, among others, in the final of the 200 IM at the Mesa stop of the Arena Pro Series. Current photo via Mike Lewis/Ola Vista Photography

Tonight, it was DiRado who pulled off the double, leading from almost beginning to end and taking the win in 2:08.61

Ledecky: I’m excited to swim fast at the end of June (Video)

The 2016 Arena Pro Series stop at Mesa wraps up this evening with the 200 IM, 200 Back, 100 Free, and the fastest heats of the 800 Free (women) and 1500 Free (men).  Katinka Hosszu had the morning’s fastest time in the 200 IM, and she’ll be looking to hold off a strong USA college contigent, include NCAA championships star Ella Eastin.  The men’s 200 IM will feature a battle between Michael Phelps and his training partner Chase Kalisz; Ryan Lochte scratched the final.  Hosszu is also the top seed for the 200 back, while on the men’s side Lochte will swim in lane 4 after top-seeded Sean Lehane scratched.  The women’s 100 free looks like a preview of the A-final at the upcoming Olympic Trials, with Simone Manuel in lane 4 surrounded by a lot of sprint veterans.  Nathan Adrian threw down a 48.06 this morning, just off his season-best 48.05 from the Orlando Pro Series.  If Adrian can drop as little as a tenth of a second this evening, that’d give him the 2nd-fastest time in the world this year, behind Australia’s Cam McEvoy.  Adrian currently is tied for 7th-fastest in the world this year, with six men sitting between 47.97 and 46.05.

Only a few minutes separated two very different races, as this one was as close as the 800 was not.  Katinka Hosszu was in the lead after the fly leg, only to surender it briefly to Maya DiRado after the backstroke leg, then regain after breaststroker.  But DiRado outsplit Hosszu 30.23 to 31.80 over the final 50, during which it looked like any of four or five women could win the race, and DiRado took the win in 2:11.09.  Ella Eastin was in 2nd or 3rd the whole race, and touched just behind DiRado in 2:11.35.

Michael Phelps led a NBAC sweep of the top three spots.  Phelps led wall-to-wall, holding off teammates David Nolan and Chase Kalisz.  Nolan was in 2nd place at the halfway mark, but Kalisz passed him on the breast leg and began to inch closer to Phelps, splitting 33.65 to Phelps’s 34.05.  It looked like Phelps may have intentionally pushed the breaststroke a little hard, as Kalisz continued to close during the final 50, but Phelps had more than enough of a lead and touched in 1:57.90 to Kalisz’s 1:59.05.  That’s not too far off the 1:57.60 Phelps swam in December, which remains the 3rd-fastest time in the world this year.  Nolan placed 3rd in 2:00.89.

We’ve gotten so used to seeing Hosszu swim faster at seemingly every meet, and often win multiple events in the same session, so it’s a bit unusual to not only see Hosszu not win either event in an evening, but to see her lose both events to the same swimmer.  Yet, tonight, it was DiRado who pulled off the double, leading from almost beginning to end and taking the win in 2:08.61.

It was Hosszu who was out first at the 50, with a 30.59, but DiRado was right being at 30.68, and quickly took the lead over the next length.  Hosszu stayed in 2nd place through the halfway point, but Kaitlyn Harty and Kirsty Coventry moved ahead over the third length, hitting the final turn almost simultaneously.  Coventry out split Harty over that final length to take 2nd in 2:10.04 to Harty’s 2:10.23.

After dropping the 200 IM final, Ryan Lochte swam 0.27 seconds faster than his prelim time from this morning to win the 200 back in 2:01.04.  While Lochte isn’t known for being fast in-season, it is a bit rough watching the former world record holder not being able to crack 2:00.  The next three swimmers finished in order of their post-scratches placings from this morning.  Omar Pinzon stayed close to Lochte the whole way, touching just behind in 2:01.65.  Connor Green took 3rd in 2:02.03, followed by Bryce Mefford in 2:03.20.

Again, the top three seeds reprised their placings from this morning.  Simone Manuel knocked .13 off her time from this morning to take the win in 53.80.  That’s Manuel’s best time this season by a little over a tenth of a second.  The only two USA women who have been faster this season were also in the heat.  One of them, Abbey Weitzeil, turned just ahead of Manuel, but Manuel ran her down in the middle of the pool, and while it looked like Weitzeil may have closed the gap some toward the end, it wasn’t enough, and she settled for 2nd in 54.22.  Veteran Dana Vollmer took 3rd in 54.54 after going under 57 in the 100 fly last night.

Nathan Adrian quickly opened up a commanding lead on the rest of the field and was 22.79 to his feet.  He said in the post-race interview that he may have been a little fast, but his 25.21 backhalf was still good enough for an in-season 48.00, which puts him 5th in the world this year.

No one else was anywhere near the reigning Olympic gold medalist.  Christian Quintero was the next-closest competitor, at almost a second and a half behind Adrian, taking 2nd in 49.45.  USA teammates Jimmy Feigen and Conor Dwyer took the next two spots, which Feigen touching in 49.80 for 3rd and Dwyer in 49.89 for 4th.

Matias Koski and Michael Chadwick were the only other two men close to going under 50.0, but both came up just short. Koski went 50.04, with Chadwick going 50.12 after being 49-high this morning.  Daniel Ramirez took 7th in 50.43.  Ryan Lochte was almost a second slower than his time this morning, albeit quite understandably so after just swimming the 200 back final, and finished 8th in 50.69.

Jordan Wilimovsky did his best Katie Ledecky impression tonight, leading the final heat from the get-go, building his lead throughout the race, and winning by over 18 seconds against some very accomplished swimmers.  His time of 14:53.13 ranks him 5th in the world this year.

Michael McBroom is currently the 3rd-fastest US swimmer in this event this year, behind Wilimovsky and Connor Jaeger, and he took 2nd in 15:11.62, not a bad time for this point in the season.  Olympic gold medalist Ous Mellouli placed 3rd in 15:16.82.

Clark Smith had the fastest time from the early heats, and his 15:19.08 held up for 4th place.  According to the USA Swimming database, that’s first 1500m since the age of 15 for Smith, whose showed some dazzling times in the short course distance events, including an American Record in the 1000 yard freestyle.

Marecelo Acosta took 5th overall swimming out of the final heat, where he held off Taylor Abbott, who steadily gained on Acosta over the second half of the race, but could not quite overcome Acosta’s lead.  Acosta ended up touching in 15:27.39, Abbott in 15:28.60.  Christopher Yeager, also in the final heat, placed 7th with a time of 15:34.80.  Chris Wiser‘s time of 15:38.16 from earlier in the day gave him 8th overall.

I do not understand why Wilimovsky’s performance should be viewed as evidence of Meldonium withdrawl.

Did anyone look at Clark Smith’s splits? It seemed as if he was doing one 50 fast one not so fast.
29-32 for example. Does anyone know why he did that?

Women’s 200 back
Maya DiRado on fire. Her backstroke is beautiful. 2.08 just after a 200 IM, that’s Hosszu-like version 2015.
She’s in her greatest shape ever.
She will qualify in that event with Missy Franklin and why not win a medal in Rio.
Nice week for Kaitlin Harty with 2 best times in the 100 and 200 back. I see her make a top 5 in Omaha in the 200.

Men’s 200 back
The worst event of the week in terms of performances. Only the men’s 200 breast can compete. 🙂

Women’s 100 free
Disappointing final as usual with US female sprinters except Simone Manuel’s time. 50 free times were helped by the… Read more »

Men’s 200 IM
Very pleased with MP time. 1.57.90 is one of his fastest in-season times ever.
His breaststroke looked amazing.
His last 50 were again not very good but it will come as usual with taper. However I would like to see him with a little bit more arm frequency and see him much more aggressive on freestyle. His stroke is efficient but it looks like he sleeps on and does the minimum. But I’m not gonna give lessons to the greatest.

Keep in mind that Phelps always leads off the 4×100 free historically, so I’d say a 47 very high would be a great flat time for him to shoot for if that remains the case.

Women’s 200 IM
Maya DiRado is probably right now the sharpest and most confident US female swimmer with KL and Lilly King.
She’s on track for a great summer.
Probably the last summer of her career. 😥
I see her take the silver or the bronze in the 200 IM.
And take the silver in the 400 IM with a new American record under 4.30 very close to Hosszu. And if the Hungarian has some weaknesses in the final, she will take her chance.
Not surprising but big new PB for Ella Eastin in 2.11.35. No reason she doesn’t break 2.10 at trials to take the second spot as Leverenz looks not very well.