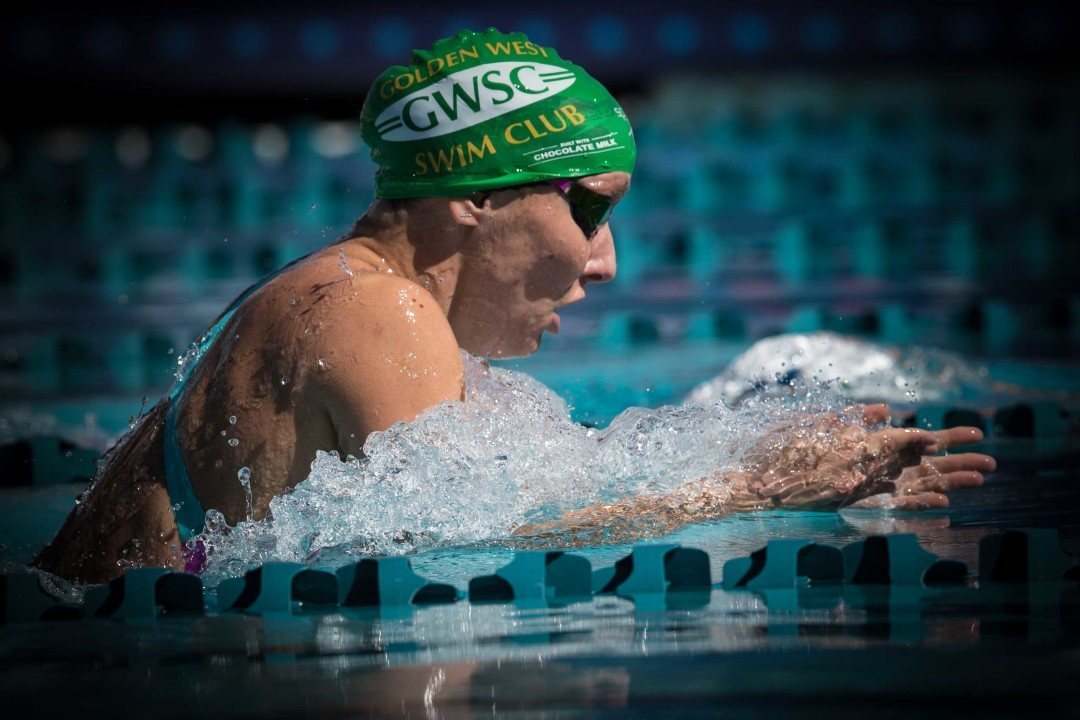 Hardy posted the following message on her Instagram on Monday morning in California:

“Made some improvements & had a blast in Mesa, but disappointed my meet had to end early! I obtained a concussion during a collision on a warm up dive on Fri night & have been recovering as best as possible since. Thanks for all the notes of support, I sure am blessed with some amazing people in life to support me!”

Hardy, who this season has changed training grounds to the Golden West Swim Club to work with former USA Swimming National Team Director Mark Schubert, swam three races prior the warmup incident cutting her meet short. She swam 1:07.09 for 4th-place in the 100 breaststroke final on Thursday and was seeded 12th heading into finals of the 50 free on Friday with a morning swim of 25.79.

Hardy was listed as a “medical scratch” from the B-Final, which left an open lane in the heat.

The 50 free time for Hardy was her best in the 2016 calendar year and second-best of the season, and her prelims (1:07.44) and finals times in the 100 breaststroke were her two fastest of this season.

Instead, lets hope for a quick recovery, and a renewed focus on why it’s dangerous to dive into a warmup lane.

Anyway , 2 other super breastrokers are on the rise in Usa – hardy has a very slim chance to make the team . Trials will show that

I read that Jessica passed a concussion test. Good that was a Made in America concussion, and not one imported from China.

“It’s over if everyone stop bitching about ALL swimmer who has tested positive in the past.” –Agree

Jessica Hardy is a disgrace, just like Efimova . Apparently because J is an American, all can be forgiven.

The fact that she implies supplements made in other country is such a shameless act.

Hardy is a cheater. She robbed Tara Kirk of a spot on the Olympic team, robbed Megan Jendrick of a first place (just making the Olympic team isn’t as good as getting the publicity from WINNING the event to make the team), and there’s supposed to be a STRICT LIABILITY POLICY in place. Gross that she can still swim

She probably moved there knowing they are a distance group, maybe it’ll help her back half of her 100s.

If that’s true, someone wasn’t doing their job. Either she dove in when it should have been feet first entry, or someone was going the wrong way in a one way sprint lane, and in either case, the coach or meet Marshall should have been paying closer attention.

Apparently everyone on this thread is more concerned about Jessica’s prior positive test and suspension than how she got the concussion. I was wondering the exact same thing about how she got the concussion in the first place. The Mesa pool is much more shallow than other pools. I guess she could have been sprinting and someone was swimming the wrong way and they collided. If she was diving into the pool instead of jumping, that’s ridiculous on her part. Unfortunately, meet marshalls can’t do anything once an athlete has entered the pool and another at the other end of the pool decides to flip and come back. And with the number of athletes attending the meet, even diving into… Read more »

If she wants to go to Rio she needs to be at 200% at trials because Lilly King and Katie Meili are on fire and will swim very fast there.

You can be 200% only if you are taking PEDs, otherwise, only 100% is possible. What are you implying? Love.

Truthfully, with as many kids are in lanes together during warm ups (and even some practices) I’m suprised this doesn’t happen more often. My son hasn’t had a concussion from swimming yet, but his coach has sent him twice to be checked. Once when he was just learning to circle swim backstroke and ran head to head with another kid (who did have a concussion…apparently my kids head is harder) and once after a turn when a kid hit him and knocked him into the wall. I cant watch too close…there have been lots more near misses!