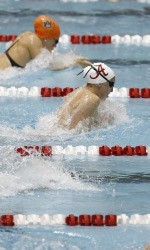 Kaylin Burchell (Alabama, above) comes in with a lifetime best along with a conference title in one of the deepest and fastest conferences in the nation in hopes for a NCAA title. Archive photo via Amelia J. Brackin

The 100 breaststroke is looking like a pretty tight event of late, but with the graduation of top talent like Kasey Carlson, Emily McClellan, and Breeja Larson, the clear top returner from last year’s championships might appear to be Notre Dame’s Emma Reaney.

The senior stole the show in the 200 breast at last year’s NCAA champs, setting new American, NCAA, and U.S. Open records with her time of 2:04.06, blowing right by 2012 Olympian Breeja Larson en route to her NCAA title. She was third in the 100, touching at 57.79, not far off of Larson’s 57.23 which set new American, NCAA, and U.S. Open marks as well. This year, Reaney swam breaststroke on the American-record setting 200 medley relay at this past December’s FINA Short Course World Championships in Qatar, adding a 6th place finish in the 50m breast.

It hasn’t been a stellar yards season for the senior, though, as Notre Dame’s women’s head coach Brian Barnes left the program in September to be with his two children after his wife’s recent passing. In an interview with Reaney after ACC’s, she didn’t seem too confident about the 100 breast, and is still getting used to training under a new coach. Notre Dame has a small team, and Reaney was slower at this year’s ACC championships. This isn’t to say that she WON’T win the event, but she lacks the momentum and success this year to pin her as the clear-cut favorite.

Perhaps the hottest swimmer coming into NCAAs is Alabama’s Kaylin Burchell. The senior posted a lifetime best of 58.48 at the SEC Championships very recently, which is almost a full second faster than what she went at 2014 NCAA’s, where she placed 7th. She was tied for 39th just two years ago, and now has positioned herself for a possible NCAA title. Coming in with the confidence of the SEC title behind her, though, including a head-to-head win over Hannis, is big for a program that’s looking to make top-tier noise.

Burchell, however, is not the top seed. Just ahead of her is fellow senior and SEC breaststroker Molly Hannis of Tennessee, who goes into NCAA’s on top with a time of 58.42. While Burchell’s performance at SECs resulted in a best time, Hannis’ mid-season 58.42 just edges the ‘Bama star for the fastest time in the nation so far. Hannis’ best time is a 58.22, from back in 2013, but she has been under 59 plenty of times since then. These two are in great position to fight for the title, one which neither have won. They met in the A final last year, as Hannis edged Burchell for 7th,  but this year they likely will be fighting for the crown.

Gretchen Jaques (Texas) and Laura Simon (Virginia) are two other sub-59-ers that will certainly be in the mix. Jaques hit a personal best at the Big 12 championships this year (58.71) and Simon’s seed time of 58.97 is just one hundredth off of her best. Simon was in a similar position last year, finishing in a 58.96 at ACC’s, but then falling to a 1:00.29 at NCAAs. Time will tell if she’ll be able to put forth another big swim after her dominating ACC performance this year.

Not to be forgotten are the Stanford breaststrokers. Sarah Haase comes in with the top seed of all three with a 58.61, and freshman Heidi Poppe is next with a lifetime best of 59.21 from the Art Adamson Invitational. Senior Katie Olsen, who was a 58.70 at last year’s championships, has yet to break a minute this season, which is somewhat troubling, seeing as she was entered with a 59.17 last year. Nonetheless, it’s certainly not out of the question that we might see three Cardinal breaststrokers in the A final of this event.

Other names to watch out for include (but are definitely NOT limited to):

Dark Horse: Katie Olsen, Stanford. She’s a part of a Stanford crew that has had plenty of success this year, although her performances this year have not been as tenacious as we’ve seen her, as she’s only put up the 30th fastest time in the country so far. Remember, her best time is a 58.70, so if she shows up at NCAAs, there’s little doubt that she will make the top 8.

This is a potentially huge event for Stanford though… no big time scorers here from Cal or Georgia, and with three potential A finalists this could turn the meet.

Cal really needs Garcia to figure it out here.

Battle of the illegal breaststrokes

Burchell won the 100 breaststroke at SECs, not Hannis