Maritza McClendon: "A tear instantly came to my eyes, I couldn’t believe it… This is a true moment in history for minorities. I still can’t believe we had three women of color take 1,2, 3 in the 100 free at Division 1 NCAA Swimming and Diving Championships." Current photo via Tim Binning/TheSwimPictures.com

In 2002, Maritza became the first African American to break an American record in swimming.

In 2004, Maritza became the first African American to earn a place on the U.S. Olympic Swim Team, where she won a silver medal on the 4×100 freestyle relay.

Am I dreaming? Nope and this is why.

I woke up bright and early Sunday morning, (Yes I still wake up at the crack of dawn because I spent 20 years of life waking up for 5am practice) the house was quiet as my husband and the kids were fast asleep. I made my coffee, picked up my iPad, sat down on the couch and started the Thursday episode of Grey’s Anatomy. Then I proceeded to check the results of the 2015 Women’s D1 NCAA championships. Event by event I checked the times thinking man these girls were fast. I skipped over the women’s 100 free because I knew Simone was going to break another American record and wanted to save the best for last. After each event, I thought these girls just keep getting faster and faster. Then I get to the women’s 400 free relay and see that Simone anchored in an astonishing :45.79.

Instant flashback moment: I remember at 2002 NCAA championships when I anchored in a :46.7, and people thought “A woman under :47 seconds? That’s smoking!” I remember that NCAA’s quite well. It was at the Lee and Joe Jamail Texas Pool, home to the Texas Longhorns. The UGA parents were in the stands with our school headshots blown up, rather largely, and stuck onto a giant popsicle stick. Jack Bauerle did his usual pacing of the pool deck, excessively chewing his gum, and from time to time looking at his stop watch, that wasn’t even clocking anyone. While we didn’t win an NCAA title, that was an NCAA’s I will never forget. Oh wait, I remember all my NCAA’s quite vividly. That’s just how impactful college swimming is. Those were the best years of my life.

Back to reality- I thought, wow, if she went that fast on the relay, I can only imagine what she did in the individual race. And boy was I right. Simone won the 100 free in :46.09…. :46.09! Now that- is smoking! Then I continued to read and saw Lia Neal was 2nd with a :47.13. Instantly thought it was super cool to see two black girls top two. I then noticed it was a tight race for 2nd and 3rd, with the 3rd place finisher clocking in at :47.19. I scrolled over to see it was Natalie Hinds. I had to refresh my page and make sure I was reading it correctly. Three black women just swept the 2015 Women’s D1 NCAA Championship.

My jaw dropped and a tear instantly came to my eyes, I couldn’t believe it. I have to admit I went from being amazed and proud of their accomplishments to a bit sad I wasn’t able to see this moment live. This is a true moment in history for minorities. I still can’t believe we had three women of color take 1,2, 3 in the 100 free at Division 1 NCAA Swimming and Diving Championships. 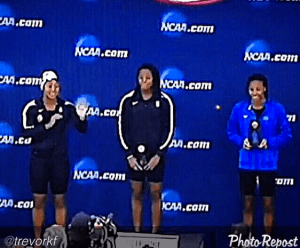 Image is courtesy of Trevor Freeland, UVA alum, NCAA DI Swimmer from the 1980s, among the first African American All-Americans in swimming.

13 years ago I stood on the podium in Austin, TX breaking American records, winning NCAA individual titles and winning relay titles while representing the University of Georgia. The icing on the cake was making history as the first African American to break an individual American Record in swimming in both the 50 free (21.69) and the 100 free (:47.10). Two years later I became the 1st African American woman to make the US Olympic team and medal. I will always remember my first interview at Olympic trials when asked how I felt about being a role model for minorities. My answer, “I’m honored to be the first, but I don’t want to be the last.” What these three ladies have done, is not only made leaps in their personal careers, but have continued on the path that was set many years ago and taken it to unthinkable heights.

It’s truly a proud moment to be able to see the changes in how many minorities are reaching high levels in swimming. Since winning my Olympic silver medal in 2004, I always kept an eye out for who was “new” to the pool deck. From watching Byron Davis, Sabir Muhammad, Michael Norment, Atiba Wade, Neka Mabry, and Allison Terry. To being on the same teams with Tanica Jameson, Kelley Robins, Cullen Jones, and Brielle White. To now watching Dax Hill, Giles Smith, Arianna Vanderpool Wallace, Alia Atkinson, Simone Manuel, Lia Neal, and Natalie Hinds continuing to break barriers and bringing light to the fact that Black people can swim… and we do it well.

I spent many years giving back to the community, striving to reach out to our youth, sharing my inspirational life story, only wishing for this moment. I can only sit back with a huge grin on my face and say, “Wow, look at us now.” 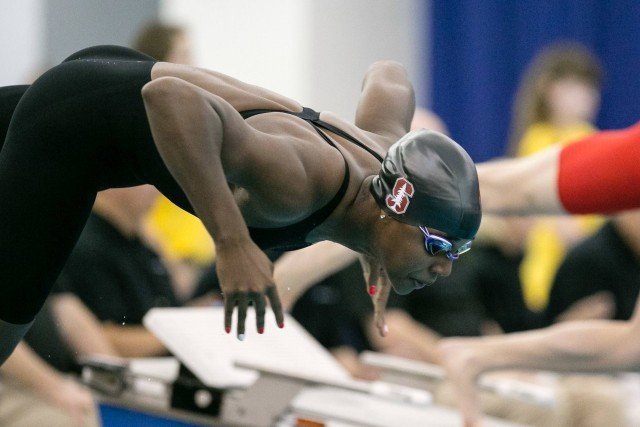 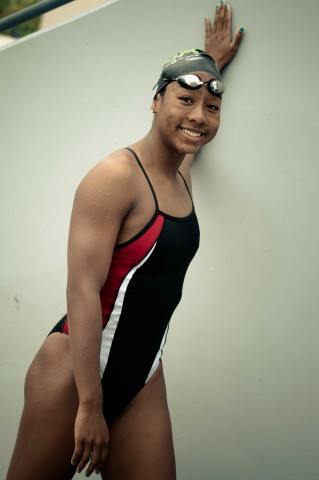 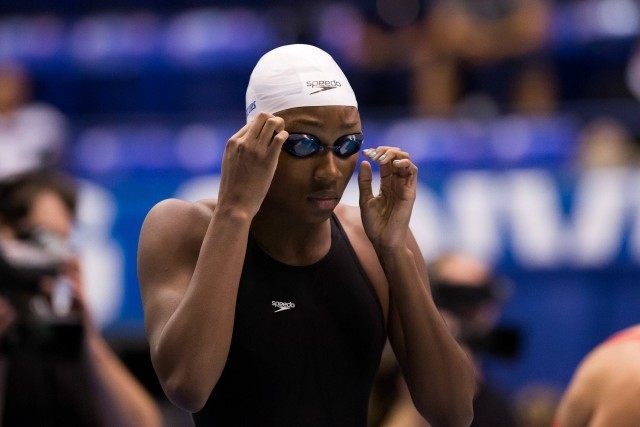 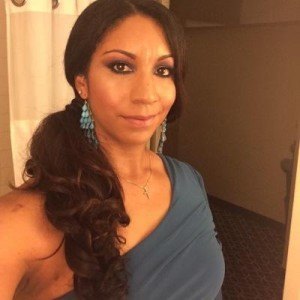 Many thanks to Maritza McClendon for sharing her thoughts.

Great article and great news!! I wasn’t able to find a podium shot of Manuel, Neal, and Hinds together, which is a shame. Each of these girls are inspiring for anyone, but the sight of the three of them together must be a huge inspiration to budding minority swimmers!

Thanks so much Maritza for giving back to the sport and for showing young African-American everywhere that swimming isn’t a sport of color but of dedication and commitment. Thanks for paving the way and I, for one, am overjoyed to see these three women thrive. Woo hoo! It was a great day for swimming!