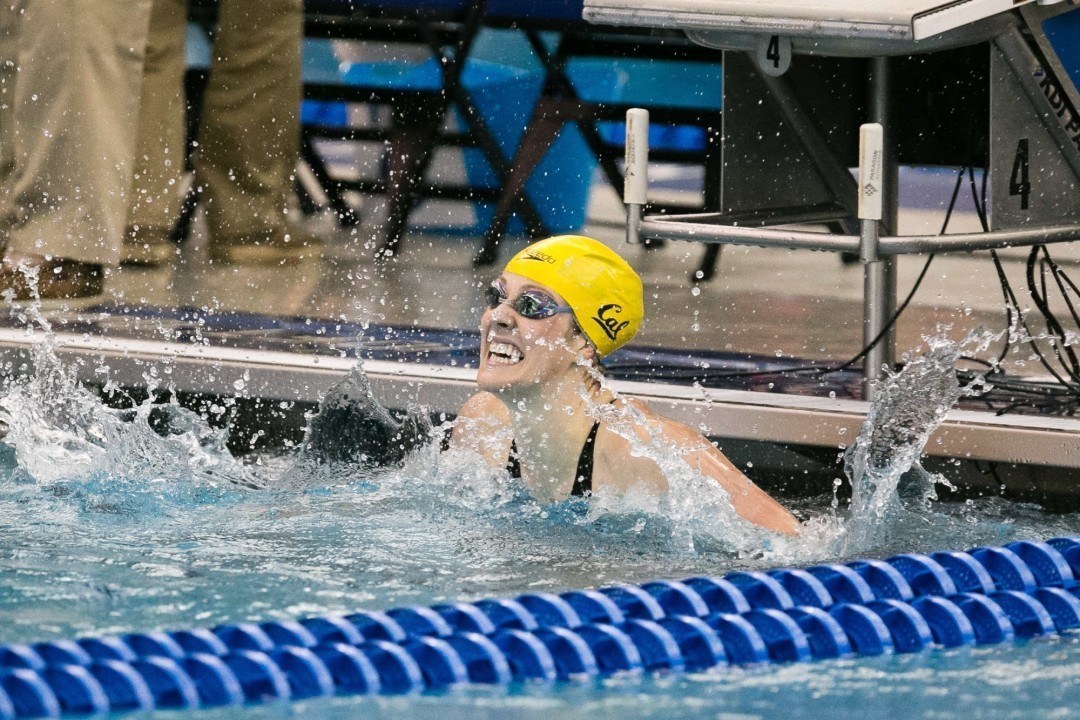 Three individual American records were broken, and plenty of other historic marks were set at the Greensboro Aquatic Centre. Due to the historic nature of these championships, we're counting down some of the swims we think will be remembered for a long time. Current photo via Tim Binning/TheSwimPictures.com

This past weekend the women’s 2015 Division 1 NCAA Championships were contested in Greensboro, North Carolina and gave way to one of the fastest collegiate meets in years. Three individual American records were broken, and plenty of other historic marks were set at the Greensboro Aquatic Centre. Due to the historic nature of these championships, we’re counting down some of the swims we think will be remembered for a long time.

There haven’t been many African-American swimmers who have had the opportunity to represent the United States internationally. In 2000, Anthony Ervin became the first swimmer of African-American descent to medal in swimming.

Cullen Jones is the only other swimmer of African-American descent to hold a world record, and only the third ever to make a US Olympic swimming team.

At the 2015 women’s NCAA Championships, a huge mark was broken in the step forward for minorities in swimming when Simone Manuel, Lia Neal, and Natalie Hinds swept the podium in the 100 freestyle. When those three touched the wall, they solidified in history the first time three swimmers of color stood on the podium together at the NCAAs.

This moment helps bring down barriers. In recent years the stigma that people of minorities don’t perform as well as their caucasian counterparts in swimming has began to disintegrate. The podium sweep for Manuel, Neal, and Hinds represents a very important moment in swimming and American history.

Kelsi Worrell had an absolutely amazing NCAA Championships for Louisville. Earlier in the season, Worrell split a 22.34 in the 50 fly which after extensive research revealed that her time was the fastest fly split ever performed.

Before the start of the season, the fastest 50 fly split was a 22.52 done by Christine Magnuson from the super-suit age. Beryl Gastaldello split a faster time at SECs with a 22.46 just a day before Worrell went a 22.34.

In finals, the crowd went crazy when Worrell split a 21.96 becoming the first woman ever under 22-seconds for a 50 fly split. Now, the closest fly split to Worrell’s 21.96 is Gastaldello’s 22.46 meaning that the second fastest 50 fly split swimmer was half-a-second slower than Worrell.

Simone Manuel began her freshman season at Stanford this year, and has already taken a camping knife to the sprint events and carved her name all over them. She first raised eyebrows this season at the Art Adamson Invitational where she became the first woman ever to break 46-seconds for a 100 freestyle split with a time of 45.81.

That time stood as the fastest relay split going into the meet, but many knew that a fully rested Manuel had never been seen before at the NCAAs and the likelihood of a faster split was very possible.

In the prelims, Manuel split a 47.72 on the anchor leg of Stanford’s 4×100 medley relay which many saw as a somewhat disappointing performance. Come finals, Manuel shut them up when she ate up a 2.23 second lead for Virginia in order to win the 4×100 medley relay for Stanford and set a new American record.

Going into the freestyle leg, Stanford was 2.23 seconds behind Virginia. At the 350 yard mark, Ellen Thomas for Virginia turned in 3:00.58. Thomas had almost two full seconds on Manuel with 50 yards to go, with Manuel turning in 3:02.74. That last 50, Manuel found a new gear and split a 23.67. Her pure determination and willingness to win got her past Thomas at the wall, beating her by just one one-hundredth of a second. Manuel was brilliant on that last 50 to solidify the gold and American record performance.

On the final day of competition Manuel won the individual 100 free with a new American record time of 46.09 and split a 45.79 as the anchor of the winning 4×100 freestyle relay time.

#2. KELSI WORRELL BECOMES FIRST WOMAN UNDER 50 SECONDS IN THE 100 FLY

There have been few collegiate swimmers in history as dominant as Cal swimmer Natalie Coughlin, who left her mark in 2002 when she set American records in the 100 back (49.97) and the 100 fly (50.01). Incredibly the backstroke record still stands, but Louisville’s Kelsi Worrell made sure this past weekend to erase Coughlin’s name from the record books in the 100 fly.

In late February, Worrell first came close to Coughlin’s mark with a 50.17 at the ACC Championships to finish just 0.16 seconds

shy of the American record. After that performance and Worrell’s 22.34 50 fly split, eyes were peeled for the possibility of a 100 fly American record at the NCAA Championships.

Worrell delivered, breaking the American record and the 50-second barrier in the 100 fly heats with a time of 49.89. With that swim she was the first woman ever to break 50-seconds in the 100 fly, and took the top seed heading into finals by over a full second.

After that, many thought that she would slow down in finals due to the quality of her morning swim. Worrell had other plans, and for the second time that day dipped under 50-seconds in the 100 fly to drop a 41.81 and re-set her hours old American record.

#1. MISSY FRANKLIN BECOMES FIRST WOMAN UNDER 1:40 IN THE 200 FREESTYLE

Last year at the 2014 NCAA Championships Missy Franklin shocked the world after winning the 200 freestyle as a freshman and absolutely obliterated the previous American record.

In finals, Franklin took a jackhammer to Megan Romano’s American record of 1:41.21 with an incredible performance of 1:40.31. With that swim she won the event by almost two full seconds ahead of Georgia’s Shannon Vreeland.

After that the question arouse, would a woman ever by able to go under 1:40 in the 200 free, and if they could, would it be Missy Franklin?

After this, everyone knew that something big hung in the air: the last collegiate meet of Missy Franklin’s career, and possibly the last time we would ever see her rested for a yards meet.

After the 200 freestyle prelims Franklin was seeded first ahead of Stanford’s Simone Manuel. Franklin was a 1:41.92, Manuel a 1:41.93. This set the two up for a very competitive finals.

In finals, Franklin took control right from the get-go challenging Manuel to keep up with her. At the 50 she was a 22.98 and almost a full second ahead of Manuel. She turned in 47.74 at the halfway point, now over a second ahead of anyone else in the field. At the 150, the race was set and done. Franklin rocked a 25.91 on the third 50 to turn in 1:12.91; at this point she was two seconds ahead of her closest competitor. Franklin stayed on pace and clocked in at 1:39.10, taking 1.21 seconds off her American record and solidifying her name in history as the first woman under 1:40 in the 200 freestyle.

it would be cool to see one of the world’s best male swimmers (Lochte, Hagino, McEvoy) do a 200 SCY free fully tapered – 1:29 is not out of the question

Perhaps Yannick Agnel with his 2012 shape could’ve done it.

Hopefully I can watch one day the 100 free, 200 free and 100 fly finals in video.
Please, I can’t believe no one has filmed these races in the pool.
Please, post them on youtube.
Or to swimswam readers, please, if someone could record these races from the ESPN replays and then post them on youtube or directly here, it would be so nice.
It would be too bad that I can’t watch 3 amazing American and NCAA records in 2015.
Swim fans from outside of USA want to watch these swims!