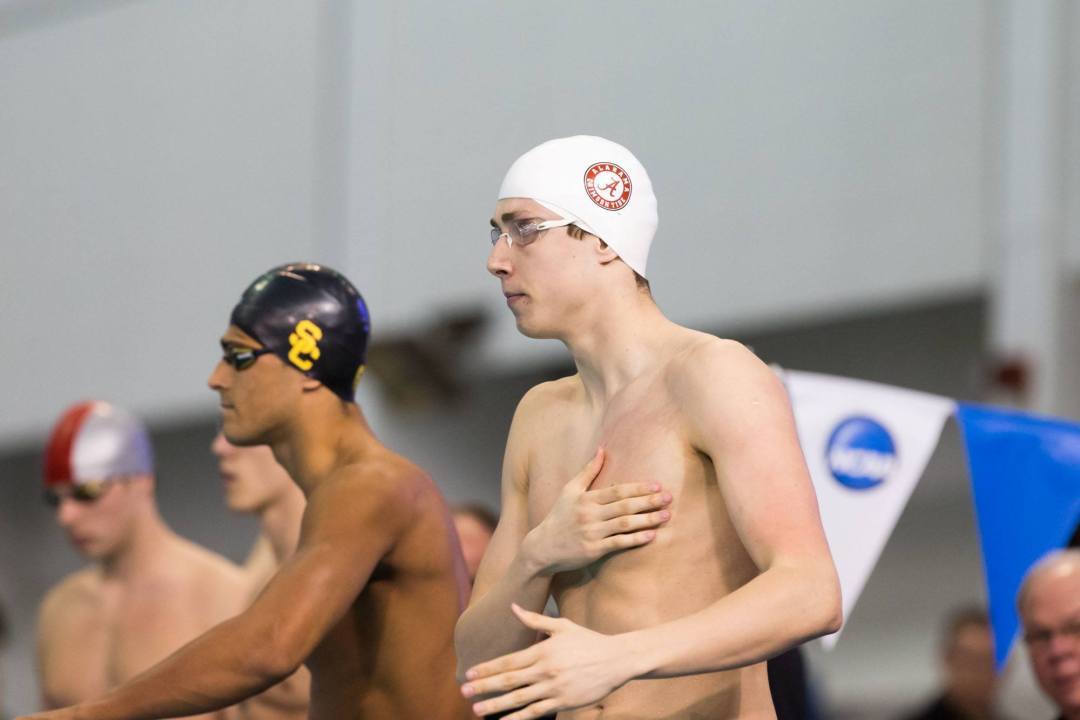 Kristian Gkolomeev is back to defend his 50 freestyle title at this season's Men's NCAA Division I Championships. Gkolomeev is the number one seed in the event. Archive photo via Tim Binning/TheSwimPictures.com

The defending co-champions, Kristian Gkolomeev and Brad Tandy are both back to defend their title in the 50 freestyle, although they will each look to win the splash and dash title outright this season.

With only four swimmers under the 18 second barrier this season, the race is shaping up to be a close contest for second. Gkolomeev swam an 18.64, the fifth fastest 50 time in history, at the SEC Championships in February, and he holds the top spot on the psych sheet heading into the meet by a full quarter of a second.

Florida’s superstar freshman Caeleb Dressel was next to Gkolomeev for that blistering 50 freestyle, but could not keep Gkolomeev’s pace. Dressel enters as the two seed with his 18.89 from the prelims of the 50 at SEC Championships. He added just .04 to his seed in finals. The freshman squashed the concern about his training in Florida’s high yardage program with his SEC performance, and could be even faster at NCAA’s.

Tandy, the other champion from a season ago, enters as the three seed with an 18.95, identical to the time he and Gkolomeev tied with in Austin last season. The Arizona standout has ground to make up on the top two seeds, but being one of the defending champions does not hurt his chances.

Simonas Bilis broke the 19 second barrier at the Men’s ACC Championships, bringing home the gold in the 50, 100, and 200 freestyles for NC State. Bilis did not make the A final in 2014, taking ninth with a 19.21 in the B final, but is the fourth and last swimmer in the field under 19 seconds. He will enter Iowa City with an 18.98, and is a swimmer to watch, already having a breakout season.

UNLV’s Dillon Virva is another top eight swimmer this year who swam the B final a season ago. Virva has already posted a 19.17, a personal best from the junior who took 13th a season ago. Virva beat out Louisville graduate Joao De Lucca,  as well as Williams and eighth seeded Andrew Kosic of Georgia Tech.

Michigan also has a star freshman in the top eight. Paul Powers broke the Michigan School record in the 50 at the Big Ten Championships in Iowa City with a 19.21, and has the added advantage of having raced in a championship meet at the NCAA pool this season.

Kosic tied with Williams for 15th at the 2014 championships, but already this season the senior from West Chester, Pennsylvania, has broken his Georgia Tech record with a 19.23. Kosic was Georgia Tech’s first point scorer since 2010 in the 50 last season, and has the chance to finish even higher this year.

Seeded outside the top eight are several swimmers who could make this a very interesting event. Seth Stubblefield of Cal was 18.9 in this event last season, and split an 18.63 anchoring the Cal 200 freestyle relay at the Pac-12 Championships this season. Don’t count out the Longhorns either, John Murray and Matt Ellis both A finaled for Texas a season ago, and could be in mix again this season.

Dark Horse:  Bruno Ortiz, Michigan. It’s strange to write Ortiz in as a dark horse in anything, but Ortiz is seeded just 23rd on the psych sheet with a 19.48. The senior lit up the pool at the Big Ten Championships, anchoring the Michigan 200 free relay with an 18.61. He also anchored the 400 medley and freestyle relays with a pair of sub-42 100’s. If Ortiz is on like he was at the Big Ten Championships, he could very easily move up to the top 8.

Cordes has been 20 pt high before…..based on his taper drops in the past, don’t rule him out. We could see a triple win from him. Bear Down

Word out of Tuscon is that the 50 free will be more of a focus than the 200 breast. Big leap of faith.

Where did that rumor come from?

Rumor has it that he is actually dropping breaststroke completely

I think Kristian is a definite win. After that id say it is pretty safe to say that Dressel locks down second place after being on a drop taper for SEC. and i think the defending champ Brad will be 3rd based on his constancy. And your forgetting about Texas’ Matt Ellis who is usually a dark horse and goes much faster when he tapers. He did make the Pan Pac team in the summer in the 100fly and made the A final last year in the 50 free. But i do not think Simonas Bilis who just squeaked under 19 by .02 will get third he was fully tapered for ACC based on him going all best times.

0
0
Reply
My two dollars
Reply to  My two cents

No one is ever a definite win, especially in the 50 freestyle