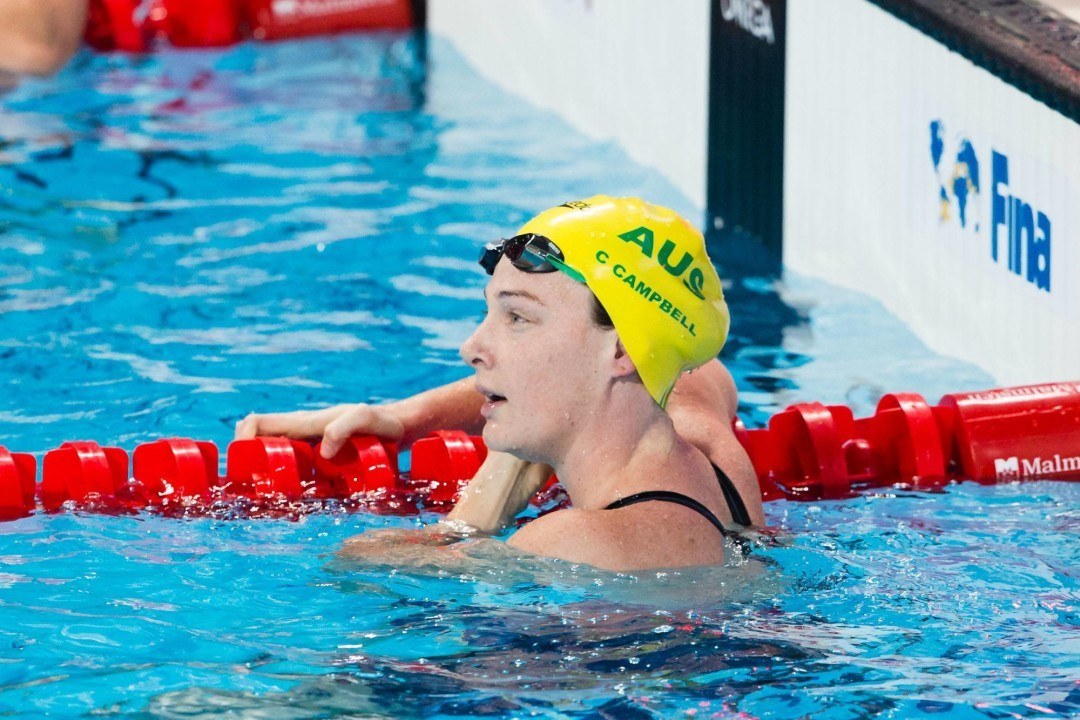 American star Missy Franklin started off the 2015 Beijing World Cup stop with a bronze medal in the women’s 200 freestyle.

6 Storylines to Watch at the 2015 Beijing FINA World Cup

Emily Seebohm is part of a loaded women’s backstroke field assembling in Beijing.

Today marks the start of the second stop of cluster two, as swimmers have descended upon Beijing. In addition to the normal prize money available, there will also be an addition $300,000 split between the top 6 male and top 6 female finishers after the first two meets.

The unstoppable Campbell sisters made their magic happen again in Beijing, with Cate winning the 100m freestyle in a killer time of 52.96.  Bronte touched just .02 of a second behind, registering a 52.98.  For Cate, she adds this to her 50m freestyle gold from yesterday for the sprint double. The Campbell duo were the only sub-53 competitors of the field…in fact they were the only sub-54 competitors of the field, as USA’s Missy Franklin scored 54.39 for the bronze.

Australia racked up another two medals in this event as well, with a gold & bronze Aussie finish.  Dan Smith threw down a winning time of 1:46.70, with teammate Jacob Hansford wrapping up 3rd in 1:49.65.  Hansford was just .01 off of the silver, which was snagged by Chinese swimmer Zhang Lie in 1:49.64.  For Smith, he is the first swimmer to win 3 straight gold medals in the men’s 200m freestyle since his fellow Australian mate Thomas Fraser-Holmes pulled off the same feat in 2013-14.

Jamaican Alia Atkinson takes her 6th World Cup gold, winning the 50m breaststroke in a time of 30.65. Atkinson has won 12 gold medals in this event, including in 10 of her last 11 appearances, so tonight was just another display of the history-making standout.  Behind Atkinson tonight were Jiaying Zhang in 31.69 (note – representing “CLB” or club team) and Shi Jinglin from China in 32.46.

No surprise that South African breaststroking weapon Cameron Van der Burgh raced to the wall first in the 100 tonight, claiming his 8th World Cup medal of the year.  He’s made it clear he’s after the prize money on this World Cup Series, and puts his performance where his mouth is, clocking the only sub-minute time of the field (59.76). VDB is now unbeaten in both the 50m and 100m distances thus far this year in the World Cup Series. Swimming to silver in tonight’s race was China’s Yan Zibei in 1:00.57, followed by Australia’s Tommy Sucipto (1:01.16).

The men’s 100 butterfly was truly anyone’s race, with a fairly even field competing for World Cup gold in Beijing. Japan’s Masato Sakai turned in the fastest time tonight, registering a 53.52 for the win.  Russia’s Viacheslav Prudnikov was just .02 of a second behind, scoring a 53.54 for silver.  Aussie Nic Brown touched in 53.76 for the bronze.  Sakai’s win marks the first time since 2004 that there were different winners in each of the first 4 100m butterfly races at a World Cup.  Already having won this year are American Tom Shields (Moscow), South African Chad Le Clos (Paris-Chartres), Prudnikov and Brown (Hong Kong).

What the Campbell sisters are doing in terms of dominance in the sprint freestyles, teammate Emily Seebohm is doing in the women’s 100m backstroke.  Tonight Seebohm smashed the field with a swift 58.59, taking the gold by over a full second against an elite field.  Hungarian Katinka Hosszu was the next-closest competitor, but she was well-off at 1:00.26 for silver. Chinese swimmer Chen Jie claimed bronze in 1:00.48, with USA’s Franklin in 4th in 1:00.61. Seebohm now owns the top two times in the world in the event, with the 58.26 from Worlds for gold, along with tonight’s 58.59 performance. She won the 200m backstroke yesterday to go along with her 50m back silver at this meet.

China swam to the top of the podium in this event, with Xu Jiayu winning in a time of 24.65, a time tied for 5th-fastest in the world this year. Silver went to Australia’s Ash Delaney in 25.27, while Japan’s Yuki Shirai snagged bronze in 25.86. Jiayu won this same event last year in Beijing, making him the 2nd man from China with multiple golds in the event since Cao Zuewei did it in Shanghai (2001-2002) and Rio de Janeiro (2003-2004).

Hungary’s David Verraszto goes 2-for-2 in IM events in Beijing, doubling up on his 400m IM win from yesterday with his 200m IM victory today.  2:01.72 was enough to top the field, with Aussies claiming silver and gold behind the Hungarian.  Tomas Elliott and Kazimir Boskovic finished in 2nd and 3rd, respectively, turning in times of 2:02.07 and 2:02.14.  They, too, finished in the same spots in yesterday’s 400m IM contest.

Japan’s Katsumi Nakamura showed some grit, doubling up on his 100m freestyle victory from yesterday with another win in tonight’s 50m freestyle.  Although his 22.27 didn’t set the pool on fire, but it was enough to hold off Bao Ban who clocked a 22.56 for silver, along with Aussie Tehaumi Maxell who touched in 22.72 for bronze. For Nakamura, this is his 2nd successful 50m/100m freestyle double gold performance, after having completed the feat last weekend in Hong Kong.

Japan tops the podium again tonight, with Yuki Shirai taking gold in the men’s 200m backstroke in a time of 1:57.98.  Aussie Ash Delaney was runner-up, clocking a 1:58.86 for his efforts, with Wang Shun finishing 3rd in 1:59.50. For Shirai, this marks his 9th gold medal in the event across his World Cup races.

Denmark’s Jeanette Ottesen wins the women’s 50m butterfly in a speedy 25.81 for the 8th-fastest time in the world this year.  25.27 was the time she registered in Kazan for silver behind Sweden’s Sarah Sjostrom in this same race at the World Championships.  Bronze medalist in the Worlds’ race, Lu Ying (CHN) snagged silver here in 25.99, followed by teammate Qui Yuhan who touched in 3rd in 26.13.  For Ottesen, she rakes in her 5th gold medal of the World Cup thus far.

Japan’s Masato Sakai led wire-to-wire in this race, and held about a 10 second lead for more than half of the race.  15:29.46 was Sakai’s winning time, earning him his 3rd gold medal of the meet after having already won the 200m butterfly and 100m butterfly events.  Sakai demonstrated quite a range in distances this meet. David Brandl of Austria took silver in 15:44.08 and Yizhe Wang brought home bronze in 15:44.90.

Katinka Hosszu (HUN) nailed down her 19th overall World Cup 400m IM win tonight, taking the gold in a time of 4:39.49. She easily won the event over teammate Zsuzsanna Jakabos, tonight’s 200m fly gold medalist, who finished 2nd in the 4IM in 4:46.46.  Japan rounded out the top three with Rika Omoto raking in the bronze in 4:49.74.

http://www.eurovisionsports.tv/fina/swimming/index.html#
does that work for you? 🙂

Australia now officially owns the 100 and 200 back for men and women. Seebohm and Larkin rule. USA better step up its game. A 58.5 is crazy fast for Seebohm this time of year. Let’s go USA!

I wouldn’t say that either the men’s or women’s backstroke events are exactly “locks” with regards to Rio golds.

Seebohm SHOULD be justifiably seen as W100 favourite but Wilson, Nielsen & Hosszu (if she chooses to swim it) will certainly have something to say & Fu (CHN) is knocking on the door of breaking 59. Franklin will, realistically, been to return to her best to be competing for medals ….. and find a new level to be challenging Seebohm. Certainly do-able but she’s being handed a stiff challenge and she needs to fix those technical issues. Whilst good to see Coughlin back to 59low, she’ll need new PBs to be in medal mix.

200 is friendlier for Franklin as… Read more »

Good points. What do you think about C1 and C2? I think despite their deep love and sisterhood, C1 is pissed. That 24.3 is faster than what she did in the finals in Kazan. I pray for her health and complete recovery from surgery. I also am forming a prayer circle for the last 40m in her 100m Freestyle. I think C1 wants that (double) Olympic Gold bad and she can get it with some work and race-ready steeliness and mental fierceness.

2- ‘the world’s most marketable athlete’ beaten by 1 .5 & over 2 secs in the 100 . We realise there are trade issues with China but that is an own goal . Pro athletes do not turn up at matches to be thumped .( esp in China) .

Re C1, she most certainly wishes the upstart would get “back in her box” but there’s little chance of that happening whilst C2 is having so much fun “stealing her show” ! Double individual gold in Rio ? I think C1 would happily settle with one plus the 4×100 gold. Both fit & healthy in Rio then I wouldn’t want to pick it ….. and lets remember Sjostrom is still very much in the picture. Neither W50FS nor W100FS are “locks” for anyone.

Yes, the women’s sprint frees are certainly not locks. But I think since Sjostrom and her coach have come to terms with the fact that 200 free is a stronger possibility for her, that training will likely affect her sprinting. She already isn’t a front-half sprinter. We’ll see.

The Ozzies are on fire! And Seebohm separating herself further and further from the rest of the pack.

In general, I’m still not yet as concerned as others are about Franklin. She missed at least 6 months of her optimal level of training from her injury, then probably another month roughly with her transition to pro and back to CO. If she’s still at this level or not much better by the end of this calendar year, then it’s time for concern. At this point my only concern is her consistent lack of improvement in starts/turns/breakouts injured or not. If it’s only the remnants of injury holding her back then fine, but otherwise I’ll admit it’s concerning; it’s been… Read more »