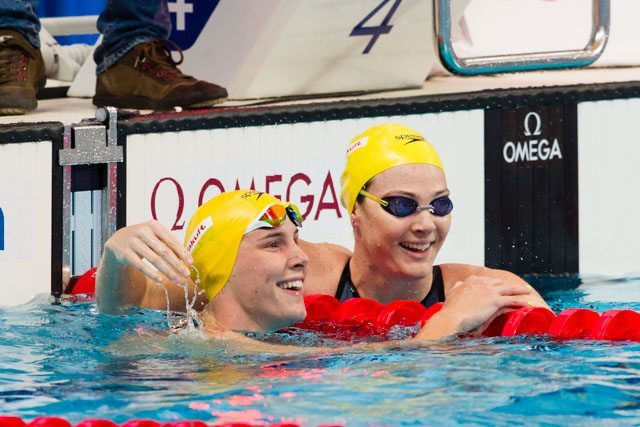 Once again the Campbell sisters of Australia will go head to head in the women's 100 freestyle... Current photo via Tim Binning/TheSwimPictures.com

The second day of prelims at the 2015 FINA World Cup Beijing was lackluster in terms of results, but setup a few races should be exciting to watch in tonight’s finals.

Once again the Campbell sisters of Australia will go head to head in the women’s 100 freestyle with Bronte posting a 54.58 followed by Cate who recorded a 54.76. In last night’s 50 freestyle final Cate go the better of her younger sister, tonight Bronte will look to return the favour. American Missy Franklin qualified with the third fastest time of 55.16.

After winning the 100 breaststroke on Tuesday Jamaican Alia Atkinson will look to win her second gold of the competition in the women’s 50 breaststroke. Atkinson posted a 31.50 followed by Zhang Jiaying of China who recorded a 31.97 and American Micah Lawrence who finished in a time of 32.01.

Lawrence will also be involved in the women’s 200 breaststroke where she goes into the final with the fastest qualifying time of 2:28.57.

Australian Ashley Delaney, who won the men’s 100 backstroke, posted the fastest qualifying time in the 50 backstroke hitting the wall in a time of 25.41.