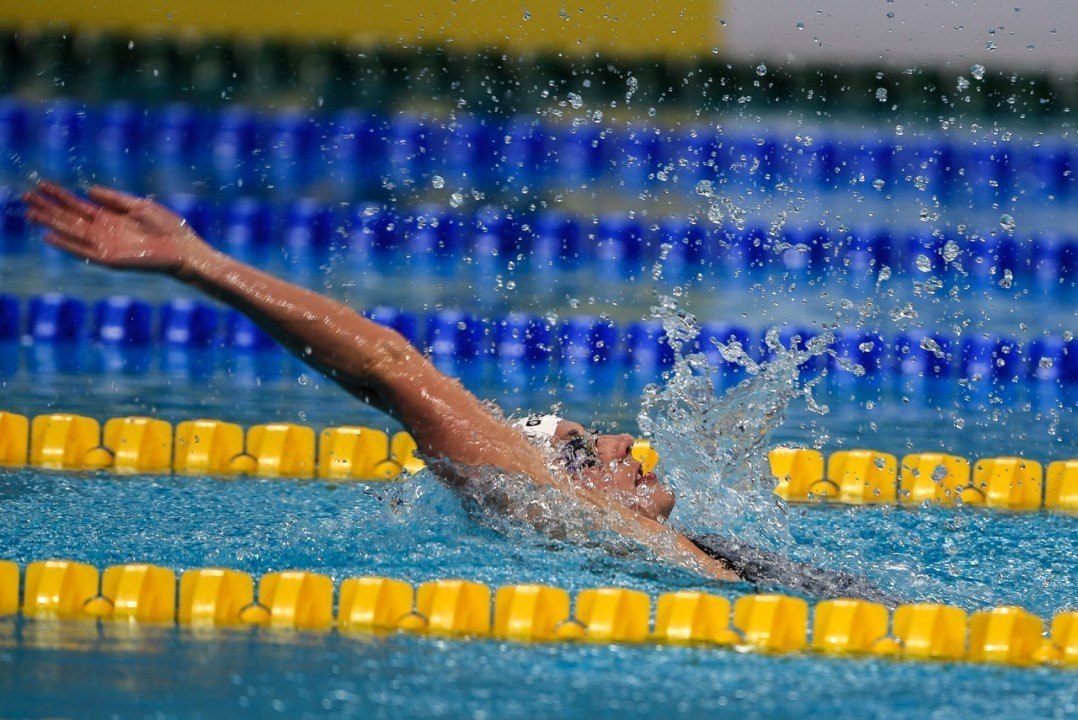 Katinka Hosszu gave her own world record a scare this morning in the 200 backstroke Archive photo via Peter Sukenik/www.petersukenik.com

Jenna Laukkanen continues to have a great meet for Finland, after winning in the 50 breaststroke she was the top qualifier this morning in the 100. Viktoria Gunes also made it into the semi, the young Ukrainian born Turkish swimmer will only improve her chances as the races get longer. 50 silver medalist Fanny Lecluyse is there as well- with Moniek Nijhuis looking to bounce back from a disappointing fourth through to the semi 2nd.

Evgeny Sedov and Marco Orsi have been the class of the sprint field thus far in this meet and the morning’s results reflected that. The younger Sedov showed a bit more fight in prelims, qualifying first in 21.06. Russia, Poland and Belgium each got two swimmers through, and at 19 years old Sedov was not the youngest to make the semi. That honor went to 18 year old fast rising Turkish sprinter Emre Sakci, who qualified 15th.

While many other swimmers continue to prefer to be tactical in the morning, Katinka Hosszu is seizing every opportunity to go after records. This morning she swam one of the fastest 200 backstrokes ever, falling a few tenth’s short of her own world record in 1:59.95. Hosszu had enough pace to break the record- she took the first 100 out in 58.46.

Her swim outshadowed what is turning into a breakthrough meet for Iceland Egylo Osk Gustafsdottir, who smashed her own 200 backstroke record to qualify third. Daria K Ustinova of Russia should be in the hunt for a medal tonight as well, she qualified second.

After sitting out the 200 breaststroke yesterday, Lithuania’s best medal hope Giedrius Titenis blasted to a huge national record in the 100 breaststroke to pace early qualifying in 57.08. He was later bested by Adam Peaty, who has looked a little bit heavy and out of peak form at this competition.

Those two should face stiff competition from 50 champion Damir Dugonjic, who swam a conservative race this morning, and the top two from the 200 last night, Marco Koch and Daniel Gyurta. World junior record holder Anton Chupkov is also through to the semi-final.

Despite appearing on the heat sheet, Katinka Hosszu did not take part. Perhaps it was tactical by the Hungarian squad as they still put two swimmers in the final: Lilian Szilagyi and Zsuzsanna Jakabos.

However, with the Iron Lady gone this is German veteran Franziska Hentke‘s race to lose, she qualified first well in 2:05.07.

Germany’s Phillip Heintz woke up the crowd when he bested the veteran of veterans Laszlo Cseh to qualify first in this event. Expect Cseh to be much faster tonight- he improved in every round on his way to a 100 butterfly victory last night.

Roberto Pavoni was the only medalist from yesterday’s 400 to make it through. Sweden’s best IM swimmer of all time, Simon Sjoedin, also made it through to the final.

Once again, it was no surprise that Russia qualified first this morning. However, they will face a harder road in this final then they have in the previous two. The silver medal team from the 2014 World Short Course Championships made it through to the final without unleashing their biggest weapons.

The Netherlands (3rd) can still add Femke Heemskerk and Ranomi Kromowidjojo to their team tonight. Add a strong morning swim from Inge Dekker (23.59), and the Netherlands can definitely take this event. Denmark (4th here but Bronze medalists in Doha) did use Jeanette Ottesen, and don’t have Mie Nielsen or Pernille Blume to beef up their roster tonight, so look to be out of the running.

Both Italy (2nd) and Sweden (3rd) made it through using their best swimmers.