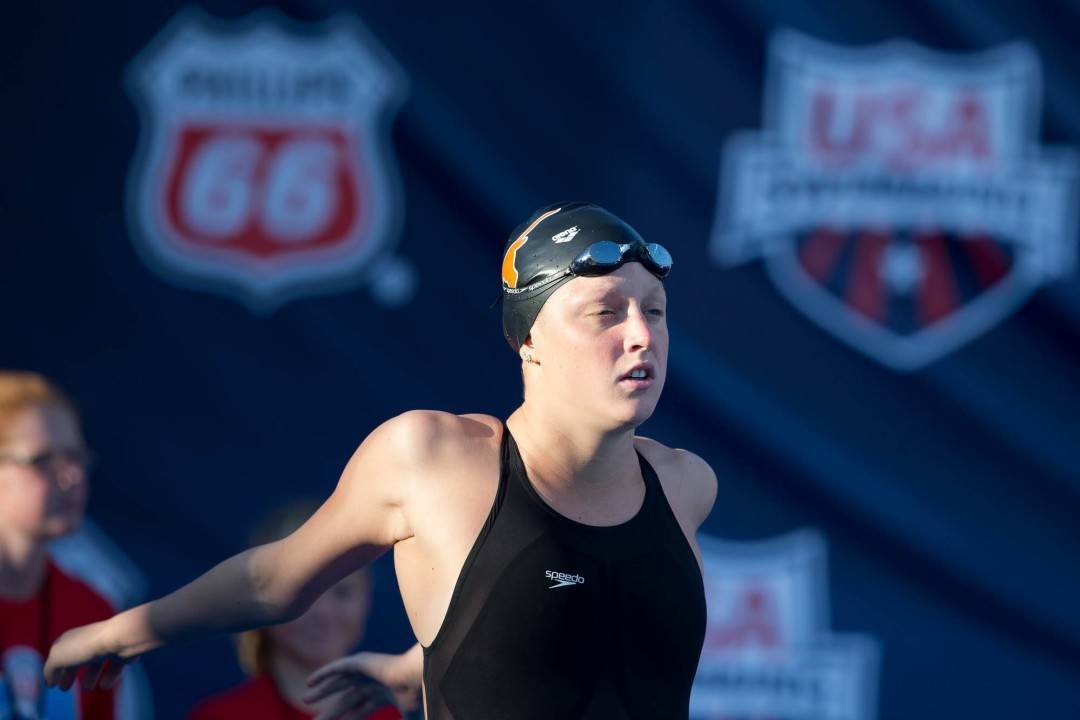 Madisyn Cox of Texas won the 200 IM at tonight's Texas Invite, hitting the fastest time in the NCAA this season and leading the way for many strong swims. Current photo via Tim Binning/TheSwimPictures.com

After just the 800 free relay finals on Wednesday night, tonight marked the first full finals session of the Texas Invite. This meet is the big mid-season meet for some of the best teams in the NCAA, and, while all the swimmers will be in varying stages of rest, shave, and tech suit, many teams will use their performances this weekend to gauge their 2015-2016 season up to this point.

In a real nail-biter, the Texas women took the 200 free relay, when Mimi Schneider, Rebecca Millard, Brooke Hansen, and Sam Sutton finished just one one-hundredth ahead of the Arizona team of Annie Ochitwa, Katrina Konopka, Taylor Schick, and Laura Kurki. The Texas team posted a 1:28.94, with Arizona just behind at 1:28.95. The fastest splits of the night came from Schick, a senior, and Millard, a sophomore, who each swam 21.94. The University of Southern California team of Anika Apostalon, Kirsten Vose, Chelsea Chenault, and Evan Swenson finished third in 1:29.13, followed by Wisconsin, UCLA, Arizona’s B team, the University of California Santa Barbara, and Texas’s B team.

The University of Texas’s A relay, the heavy favorites, DQ’ed in the event after a false start by lead swimmer Jack Conger. The Texas men also DQ’ed last night in the 800 free relay, so they have missed out on some crucial top relay points. BYU also faced a disqualification.

The University of Southern California’s Chelsea Chenault dropped nearly five seconds from her prelim time to win the 500 free in 4:39.94. Last year, she placed 10th at NCAA Nationals. She was followed by last year’s 15th place finisher, Arizona’s Bonnie Brandon, who swam a 4:40.53,  and last year’s 12th place Danielle Valley from Wisconsin, who posted 4:41.25.

Defending NCAA champion Clark Smith posted a 4:08.82 in the 500 freestyle, breaking Cristian Quintero‘s Texas Swimming Center pool record of 4:10.02 and Michael Klueh‘s Longhorn record of 4:09.32. His swim was the fourth-fastest in history, just missing the American record 4:08.54 set by Peter Vanderkaay back in 2008.

Before this weekend, Smith held the fastest time in the world this season with a 4:21.95, so the entire field brought in some speed.

Last year’s NCAA third place finisher Madisyn Cox of Texas led the way in the 200 IM, dropping over a second from her prelim time to post a 1:54.29 NCAA A standard, the fastest time in the NCAA this season.

Notably, in the B final, UCLA’s Linnea Mack dropped half a second to swim a 22.44, scoring points for ninth place, but posting the fifth fastest time of the night.

Ringold would have been fast enough to make last year’s B final at NCAA Championships.

The University of Southern California team of Hannah Weiss, Kirsten Vose, Lucy Worrall, and Anika Apostalon hit an NCAA A standard to win the 400 medley in 3:30.62. With that time, the foursome would have placed fourth at NCAA Championships last year, three places ahead of USC’s actual finish last season. Compared to the other teams, USC got a huge boost from their breaststroke leg; Worrall’s 58.57 split was at least half a second ahead of every other breaststroker.

Arizona swept first and second place in the 400 medley relay, with both their A and B teams finishing well ahead of third place Texas, who completed their first DQ-free relay of the meet. The Arizona team of Chatham Dobbs, Blair Bish, Mathias Oh, and Renny Richmond won in 3:10.50, while their teammates Thane Maudslien, Gage Crosby, Rasmus Skjaerpe, and Chad Idensohn swam a 3:11.56 for the silver (with Idensohn achieving the risky and elusive 0.00 reaction time).

“That swim is the fastest time in the world this season, edging out Katie Ledecky‘s 1:56.66 from last month.” Ella Eastin swam a 1:54.53 at the Texas A&M meet last month.

Hannah, I like when you say “is the fastest time in the world”.
Considering that only USA swims in yards…. 🙂

Fastest in the world (for yards) is very misleading. I thought at first was maybe talking about a short-course or long-course meet

What’s up with Will Licon– he didn’t swim finals. Andrew Wilson didn’t swim finals either– but he split a 28.5 on his breastroke leg in the 2 IM in prelims— I can’t remember a faster breastroke split. Can’t wait to see what he does in the 100 breast tomorrow (and next week at the duel in the pool– when he will probably be fully tapered).

Word seems to be that academics are taking priority right now, a lot of the swimmers have exams this week, and academics always take priority. Hopefully that means fast times and fewer scratches Friday night and all of Saturday