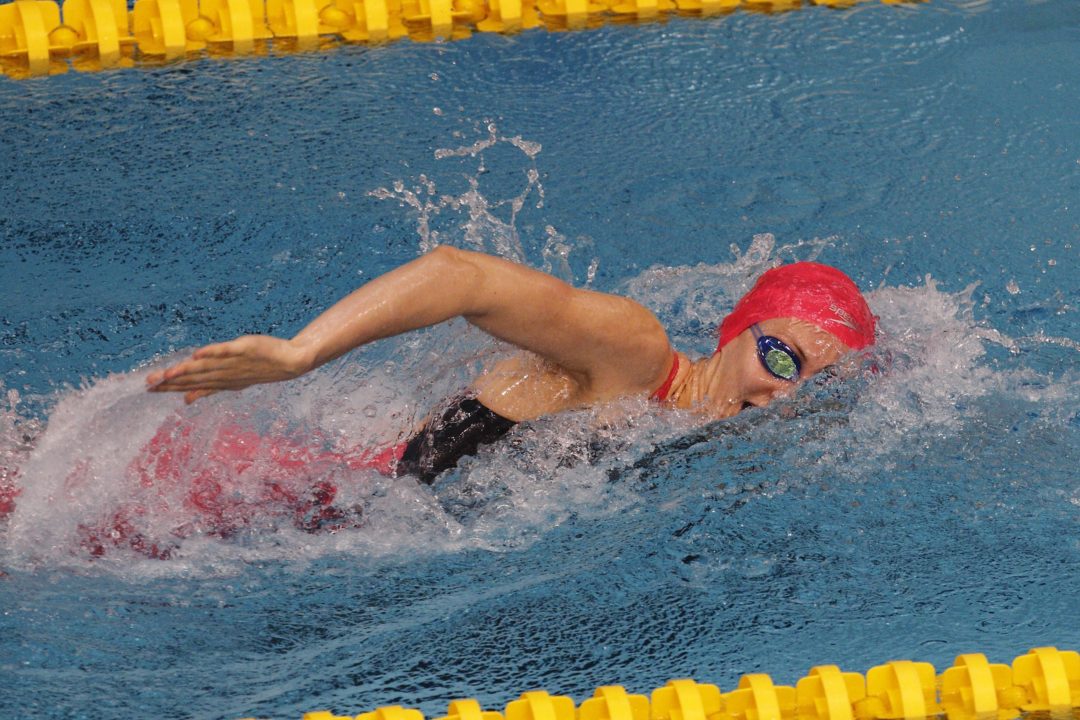 Jazmin Carlin swam away with 2 medals at the 2015 European Short Course Championships, but still recognizes the ever-present threat that is Katie Ledecky, on her route to Rio. Archive photo via (Photo by David Crawford / www.stillsport.com)

Carlin came into the European Championships as one of the favorites in both the women’s 400m and 800m freestyle events and swam away with the top prize in both. She fought off a Hungarian in each race to do so, beating runner-up Boglarka Kapas by just .42 of a second in the 800m and by touching ahead of Katinka Hosszu by just .03 in the 400m. Carlin wound up with two career-best times of 8:11.01 in the 800 and 3:58.81 in the 400m to wrap up a successful meet.

What’s one factor that contributed to the 25-year-old Carlin’s performance?  Quite possibly the swimming of the American World Record holder, Katie Ledecky. “When you have got a competitor in your event that is breaking records and even winning the 200, which for a distance swimmer isn’t likely it can be daunting”, Carlin said of the U.S. phenom in an interview prior to her trip to Netanya.

“I think she has shown the distance swimmers that you need to have that speed to go out fast enough and I am working on that and my 200 is improving. Obviously she is an incredible athlete and it is tough when she is in your event. I don’t think any of the other swimmers on the British team are jealous that she is not in their events.”

Says Carlin of the ever-present threat that is the “Legendary Ledecky”,  “It is great because she is proving the impossible is possible and she is doing times that people thought could never be done by a female. It is tough having her in my event but it has also given everyone the confidence that we have something to chase and something to work for now.”

Her comments echo those of another competitor, New Zealand stand-out and two-time 2015 World Champion, Lauren Boyle. After Ledecky’s accomplishments in Kazan, Boyle described Ledecky’s unprecedented talent, exclaiming, “What Katie Ledecky is doing for the sport is amazing and I think it helps all of us swimmers open our minds to what is possible.”

Carlin is set to compete in the United States on the European All Stars’ roster at the 2015 Duel in the Pool. Competition starts this Friday, December 11th. The two-day event takes place at the storied IUPUI Natatorium in Indianapolis, Indiana.

Imagine a team full if kids with that attitude! What great competitor, I hope she does very well for her self.

Jaz showed a huge amount of class with her statements. I am a fan now.

Any race videos from that meet available?