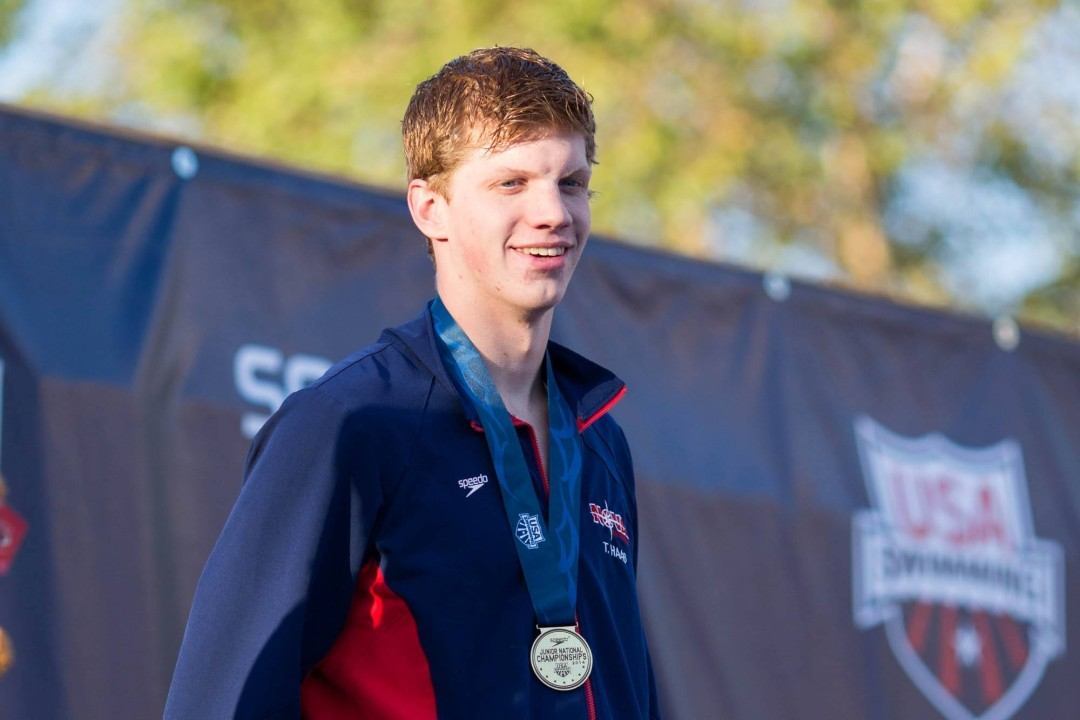 NOVA's Townley Haas will try to double his win total today, holding the top 400 free seed a day after smashing the field in the 100. Current photo via Tim Binning/TheSwimPictures.com

Speedo Junior Nationals reach their midpoint today in Irvine on the third day of the five-day competition. Day 3 only features four prelims events, but still has a few major storylines to watch.

Townley Haas is red-hot after blasting to a 100 free win last night. He moves up in distance today as the top seed in the 400 free. Haas already holds the meet record with his winning time of 3:51.99 from last year – can Haas make the leap under 3:50 at this year’s nationals?

It was 16-year-old Sierra Schmidt who came down with the first top seed of the morning, going 4:13.08 to lead the girls 400 free. That’s a best time for Schmidt by about 1.7 seconds – she’s swimming unattached as she switches from Germantown Academy to North Baltimore Aquatic Club.

Area Tallahassee’s CeCe Williams is the second seed, not far behind in 4:13.52. Williams is one of the headliners of Virginia’s incoming recruiting class. She’s just a tenth up on 200 fly champ Easop Lee, a South Korean national who trains at NBAC. Lee was 4:13.65 for third.

The last three swimmers in the A final came in within two tenths: top incoming seed Stephanie Peters was 4:15.53, Moriah Simonds went 4:15.56 and Jessie Gvosdas was 4:15.68 to sneak into the championship heat. Left out by just .2 was 15-year-old Chenoa Devine, who had an outstanding swim from outside of the circle seed to go 4:15.88.

The real fireworks in this race are likely being saved for tonight, as Townley Haas was just 3:53.50 this morning. That’s still a great swim (it’s the top seed by a second and a half), but is a ways off Haas’s own meet record of 3:51.99, a time he’s expected to shatter tonight. Haas was almost exactly this same time at prelims last year (3:53.48 to be exact) and rolled down to that 3:51.9 at night. With the speed he showed in the 100 last night, there’s a real feeling Haas is on the verge of an even bigger breakout summer, and this is arguably his best race, though he’s outstanding in the 200 as well.

Brock Turner of the Dayton Raiders was second to Haas in that heat and sits second overall at 3:55.14. The third seed is another young swimmer who’s created some buzz, Nitro’s Sean Grieshop. At 15, Grieshop has been a rising star for awhile now, but has had a pretty quiet Juniors so far. Tonight’s final offers him a real chance to make some waves, though, while chasing down Haas.

The fourth seed is Sam Magnan out of Parkland (3:55.59) before things drop off again a bit to 3:57, where the rest of the A final sit. Magnan had a gigantic drop this morning, as his previous best was 4:03.11 – it’s not often a swimmer can break four minutes for the first time by getting that far under.

Adam Linker went 3:57.42 for the fifth spot, followed by Santa Clara’s Michael Messner at 3:57.51. New Jersey’s Scarlet Aquatics put a swimmer into the final with Eric Stobbe‘s 3:57.67, and Palo Alto’s Curtis Ogren, known more as an IMer, showed some freestyle prowess in going 3:57.68 for the last A final slot.

The girls of Carmel have really been on a roll so far, and Veronica Burchill kept that going by taking the top seed in the girls 100 fly. Burhill was the only swimmer to break a minute this morning, going 59.28, and the 16-year-old leads by eight tenths.

Another Indiana swimmer, Duneland’s Vanessa Krause, was second at 1:00.02, and will try to make her first sub-minute foray tonight.

Longhorn Aquatics Victoria Edwards is the third seed at 1:00.35, just two one-hundredths up on Haley McInery of SwimAtlanta. Things are very tight from there heading into finals. A tenth back is Redlands Sonia Wang (1:00.47), another tenth back you find Lindsey Engel (1:00.56) and the final two entrants in the A heat are within a tenth of her. They are Maddie Banic (1:00.59) and Eva Merrell (1:00.64).

Alex Valente held onto his top seed and will grab an inside lane for tonight’s final in the boys race. Valente went 53.10, which is a new lifetime-best for him. At 17, Valente is on the younger end of this age group after taking down the 100 fly NAG record in short course for 15-16s. He’s got a long ways to go to get the NAG here (it’s a 51.10 set by a certain Michael Phelps), but Valente is starting to make a real name for himself as a butterflyer to watch in the future.

Azura Florida’s Luis Martinez went 53.54 for the second seed, just a tick ahead of Rose Bowl’s Sascha Subarsky (53.66). Though he’s had a bit of an up-and-down meet, 15-year-old Michael Andrew had what’s probably his best swim of Juniors here, going 53.90 for the fourth spot. That’s a lifetime-best by six tenths, and puts him a little over a second off the 15-16 NAG set by Justin Lynch (52.75).

The last guy under 54 this morning was Max Holter of Fort Collins Area Swim Team in Colorado. Holter went 53.98 – his first time under 54, 55 and even 56. Holter was 56.19 heading into this meet, with his lifetime-best coming back in April.

Greg Brocato (54.22) and Andrew Liang (54.24) are a tight six and seven seed combo, with Patrick Park getting the last championship heat big in 54.30. Pleasanton’s Maxime Rooney will lead the B final after going 54.44.

And the live webcast has again crashed for me. 😡

Amazing! It’s back!
Of course it has crashed just when the 3 fastest heats started! 😆

It has been happening for me too like that, wonder why