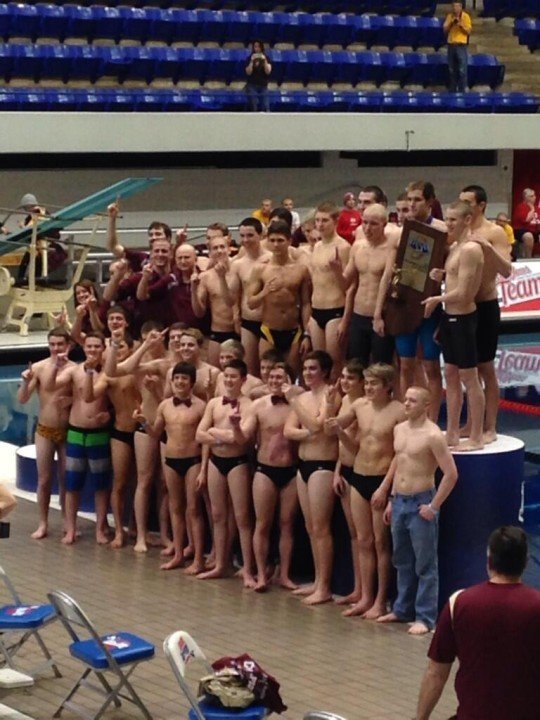 With three national public school records, the boys from Chesterton High School stood out as the obvious choice for the 2014 Swammy Award. Current photo via ChestertonHS on Twitter

There were a lot of outstanding boys’ high school swim programs during the school year that ran from September 2013 through May 2014, but the one that stood out the most was Chesterton High School in Chesterton, Indiana.

The Trojans won their fourth Indiana state high school championship title in seven years and broke quite a number of records along the way. Coach Kevin Kinel’s roster was senior-heavy, and his swimmers made the most of their experience to finish the season with two national public school relay records and one individual record, in addition to five state records and numerous team records.

This “perfect storm” of a team consisted of seniors Blake Pieroni, Jack Wallar, Patrick Curley, Andy Hurst, Tony Kincaid, Jack Kurfman, and twins Aaron and Ethan Whitaker; junior Josh VanNevel; and freshmen Gary Kostbade and Wesley Slaughter, amongst others. Chesterton dominated the state meet, racking up 240 points, more than 40 points ahead of runner-up Avon High School. It was a combined team effort, but the standout performances included some of the fastest individual and relay performances ever swum in the state of Indiana.

Three months later Chesterton lost the 400 free relay national record to Granada High School but the medley relay and Whitaker’s fly record made it unscathed through the end of the season.