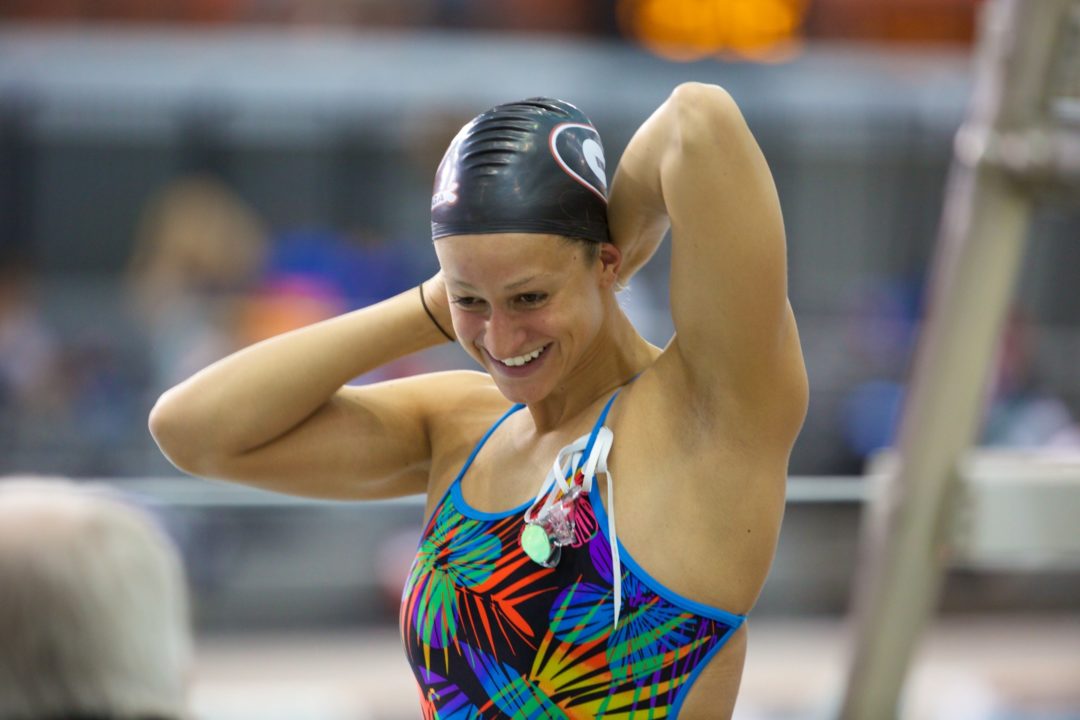 Meagn Romano will be swimming three events, the 200 freestyle, 200 backstroke, and the 50 freestyle, on the second night of the 2014 Mesa Grand Prix. Current photo via Rafael Domeyko, rafaeldomeyko.com

Refresh this link frequently, as we’ll be updating results live as we go through the morning session.

It’s the day of dirty doubles in Mesa! Megan Romano has the biggest challenge ahead of her this evening after qualifying for the championship finals of the 200 free, 200 back, and 50 free. Tyler Clary and Elizabeth Beisel will both be swimming the 400 IM as well as the 200 backstroke.

Katie Ledecky and Michael McBroom will be going for their second victories of the meet tonight. Both will be contending for the 200 freestyle after winning their respective 400 freestyles last night. Ryan Lochte and Nathan Adrian will also be looking to tack on t0 their victory counts this evening after earning wins last night.

Elizabeth Beisel worked through the first 200 before she finally pulled ahead of the 16 year-old phenom Becca Mann. Beisel maintained her lead, dropping almost 10 seconds from her morning swim to win with a time of 4:39.68. Mann earned a second place finish with a 4:42.78. Stina Gardell got her hand on the wall for third at 4:43.87, followed by Caitlin Leverenz at 4:44.40.

Kim Williams won the B-final with a 4:54.59, dropping 5 seconds from her morning swim.

Tyler Clary put it on the line to win the 400 IM tonight. It was interesting to hear Michael Phelps’ commentary during this race while he was speaking with Rowdy Gaines. Clary finished with a 4:19.00. Conor Dwyer finished in second with a time of 4:22.26. His freestyle events have become a big focus for him, but Clary was too far to pull back in. Austria’s Jakub Maly posted a 4:23.93 to finish in third place and Michael Weiss finished fourth at 4:27.22.

The defending Olympic Champion Allison Schmitt fought to the end with Katie Ledecky in the finals of the women’s 200 freestyle, but didn’t have enough in the end. Katie Ledecky posted a time of 1:56.27. Schmitt posted a great time as well with a 1:56.90. Katie Hoff has looked strong all weekend. She reached in to finish third with a 1:59.93. Cierra Runge was the final swimmer to dip under the 2 minute barrier, finishing in fourth place.

Ryan Lochte and Darian Townsend took out the first 100 ahead of the field. Ryan Lochte took advantage of his under waters to finish the race with the win. Lochte finished with a time of 1:49.48, just ahead of Townsend at 1:49.94. Michael McBroom had great closing speed on the final 50, almost running down Townsend for second place. He finished in third with a 1:50.4.

Clara Smiddy flipped first at the 100, followed closely by Megan Romano. Elizabeth Beisel made a move as she swam into the 150. Her tempo picked up to sneak in for third.  Clara Smiddy won the race with a time of 2:12.53, followed by Fernanda Gonzalez with a 2:13.37. Elizabeth Beisel finished strong in her second race of the evening, posting a third place time of 2:13.75. Ally Howe earned a fourth place finish with a final time of 2:14.17.

Arkady Vyatchanin had a very strong first 100, and held onto his lead with unmatched under waters to win the race with a 1:58.04. Tyler Clary, the defending Olympic Champion, finished second with a 1:59.26. Three college swimmers finished in 3-5. Ryan Murphy, the NCAA Champion in both backstroke distances, finished third with a 2:00.27. Grigory Tarasevich from Louisville finished fourth at 2:00.32, and Jacob Pebley was fifth with his time of 2:00.82.

Cheyenne Coffman led a very experienced field to the wall in the finals of the women’s 50 freestyle. Coffman’s posted a time of 25.16, followed by Amanda Weir with a 25.45. Natalie Coughlin and Jessica Hardy finished in the third and fourth, respectively, at 25.54 and 25.71.

Nathan Adrian threw down the fifth fastest time in the world this year, winning the 50 freestyle with a 21.73, not too far off of his personal best. Roland Schoeman was not too far behind, sneaking his hand in for second at 22.19. Josh Schneider was third at 22.24, and Jimmy Feigen finished fourth with a 22.55.

Roy Burch won the B-final with a 22.91. Michael Andrew, the youngest swimmer in the final by 5 years, posted a 23.19, finishing fourth in the B-final, 12th overall.

has Romano decided on a permanent place to train? it seemed like she was jumping around everywhere!

anon…we’ve heard whispers. Waiting for some final confirmations to report…;-).

can’t wait! I actually think NBAC or SwimMAC (or Georgia…but given the current situation…) would be best for her. But I don’t recall her trying out SwimMAC…I think it was just Texas, Georgia, and NBAC? PS I have a hunch you guys know about Allison’s potential suit sponsorship as well?

Also, do you guys monitor every comment? I remember during the olympics, there were some with 1000+ comments…how can you possibly monitor that?

Love this site! Thanks for you hard work!

I may be wrong, but Simone Manuel did not win anything last night.

excellent time given that she took a break after the ncaa meet. in fact i dont recall her going under 440 in grand prix meets at any time in the past.