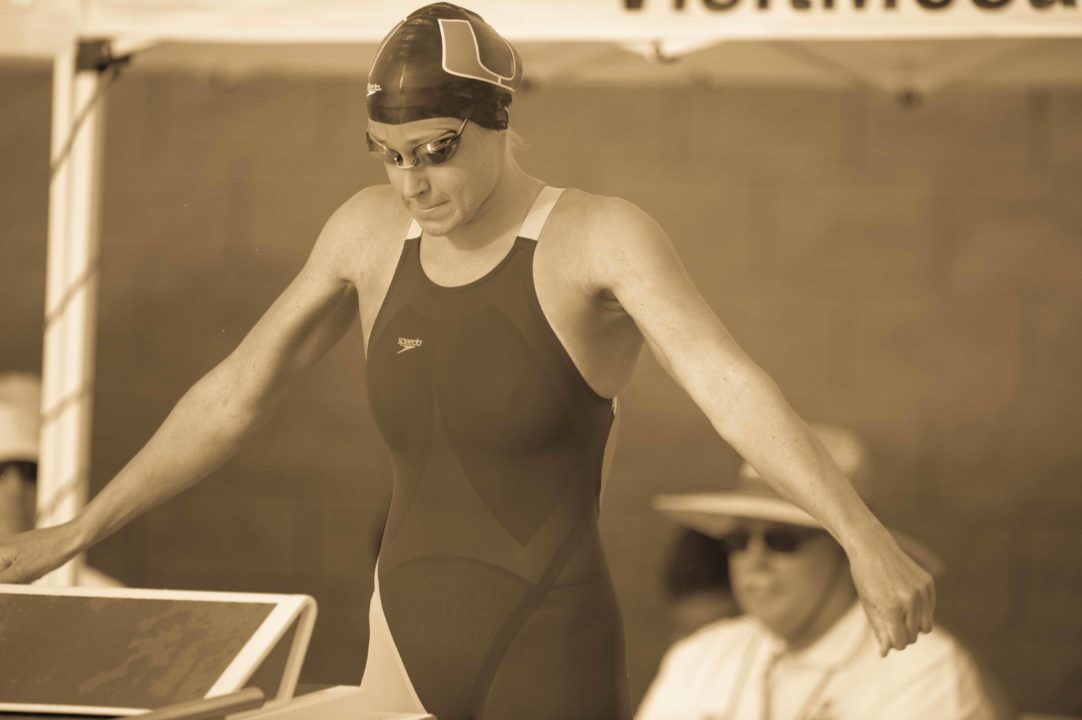 Katie Hoff made a big statement swim in the 200 IM at the Mesa Grand Prix, serving notice that she just might be the most impactful "comeback kid" in American swimming right now. Current photo via Mike Lewis/Ola Vista Photography

Much of the news out of Mesa, Arizona last week centered on Michael Phelps, and rightfully so. His comeback is gigantic for the sport of swimming and made waves even in the national sports media scene.

But the biggest “comeback” news out of the Mesa Grand Prix might be a different U.S. superstar, Phelps’ former NBAC teammate Katie Hoff.

Hoff, once one of the brightest young stars of the American swimming scene, had seen her career fizzle in her early 20s, culminating in an extended break from competition following the 2012 Olympic Trials.

She’d been quietly putting together a comeback effort in South Florida, but the Mesa Grand Prix was her first major national event in almost two years.

And what a “welcome back” it was.

Hoff blew out a tough 200 IM field (including Olympians Caitlin Leverenz and Elizabeth Beisel) to win the Grand Prix title, putting up a very-quick 2:12.92 in her return to the top of the class.

But more impressive than her time might have been how Hoff swam the race. Our own Amanda Smith broke down Hoff’s race in comparison to some of her career’s best swims and found that Hoff went out faster in the butterfly than she did in her lifetime best race, and also seemed to find more “easy speed” by putting up a slower stroke rate on the way there.

Her backstroke was equally scary, going right around her best backstroke split of all time. The only place Hoff fell off her former pace was in the final 100 – to be expected for an athlete competing mid-season.

The question up till now has been if Hoff can return to her former self in time to qualify for the U.S. National Team this summer. But a swim like that suggests that with proper rest and a shave-down, Hoff might be better than her younger self. We’ve now got a happier, re-inspired Hoff who is still just 24 years old but seems to have found a whole new reservoir of speed. It would be a major boost to U.S. Swimming’s hopes if it turns out that the best of Katie Hoff is yet to come.

After Ervin succeded in his comeback , M Phelps is coming back strongly , she is the most impressive to come back ! Very good for Usa team .

OH MY GOD!!!!
My request has been heard successfully!
USA swimming has posted almost all the finals from the Mesa Grand Prix on its youtube channel! 😎
http://www.youtube.com/channel/UCznRyLyXK9QWHs05PK2MGBQ
Only the distance events miss.
I can’t complain.
BIg thanks to the American swimming federation!
It proves they read swimswam!

Or perhaps Mel Stewart has spread the word.
Thanks again and please, keep up the great work for all Grand Prix meets and all national championships.

This kind of stuff really gets me going!
YEA, SWIMMING!!!!!!!

http://swimswam.com/terms-of-use-privacy/
Ok. I have read the rules about commercials.
But the thing I don’t understand is that when I mentioned the ESPN article last week about Allison Schmitt or Michael Phelps, my comment hasn’t been deleted.
Above, I mentioned youtube and my message hasn’t been deleted.
I mentioned Eurosport.
And in many comments the words Speedo or Arena are used.
Just a few examples.
Why not another swimming website?
I need some explanations to know what is available or not because I don’t understand anything.
I hope I’m not censured forever. 🙁
Don’t worry! I just read that other website!
But I keep my comments… Read more »

Sorry. I wanted to say allowed or not allowed.

Thanks Braden for your email.
I needed an explanation.
You look ungry.
I didn’t know that.
I couldn’t know that.
I understand your reaction.
I couldn’t imagine for one second that it was possible.
Suddenly I see them very differently.
And now I’m even more right to keep my comments for swimswam.
Long live swimswam!

Bobo, You probably will never see this comment, but honestly I always look in the comments section of articles on Swim swam to see if you have written anything because I learn so much from what you have to say. Please keep commenting!!! I LOVE this website, and members like you enhance my enjoyment!