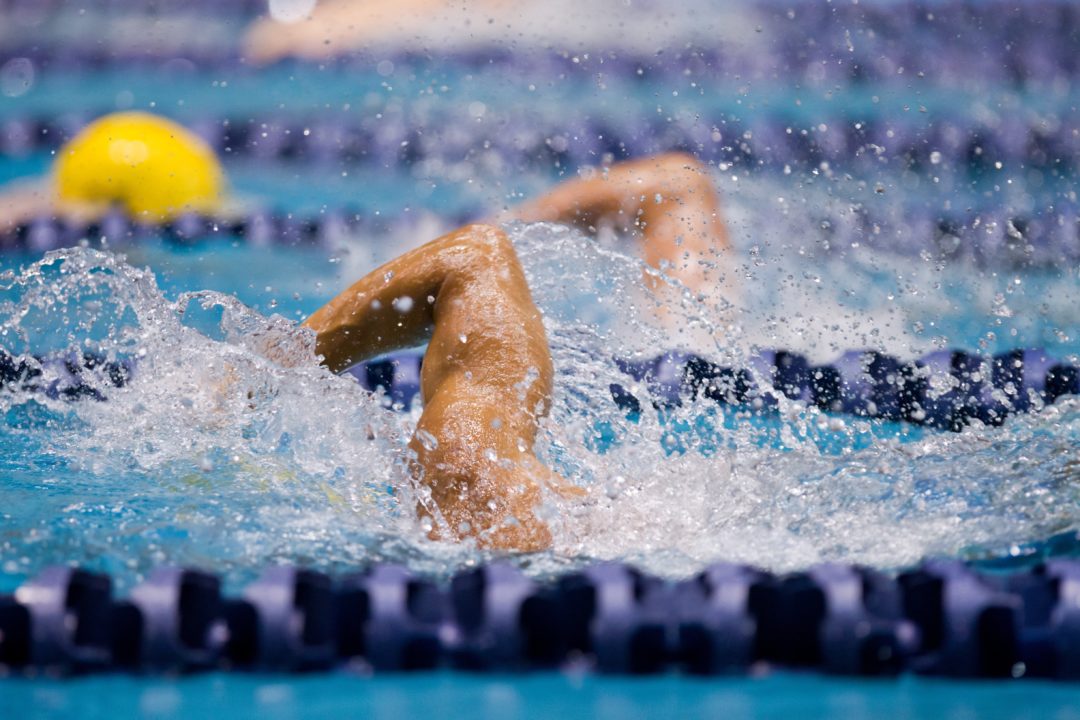 There have been a number of rules changes proposed to the NFHS. Unlike last year, most of the swimming proposals change very little about actual swimming technique. Stock photo via Tim Binning/TheSwimPictures.com

The NFHS has sent out their rules changes proposals for the 2014-2015 high school season, and among them are two of the more tedious rules for high school coaches to manage.

See all of the proposed rules changes, with entire rationales for those changes, here.

One proposal would eliminate the restriction on jewelry in high school meets: one that doesn’t exist in USA Swimming competition. The rule change proposal, submitted by Robert Lehr of Connecticut, is rationalized by the fact that it “does not create a situation of concern for risk minimization” and that the rule creates “administrative burden.”

Another proposed change is a Note addition to rule 3-2-2, the one that involves disqualifying an athlete from the rest of the meet after missing a race in a championship meet. The note would allow state associations to waive this rule, on the basis of the fact that the Declared False Start rule makes this rule almost moot: there’s “no advantage” to a team to simply skip a race as compared to filing a DFS, and it can unfairly penalize a competitor who “may inadvertently and unintentionally miss an event due to confusion or lack of attention/awareness.”

Another major change is that the rule disqualifying relays when a swimmer reenters the water during the race. Instead, Bethany Brookens of Colorado has proposed that the disqualification only happen if they interfere with the race, but that the offending swimmer should still be disqualified from the rest of the meet even with no interference.

In Brookens’ rationale, she feels that there is NO rationale for penalizing the entire relay.

Scott Morrison from Maine proposed multiple rules. One includes requiring competitors to put their foot at the front edge of the platform when the referee blows the long whistle, rather than when the command to “Take your mark” is given. Morrison feels as though the current rule causes unnecessary delay from the few who don’t immediately put their toes over the edge.

In a related change, Morrison wants to change rule 8-1-5 that allows swimmers to leave the block on the command “Stand up.” He believes that this is a safety issue when the blocks have fins on the back.

Striking the no jewelry rule is a great idea! The fact of additional administrative duties is absolutely correct. What was the origin of this rule? Probably a Basketball or Baseball rule that naturally fits all sports.

I have a better idea – can we strike the entire NFHS rule book? It is a complete mess. Just use the USA Swimming Rule Book…please?

I definitely wouldn’t mind scrapping the no jewelry rule, but I think it does have at least one possible benefit: keeping things out of the pool. I had a swimmer lose a cap in the middle of his 50 free this year at our state championship meet. The swimmer in the next heat literally swam over it before finally got the starter’s attention to delay the following heat so we could fish it out. I can definitely see swimmers losing earrings, wristbands, hair scrunchies, etc. To some degree, that’s their problem, and I wouldn’t oppose the rule change, but just a thought. Regarding rule 3-2-2, I think it depends on the championship format and the ability of alternates to swim… Read more »

@ THETROUBLEWITHX: I completely agree with you regarding swims in finals; it’s not right for one team to just skip a finals race (and take away potential swims/points away from other teams). But doesn’t USA Swimming have rules about this as well? I remember as an AG swimmer in the 1990’s that missing a race in finals (or one that required a positive check-in) resulted in getting DQ’ed from a swimmer’s next race. Maybe it’s changed since then… I think what some HS coaches don’t like about 3-2-2 in its present form is that it also penalizes swimmers for missing races in PRELIMS. Personally, as a HS coach, I don’t mind it: HS meets aren’t like 3-4 USA swim meets… Read more »