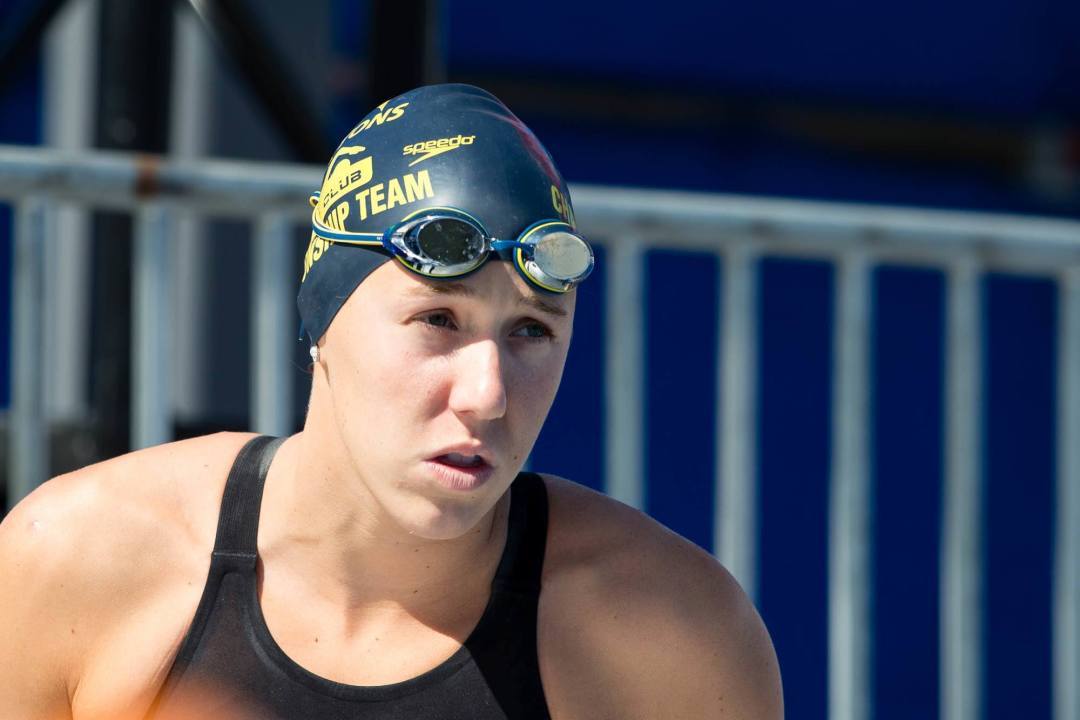 The fastest 100 yard freestyler in history has decided to stay at home and train for a year before heading off to Cal. Archive photo via Tim Binning/TheSwimPictures.com

High school senior Abbey Weitzeil has decided to defer her enrollment in Cal until after the 2016 Olympic Trials and Olympic Games, she confirmed to SwimSwam on Tuesday.

“It was a tough decision, but I decided to stay with Coley (Stickels) for a year to keep up the same training I am doing now,” Weitzeil said. “Coley knows me and my swimming best and sticking with what has been working well, as well as trying some new things that he has in mind, is what I feel could benefit my swimming the most. Although I am staying here for a year, I can’t wait to start my journey as a Golden Bear next year!”

This means that Weitzeil will continue training under Coley Stickels at the Canyons Aquatic Club for one more season before joining Teri McKeever’s crew in Berkeley.

Weitzeil is the fastest American junior swimmer in history in the 50 and 100 yard freestyles (21.49 and 46.29, respectively), and the fastest ever at any age in the 100 (American/U.S. Open Record holder). That makes this decision a blow to Cal in the short-term, with top relay swimmer Missy Franklin planning to turn pro at the conclusion of this season, but it will give Weitzeil the opportunity to focus on long course training (50 meter pool) with a goal of making the Olympic Team. Weitzeil will still have four years of NCAA eligibility, if she chooses to use them all.

Last summer, the Pan Pacs team member placed 5th in the 50 meter free and 4th in the 100 meter free at the long course Summer National Championships. Overall, she was the 5th-best American 100 freestyler with the top 6 expected to be selected for the 2016 Olympic Team.

In 2012, Natalie Coughlin was the 6th-place finisher at the Olympic Trials in the 100 free with a 54.44. With the emergence of talented young sprinters like Weitzeil, Lia Neal, Simone Manuel, and Missy Franklin, along with post-grads who bloomed a little later in their careers like Margo Geer and Shannon Vreeland, the bar for 2016 qualification is expected to be much higher.

Meanwhile, Katie Ledecky, another of the top recruits in the class of 2015, has still not announced whether she will be deferring her freshman year at Stanford as well, though she has acknowledged that it’s under consideration. Ledecky was the #1-ranked recruit in the high school girls’ class of 2015, while Weitzeil was #2.

Good call – The US will need all their talent to get near Australia!

Still shocked Townley Haas and Andrew Seliskar have not opted to defer admission either. Both have legitimate shot in making the Oly team. Time will tell

I don’t know Seliskar personally, but based on what I do know, I don’t get the impression that he would have much trouble adjusting to either Cal’s academics or the stressful schedule of an elite college swimmer. Heck, given that you spend markedly less time in class in college than you do in high school, it might be even be less stressful than his life now being a full-time student at (one of) the best public high school (s) in the country. Coaching change? No doubt that NCAP is an elite program, but Murphy did “pretty well” his freshman year at Cal. Conversely, what he does he do if he defers for a year? Live at home, swim a few… Read more »

I don’t know if anyone knows, but how many college swimmers, male or female did this in 2012? I’m not sure it matters that much. Many colleges have 50 meter pools and can train some LCM practices in addition to their SCY.

The real question is were there really a lot of high school seniors with a legitimate chance of making the Olympic team prior to 2012? How did it work out for the ?I don’t recall.

I’m actually asking about all classes, not just the freshmen. How many upperclassmen as well as freshmen didn’t go to school for a year to train for the Olympics?

If Abbey truly believed in the Cal system she wouldn’t be making this decision.

I can’t wait for this summer and next!

Cal probably has the best tutors in the nation and a cafeteria to meet their needs.

Cal training should be a step up correct? Why not red shirt and focus on training? Once again can’t wait for this summer and next!

It’s probably not that she doesn’t believe in CAL’s system, it’s just that she can trust Coley’s system and count on it to work for her.

Definitely makes sense. How come they dont make the ncaa long course to prep for 2016? Im sure other swimmers would want to take a shot as well. Will most coaches train lcm regardless of the ncaa’s?

I think this a smart decision on her part. Now we just need Ledecky to follow suit.