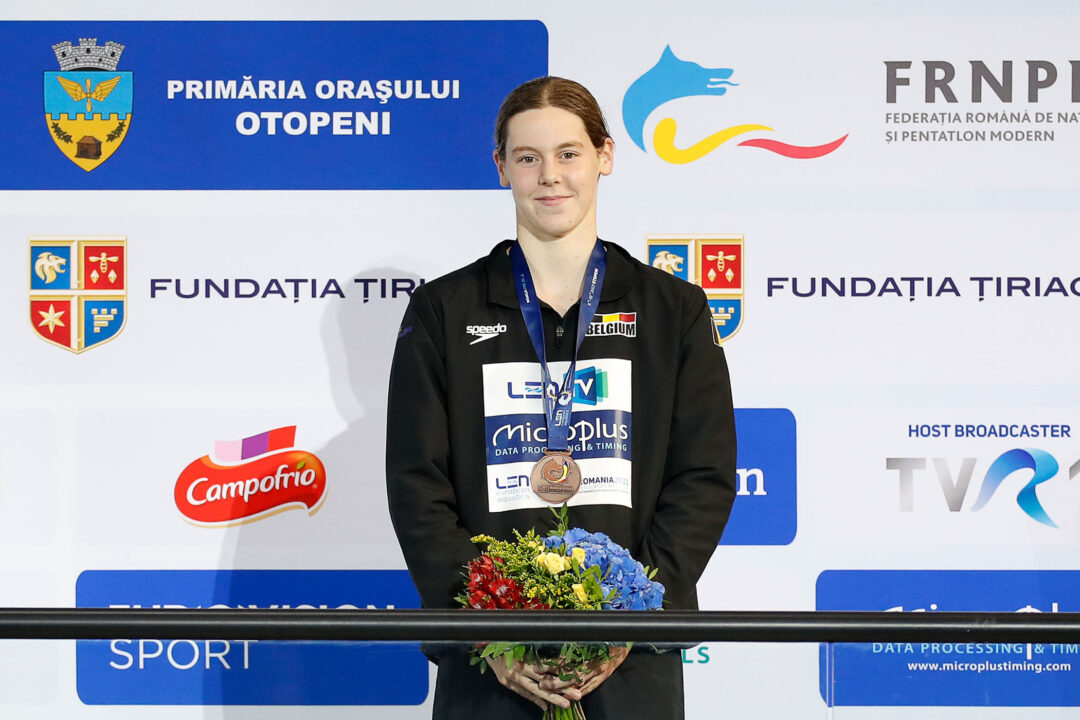 Vanotterdijk reset the Belgian Record twice in the 100 IM and came within a tenth of the mark in the 50 free as she continues an incredible 2022. Current photo via LEN/Simone Castrovillari

An incredible year for budding Belgian talent Roos Vanotterdijk continued on Friday, as the 17-year-old broke and then re-broke the national record in the women’s 100 IM.

That prelim swim qualified Vanotterdijk third into the final, where she knocked two-tenths off her newly-minted record in 59.34, placing seventh in an elite field.

Yes, she did it again in the final! Roos Vanotterdijk broke the BR 100 IM short course with a new time of 59.34! Congratulations Roos 🙌🏻👍🏻🔥 #swcberlin @sporza @VlaamseZwemFed @FredVergnoux pic.twitter.com/qEfquUi99q

Vanotterdijk came incredibly close to nabbing two Belgian Records from Buys on the day, coming within a tenth of the mark in the 50 free.

Her performances on Friday continue what has been an incredible year for the fast-rising 17-year-old, highlighted by her five-medal haul at the European Junior Championships in July. This included a gold medal in the girls’ 100 fly, scoring an upset victory over heavy favorite and defending champion Lana Pudar (also breaking another Belgian Record previously held by Buys).

Vanotterdijk also picked up some senior international experience at the European Championships in August, making the final of the 100 fly (eighth) and earning a trio of semi-final berths in the 100 free (13th), 100 back (14th) and 50 fly (14th).

She’ll be one to watch for the rest of the meet in Berlin, with entries in the women’s 100 back on Saturday and the 100 fly and 200 IM on Sunday.