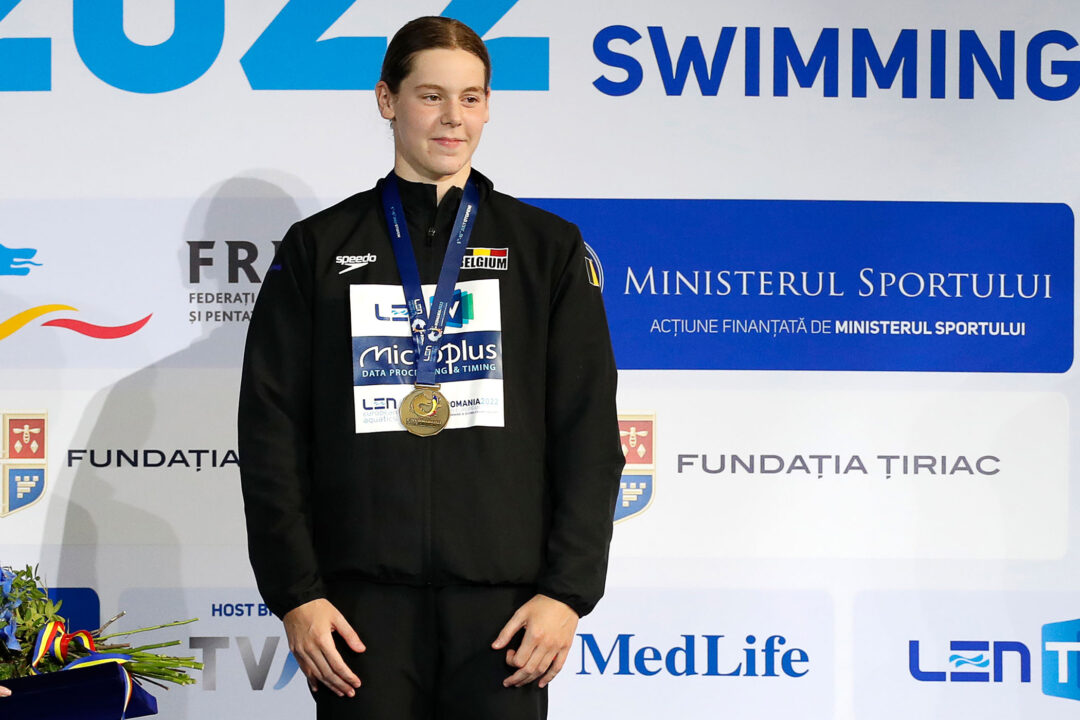 Vanotterdijk went 23 months without setting a best time in the 100 fly before dropping .45 and winning gold over Lana Pudar at Euro Juniors.

For young swimmers, few things are more difficult than getting stuck on the same personal best for an extended period of time.

That was the situation Belgian Roos Vanotterdijk had found herself in for the better part of two years in the 100 butterfly.

At 14, Vanotterdijk made her international debut at the 2019 European Junior Championships, placing 35th in the girls’ 100 free while getting some finals experience in swimming on Belgium’s fifth-place finish 400 free relay.

She then had a breakout 2020, highlighted by her swim of 58.30 in the 100 fly which made her the second-fastest swimmer in Belgian history despite being just 15 years of age.

Fast forward to the 2022 Euro Juniors in Bucharest.

Vanotterdijk, now 17, had yet to take down that 100 fly best in 23 months, having placed fourth in 58.94 at the 2021 championships in Rome, well back of winner Lana Pudar (57.56) of Bosnia and Herzegovina (Vanotterdijk did get on the podium with a bronze in the 50 fly).

In Bucharest, Vanotterdijk put up a pair of 59-second swims in the early rounds of the 100 fly, including qualifying first into the final in 59.15, with Pudar close behind in 59.28.

Pudar, fresh off of a standout performance at the World Championships that included a finals appearance in the 200 fly, was the huge favorite to defend her title, owning a PB (57.37) nearly a full second clear of Vanotterdijk’s.

But Vanotterdijk rose to the occasion in the final.

Despite trailing early, with Pudar opening up an early lead of nearly seven-tenths at the 50, Vanotterdijk somehow came back on the 200 fly specialist in a blistering 30.16, earning the title by three one-hundredths of a second.

At the finish the clock read:

In addition to the epic win, Vanotterdijk’s time of 57.85 marked a new Belgian Record, breaking Kimberly Buys‘ mark of 57.91 from the 2016 Olympic Games.

Having won bronze in the 50 back prior to the 100 fly victory, Vanotterdijk’s exceptional meet continued on Friday, as she swam consecutive best times in the 100 free to qualify for the final on Saturday.