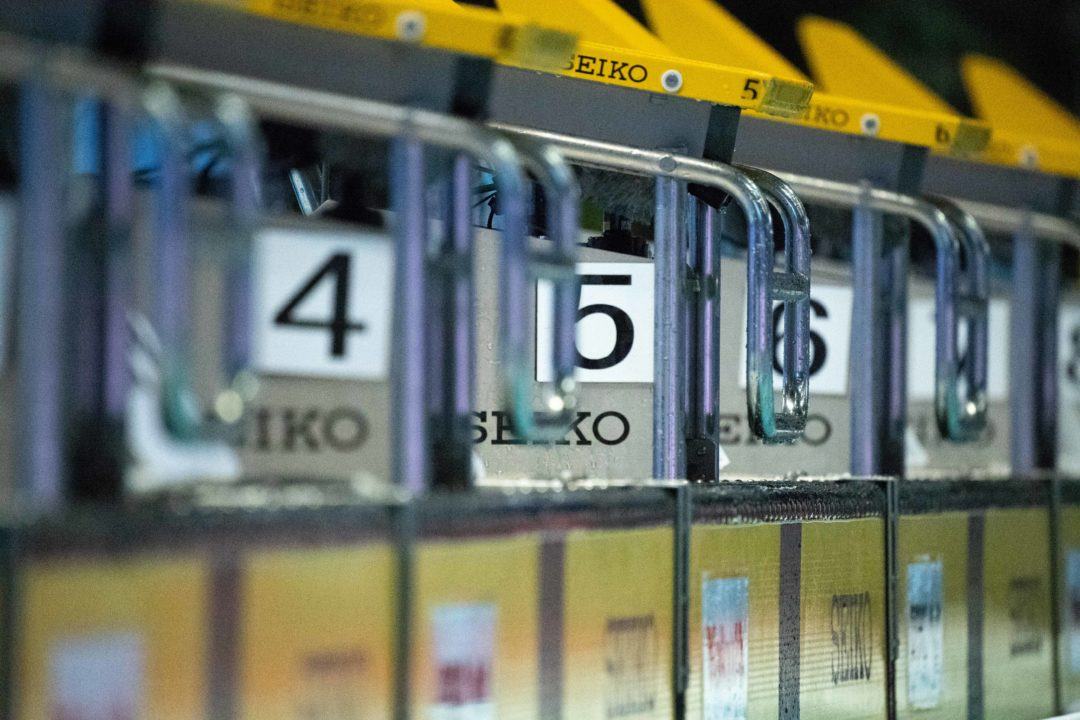 Hayes went a 24.70 to win the men's 50 fly, a lifetime best by fourteen hundredths. He was less than a tenth ahead of second place. Current photo via Mike Lewis/Ola Vista Photography

Sooner Swim Club 16-year-old Aiden Hayes shot to a lifetime best in the 50 fly, a closely contested race at the wall. One of the best young sprinters in the country, Hayes clocked a time of 24.70, shaving .14 from his old best in his fourth instance under 25 seconds. He edged 17-year-old Micah Chambers of Aquatic Club of Enid (24.79) and Greater Omaha Aquatics Leopardsharks’ Colin Lafave (24.86).

Molly Moore, a rising sophomore at the University of Arkansas representing Springfield Aquatics, went 56.99 to take the women’s 100 free. That’s a massive drop for the 18-year-old: she came into the meet with a best time of 58.62 from Winter Nationals. This morning, she was 57.29 for her third time under a minute, dropping from that 58.62, before she went down to 56.99 tonight. In yards, Moore dropped from a HS best of 51.09 to 50.18 during the course of her freshman year at Arkansas.

Caroline Theil of Aggie Swim Club, a rising sophomore at Texas A&M, went a lifetime best 27.49 in the 50 fly to edge 14-year-old Brady Kendall of the Plymouth-Canton Cruisers out of Michigan. Kendall also went a best, shaving just over a tenth off of her old best.

Yep and the 50 drops were in a jet stream…… lane 7 and 8 were oddly fast in all the 50s today….lane 1 and 2 were super fast the other direction. Not fair swims at all.

I’ve heard that that current is a well-known thing at Jenks. Funny, because OCCC, the old sectional hosting pool in Oklahoma, occasionally had issues with that too.

There are currents in almost every pool in the country, especially noticeable in long course. Not to mention recent international competitions (see Barcelona, Rio) https://swimswam.com/problem-rio-pool/

Not quite. It would be redundant had the comment included an exclamation point, since then it would be the Viking screaming “Antonio Thomas actually picked up the Trials cut for the 400 within that 800…!” However, we already know that the exclamation point should be there implicitly, since the Viking is always screaming by virtue of its name. The screaming Viking is not actually screaming “The Screaming Viking,” but rather just the comment that was posted. Kind of how you aren’t saying “Ol’ Longhorn” when you post. You are just saying what is included in your comment. Same applies to the Viking.

Actually, you’re both a bit off. An exclamation point is always incorrect if you are not typing in all caps. Hope that helps!

Yeah, when you are a Viking you don’t have to say much as your mere presence screams for you.